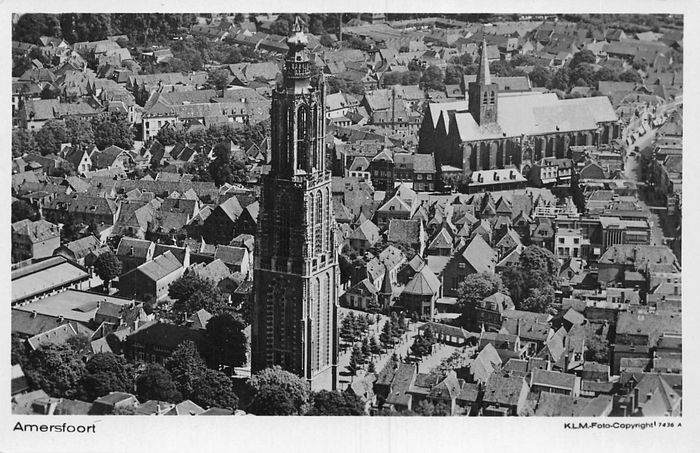 Heritage Hall has a rich collection of documents related to World War II. They offer windows into the experiences of Dutch people who lived through the war and the German occupation, members of the resistance movement, and American soldiers.

The letter describes the experiences of people evacuating Amersfoort when Germany invaded the Netherlands in May 1940. We have a typed version of the letter in Dutch and a hand-written English translation. I’ve used the translation, editing it slightly for clarity using the Dutch version as a reference. Below is the first half of the letter. I’ll post the second half in a subsequent blog post.

An accompanying note written on June 10 by her husband emphasizes that while they live in uncertainty, the children should not worry about them. The parents do not worry too much about this “temporary life” because their trust is in God “who made heaven and earth and who reigns according to his wisdom.”

Received notification to get everything ready to evacuate: take food sufficient for two days, clothes needed, and a blanket. Gas and electricity and water to be turned off, curtains and drapes open, and deliver house key to police headquarters.

Now Saturday morning. Orders to be at designated spot at 8:30 AM. All stood waiting outside, loaded with bags and blanket. There told to group; a bus arrived for the aged and sick. Clothing and blanket were loaded with name and address and also deposited on the bus. It was a sad sight.

We walked to the railroad station and boarded a passenger car at eleven o’clock in groups. We were in a second-class car and fairly comfortable. The railroad stations were all deserted and very quiet, especially the station in Amsterdam, which was filled with military groups. Men with pails of water walked along the train and provided water for the thirsty refugees. We continued our journey and safely landed in Bergen.

The group that left after we did was not quite so fortunate. When they arrived in Amsterdam an air riad alarm was sounded, and they were forced to go down into the air raid shelter in the basement of the station, which was quite disturbing. But quiet returned soon.

When we arrived in Bergen our baggage had already been unloaded, and the people proceeded in a long line, following the baggage, until we arrived a refreshment stand, when all received a cup of coffee. It was an unforgettable moment. We also heard machine guns being discharged, which filled many with dread.

The people were again grouped, as before, followed push carts which carried their baggage, and thus they were taken to their temporary abode. Just before we arrived at our destination there was another alarm, and all were forced to seek shelter in nearby woods.

That was a strange arrival, but we were received most hospitably, as if we were members of the family, even though our arrival was unannounced. Your father and I were assigned to a beautiful, large bedroom, and the Veenstra and Monster girls were given an adjoining room, all very fine and serviceable. It was all too good for us.

The family consists of three persons, Mrs. Gorter, Marie, and Sientje. It is a beautiful country home, and we may also enjoy the garden and other things. We slept well that night and went to church on Sunday morning. The service lasted half an hour, and soldiers with loaded guns stood in the rear of the church. It was touching to see all these people gathered here. We felt one in the Lord in these sad moments.

When we returned, the coffee was ready, and we felt at home. Mrs. Gorter and the girls are very friendly and willing to help us in many ways. Sunday afternoon Miss Van der Veen also arrived and received a room in this house. We cannot be thankful enough that we are enjoying such exceptionally fine facilities.

On Monday we often heard heavy gunfire, because there is an airport nearby.

Tuesday May 14. Now we all know that it was a day of tension. After we first heard that the princess was in England, we heard an even more disturbing report that the queen and her cabinet were going to England. It was shocking to hear on that same day from the commander in chief of our armed forces that the Netherlands had surrendered, but it is understandable. The Dutch military strength cannot compete with the vast German strength, and thousands of soldiers had already fallen, and the bombardment in Rotterdam undoubtedly cost many lives.

The story will continue in a subsequent blogpost.