The Madison Campus, Then and Now 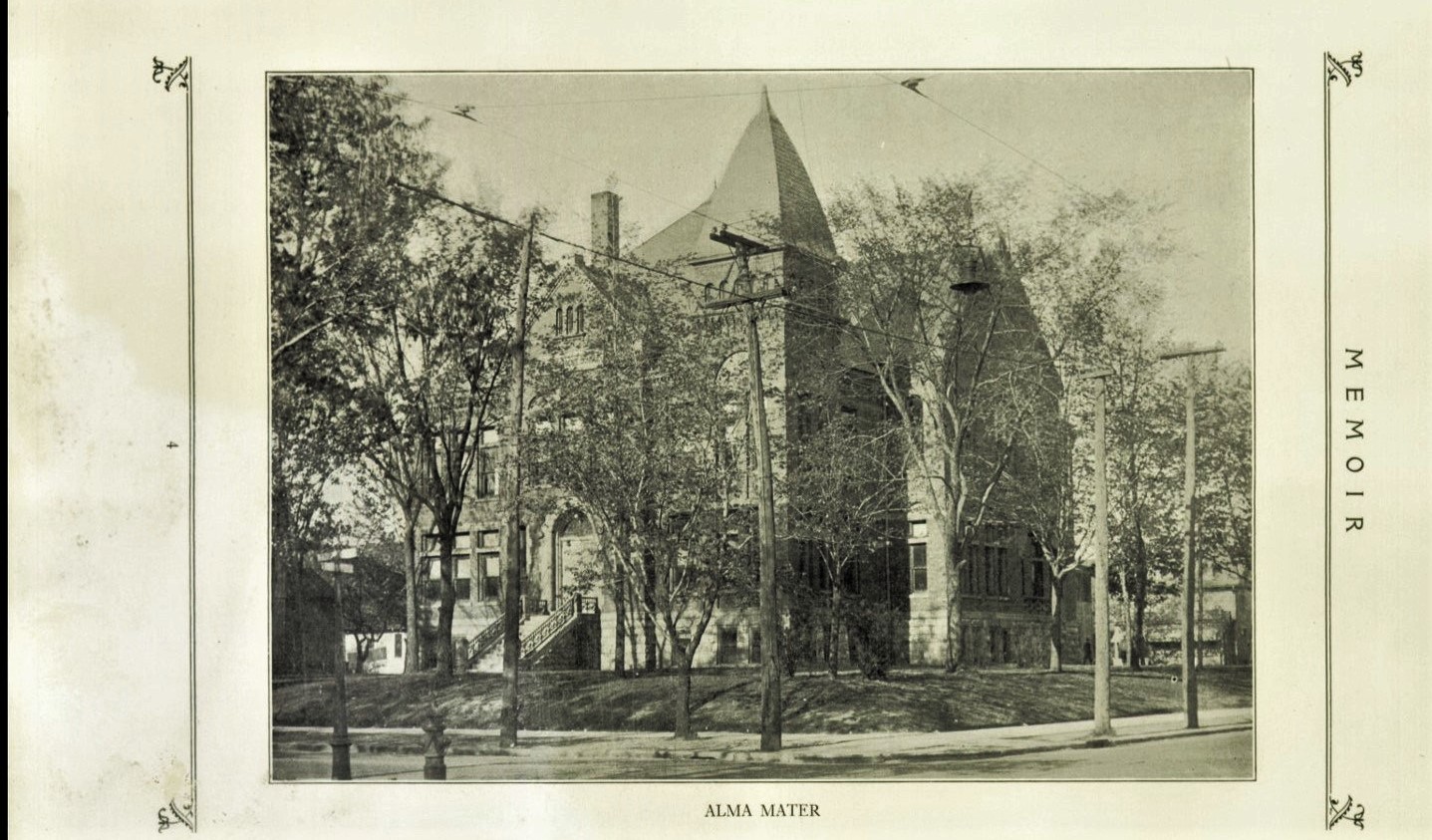 The current Calvin University and Calvin Theological Seminary campus–named after the “Knollcrest” farm, purchased in 1956–is the fourth for two institutions. Earlier Calvin campuses, going back to 1876, were on William Street, Madison and Fifth, and Franklin Street. This rephotography post focuses on the Madison campus, at the corner of what is now Madison and Franklin.

The Madison campus was used by the “Theological School” and the preparatory school (or “literary department”) associated with it from 1892 to 1917–along with Calvin Junior College, which started in 1906. Below is an early black and white of the campus, paired with a photo I took this month. (To see a larger version of the images, “right click” on them and then click on “view image.”)

Here are a few more images–a color postcard, including images of several faculty, a color photo I took this month, and a photo of male and female students at the campus in 1910. The first women were admitted to the preparatory school in 1901.

As noted above, the Madison campus was located at Madison and Fifth. Not only have the buildings changed. So have the streets. In the 1890s the Theological School was the corner of Madison and Fifth; by the 1910s, Fifth had been renamed Franklin.

The two maps below compare the neighborhood now to then. First is a map of Grand Rapids today (snipped from Google Maps), the second a Sanborn Fire Insurance Map from 1895. The location of the Theological School and preparatory school is circled in red on both maps.

The next four images are detailed maps from Sanborn, showing the campus in 1895 and 1913. You can find maps like these at the Library of Congress website.

The first two images, from 1895, show the “Madison Av. Public School,” in the lower right corner, and the “Theologische School (Holland),” in lower left corner, across the street.

The second two images do the same for 1913. You can see that the neighborhood was filling in with more houses, that street names had changed, and that the “Holland Theological School & Calvin College” had added two buildings, one of them labeled as a “Chemistry Laboratory.”

Here’s a photo of the Madison Public School (date unknown) and the parking lot today where the school used to be (taken this month).

The Theological School and Calvin College moved to a new, larger campus to the east on Franklin Street in 1917, the third Calvin campus. The third campus was home to Calvin from the 1910s to the 1960s. The transition to today’s Knollcrest campus took over a decade, starting in 1960 and concluding in 1973.

In 1920, the newly formed Grand Rapids Christian High School took over the old Madison campus. It made a series of additions to its campus over the years and then tore down several buildings and built a new facility.

The Sanborn map below shows the school in the late 1940s–the blue, red, and yellow building complex featuring a new facility completed in 1947, according to the map.

Here are a series of pictures from 1925, 1937, and 1956, taken from Grand Rapids Christian High School yearbooks. The building in the 1956 image is recognizable as the one at the corner today. The second building in the 1956 image is the old Madison Public School building, which had become part of the Christian School system by 1956. In addition to the changes in the buildings, you can see changes to the streets.

Finally, below is the old Grand Rapids Christian High School building today. In 1972, the high school sold the property to Kent County, which renovated the building and used it as a Department of Social Services facility until 2009. I took the pictures this month. You can see that the building is undergoing remodeling. The two old red brick buildings in the second and third images are from Calvin’s Madison campus days. Today they look to be apartment buildings. Notice the satellite TV dishes.

In 2009, Ed De Vries, a Grand Rapids Christian alum and local developer, bought the property and the parking lot where the Madison Public School once sat. In 2015, he donated them to Madison Church, which is renovating the building.

Madison Church is returning the property to its Christian roots. “Our vision of using the first floor for community and church and providing housing on the second and third floor is becoming a reality by partnering with Inner City Christian Federation and the Early Learning Neighborhood Collaborative,” explains Madison Church’s description of the project.

The newest vision for the property reflects how both the Christian Reformed Church and Calvin seminary and university have evolved over the past 150 years. Both have always been part of the city. And their vision for what that looks like has grown more inclusive.