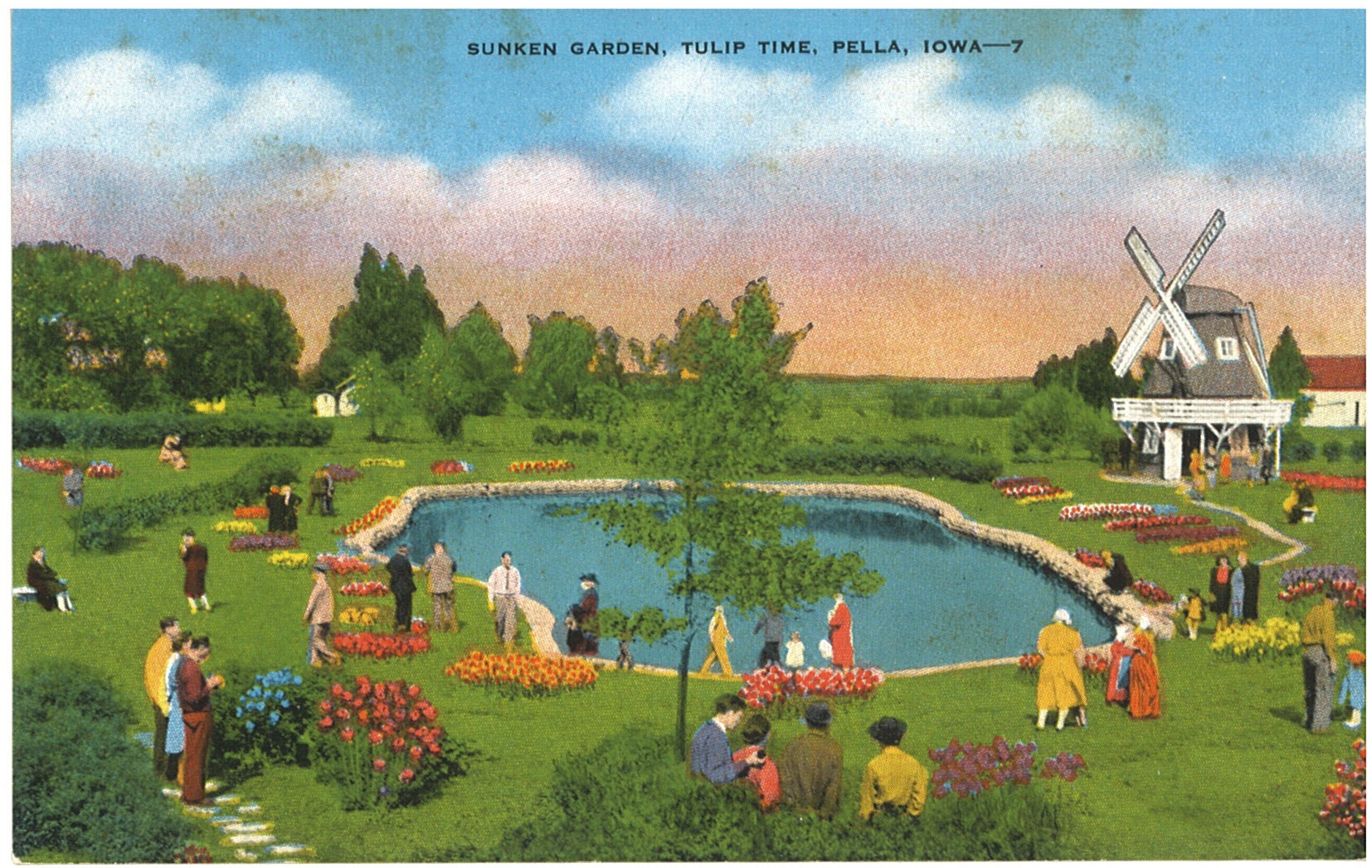 Tulip Time in Pella, Iowa, seems so innocent in this mid-twentieth century postcard from the E.C. Kropp Co. of Milwaukee, Wisconsin. But was this ethnic festival a sign of something untoward in the American heartland?

Were Dutch Reformed “colonies”–as the immigrants themselves called them in Michigan and Iowa in the 1840s–a form of “Dutch Imperialism”? Historian Andrew Klumpp plays with this idea in an interesting blog post entitled “Little Empire on the Prairie.”

Dutch empire building in the “Golden Age” in the 1600s included holdings in Asia, Africa, and North and South America, Klumpp notes. But the Netherlands lost most of those holdings by 1700. New Amsterdam became New York. Nonetheless, a Dutch empire persisted into the twentieth century, most notably in Indonesia, Suriname, and the Netherlands Antilles.

But what about immigrant “colonies” founded in the United States in the mid-nineteenth century (and later in Canada)?

Empire comes in many forms, scholars of world history argue, not just territories conquered militarily and administered directly by the colonizing power. Empire also can be based on influence and be informal, in “networks” of “bureaucracy, correspondence, trade, transportation, migration, law, administration, information, diplomacy, and culture.” Dutch “empire,” then, was not just about military conquest and decisions made by the officials in Amsterdam and The Hague, and not just about colonies like Indonesia. Dutch “empire” also perhaps included the American Midwest and Great Plains.

From this point of view, the Netherlandish Association for Emigration to the United States of North America and the Christian Reformed Church were part of a global network of Dutch influence. And figures like Henry Scholte (in Iowa) and Albertus van Raalte (in Michigan) were agents in this network. So too was  Father Theodore J. Van den Broek, a Catholic priest who promoted Dutch emigration to Wisconsin in the 1840s.

Dutch immigrants were under the direct authority of the United States, of course, Klumpp emphasizes, and loyal to their new nation. The immigrants and their descendants became citizens and steadily assimilated in the twentieth century. But they also maintained ties to the old country through economic, cultural, familial, and church networks. A sign of the ongoing connection has been visits to places like Grand Rapids by Dutch diplomats, business people, religious and cultural leaders, and, yes, royalty (most recently in 2015).

So, while there’s nothing untoward with Tulip Time, Klumpp’s blog post illuminates networks of influence in an interesting way.

For more rich discussion, read Klumpp’s blog post at S-USIH, the blog of the Society for U.S. Intellectual History.