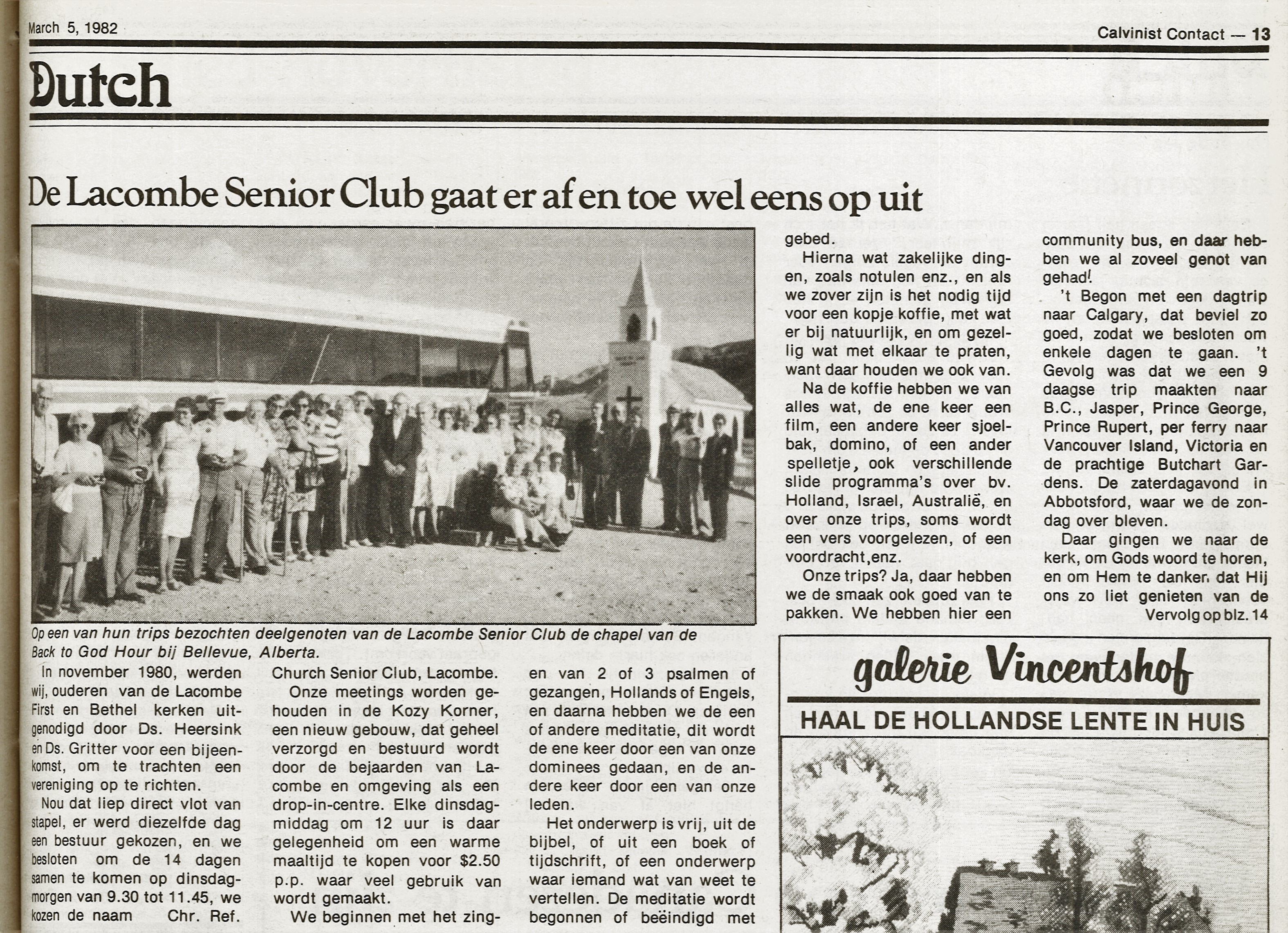 What shapes an identity and makes a community?  What did I experience in the Dutch Reformed immigrant communities that I grew up in during the 1970s and 1980s in southern Ontario, Canada?

In last week’s blog post, I focused on the sounds, sights, tastes, and smells that shaped the ethnic and religious communities in which I grew up. Spiritual comfort and comfort food are different things. But in our experience, and emotionally, we can’t really separate them. They come as a package.

In this week’s blog post, I’ll focus on another thing that shapes identity and community:  networks of people and institutions. Networks don’t sound as delightful as yummy ethnic food, I’m sure. But there’s a connection.

The ease with which Dutch Reformed folk made connections with each other, figuring out people that they knew in common, was striking. My father is a master at it. Think of it as “Dutch bingo.”

One of the best historical sources to catch a glimpse of the institutions and networks of the Dutch Reformed community of my youth is back issues of Calvinist Contact (CC). It was an “institution” in my youth. Its roots go back to the late 1940s, when Dutch immigration to Canada was taking off, including my mother’s family in 1949. Calvinist Contact is celebrating its 75th anniversary this year.

When I was an adolescent in the late-70s and early-80s, CC was the place to go to know what was going on in the world–for the Dutch Reformed immigrant community in Canada. CC wrote about the wider world in which we lived. And it shaped our smaller ethnic and religious world.

I’ve picked the 5 March 1982 edition to look at for this blog post. I was in grade 10. The front page has stories about a “larger role for Canada in human rights,” the “Polish Church survives martial law,” and “Christian schools prepare themselves for the computer.”

I remember all those things. Pierre Trudeau was prime minister and the new federal constitution of 1982 and human rights were major parts of his platform. The Cold War was heating up again in the early 1980s, with the communist suppression of the Solidarity movement in Poland. And we got computers in Smithville District Christian High. Green monitors. No floppy disks. They used cassette tapes for data and programs. I remember them as a curiosity. But several of my classmates ended up working in the computer industry. My English teacher is still working at SDCH. And a friend from my undergraduate days at Redeemer College teaches there today. (“Bingo!”).

Inside the 5 March edition are stories and columns–some in English, some in Dutch–about mass media, theological controversy, pastor-church relations, missions, the social gospel, Hare Krishnas, Redeemer College (it would open later in 1982; I went there two years later), Christian Reformed congregations and local Dutch immigrant communities, books, and more. We knew the people writing the stories, or knew people from their families or churches, or at least knew them by Dutch Reformed reputation.

These stories shaped how we understood our worlds, small and big. But it is in the ads and “classified” section where you can see the networks and institutions that shaped everyday life. News about births, marriages, anniversaries, deaths. Ads from across Canada from Christian schools looking for teachers. Dutch Reformed folk looking for jobs or employees on dairy farms and in manufacturing. Personal ads. (In one a 40ish dairy farmer is looking for a “serious lady” 30-40 years old.) Calendars of church, arts, and political events–e.g., a Christian Labour Association convention, with Bernard Zylstra from the Institute for Christian Studies in Toronto speaking. Our people, our institutions. Onze mensen, onze instellingen.

Three ads stand out for me as representing the larger immigrant experience. One is from KLM, the Dutch national airline, selling trips to the Netherlands. Many in the immigrant community still had family “back home” in the “old country” and visited. Siblings, cousins, parents, aunts and uncles. But the experience of immigration was becoming distant enough to be memorialized. The second ad (see below) reflects this. It announces the sale of Delft Blue-style tiles (very Dutch!!) depicting the immigrant ships that brought immigrants to Canada after World War II. Among them is the Groote Beer, which my father’s family came on in the mid-50s.  The third ad is from the government of Ontario, in Dutch, celebrating Canadian pride in the new federal constitution of 1982. We were citizens of Canada and proud of that too.

Today, reflecting the ongoing Dutch Canadian story, the paper is called Christian Courier. Its deep roots remain Reformed. It still has a bit of a Dutch flavor. And it’s as lively as ever. But Christian Courier now speaks to Christian and Canadian audiences beyond the immigrant community that founded it. I have friends who write for it. And occasionally I see a notice about a birthday or death, etc., of someone I know.

As a graduate student at the University of Notre Dame in the late 1980s, I experienced how “ethnic bingo” is not unique to Dutch Reformed folk but common among immigrants. Irish Catholics and Italian Catholics, I soon discovered, had similar kinds of insider stuff going on. The details varied but the “grammar” or logic of Irish and Italian “bingo” struck me as similar to my experience.

A small story from 5 March 1982 issue of CC pulls all of this together for me. In a piece entitled “Skylights,” William R. Rang wrote about a father, a “mum grower,” that he knew. Greenhouses were a big part of the Dutch Reformed economy where I grew up. I worked in tree nurseries and greenhouses for about 10 summers.

In his story, Rang wrote about how the father thought that his rebellious daughter perhaps was coming back to the church. Rang compared the care and patience a grower practices to nurture plants to describe the father and daughter.

The content of the story speaks to my church and work experience. I remember “Mr. Rang,” a lay preacher, occasionally leading worship services in my church. His son Lloyd, one of my best friends from high school, college, and university days, writes for Christian Courier today. Bingo.

The cover for this post is a story from the 5 March 1982 edition of Calvinist Contact about the Lacombe Senior Club in Lacombe, Alberta (about two hours north of Calgary). It describes the club’s mission as a mix of hymn singing, prayer, social time, food, coffee, outings and trips, and Christian education. The picture is of the trips of the club, to chapel of the Back to God Hour in Bellevue, Alberta.