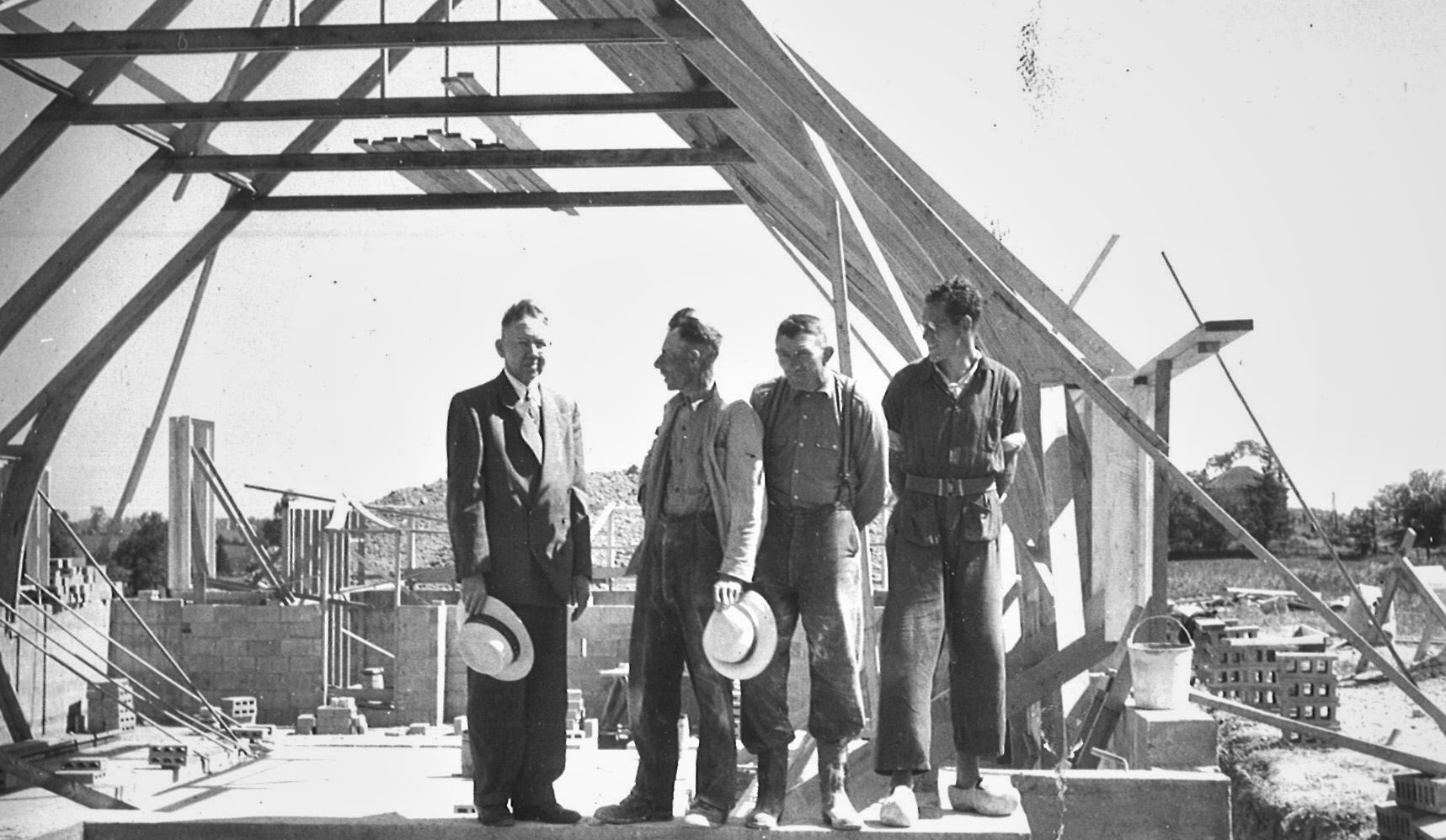 The stories of churches and families are intertwined. My grandfather, Frank Visscher, and his family emigrated from the Netherlands in March 1949, arriving in Canada on the RMS Aquitania in early April. He had been a prosperous farmer in the Netherlands. But he wanted land for his children, and there was little available where they lived in the province of Drenthe.

The family had talked about going to South Africa, where there was a large Dutch settler community. But by 1949 they had chosen Canada, where there were plenty of farms. Before they left, a local newspaper asked my grandfather why he was not afraid to go.

Thinking back to the war, and to trials endured by his family going back to his childhood, he appealed to faith, telling the newspaper: “The same God that lead us here and helped us through a lot of things will be in Canada too.”

[To see larger versions of the photos in this story, right-click on them and then click “view image.”]

Charles Spoelhof, a home missionary from the Christian Reformed Church (CRC), helped the Visschers find a sponsor—a farmer and minister in a Mennonite church near Drayton, Ontario, southwest of Toronto. Three days after arriving in Drayton, my grandfather purchased the farm. The younger Visscher children went to school, and the older ones worked the farm and got jobs to support the family.

Born and raised in Paterson, New Jersey, Reverend Spoelhof worked out of Kitchener, Ontario. From the late 1940s into the early 1960s, he helped sponsor immigrants and start CRC congregations in southwestern Ontario—in places like Kitchener, Woodstock, Drayton, Stratford, Listowel, and Clinton. Later he did the same in British Columbia, eastern Ontario, and Quebec.

The land was not the whole story for the Visscher family. “When we can’t go to Canada and join a church that is suitable for us,” my grandfather remembered in 1978, “we can’t go.” Spoelhof played a key role here as well.

My grandfather had been active in his church and in local politics in the Netherlands, and he did what came naturally to him in Drayton. He started organizing, working with other recent Dutch Reformed immigrants—such the Van Elswyk and Van Veen families.

With Reverend Spoelhof’s support, the families began to worship in a home in mid-April 1949. My grandfather read the sermon when Spoelhof could not be there. They soon needed more space, with new immigrant families arriving regularly. In June they started using Knox Presbyterian Church in Drayton for worship services, paying rent of $2.00 a week. The CRC created an official congregation, First CRC in Drayton, in June 1950. My grandfather was one of the first two elders, along with Gerrit Vander Heide.

The new congregation had more than a dozen families and almost 100 members. It worshiped on Sunday afternoons and held Sunday School and catechism classes afterward. It started a young people’s group and women’s and men’s societies. When they celebrated the Lord’s Supper, Reverend Spoelhof borrowed the Communion set from Kitchener CRC. They began having services in English, once a month, in 1951.

Drayton CRC quickly outgrew the Knox Presbyterian facility. In 1952, the congregation built a “basement church,” purchasing land suggested by my grandfather. It was centrally located for the immigrant farm families in the area. The congregation also called its first minister in 1952. Reverend Andrew Folkema was a Dutch immigrant himself and had served CRC congregations in South Dakota, Iowa, and Illinois. By 1959 there were 75 families. In 1963, led by its third minister, Lambert Doezema, the congregation decided to demolish the basement church and build a facility that could hold 600 people.

The Drayton congregation soon turned from needing help from the denomination to supporting it and serving in it. For example, the first immigrant from Drayton CRC to go to Calvin College and Seminary and become a minister in the CRC was Arnold (Arend) Rumph, a Drenthe boy. He graduated from the seminary in 1957 and served churches in Ontario and then as a missionary in South and Central America.

Other’s soon followed. My uncle John Zantingh and my father Henry Katerberg graduated from the seminary in the next decade, in 1961 and 1969. Both had emigrated to Canada from Drenthe with their families and had met and married Visscher girls (Alida and Jean) in Drayton.

When he retired in the mid-1960s, my grandfather bought the house next door to Drayton CRC. I remember reading in books in his library and shooting pool with him on a table in the basement.

The story told here focuses on Frank Visscher and a few other men in the Drayton community. That’s because I have a copy of his journal and an oral history from him. There are just as many stories to be told about women and children in the histories of churches and immigration.

My mother, still a teenager, quit school and helped run the Visscher household in the mid-1950s. She took over when her mother got sick and then passed away in 1959. In the past decade her younger sister, my aunt Thereasa, collected and digitized the family’s genealogical data, photos, and immigration records, along with my grandfather’s journal and an oral history done with him in the 1970s. She gave me a copy of her work and I used some of her material for this post.