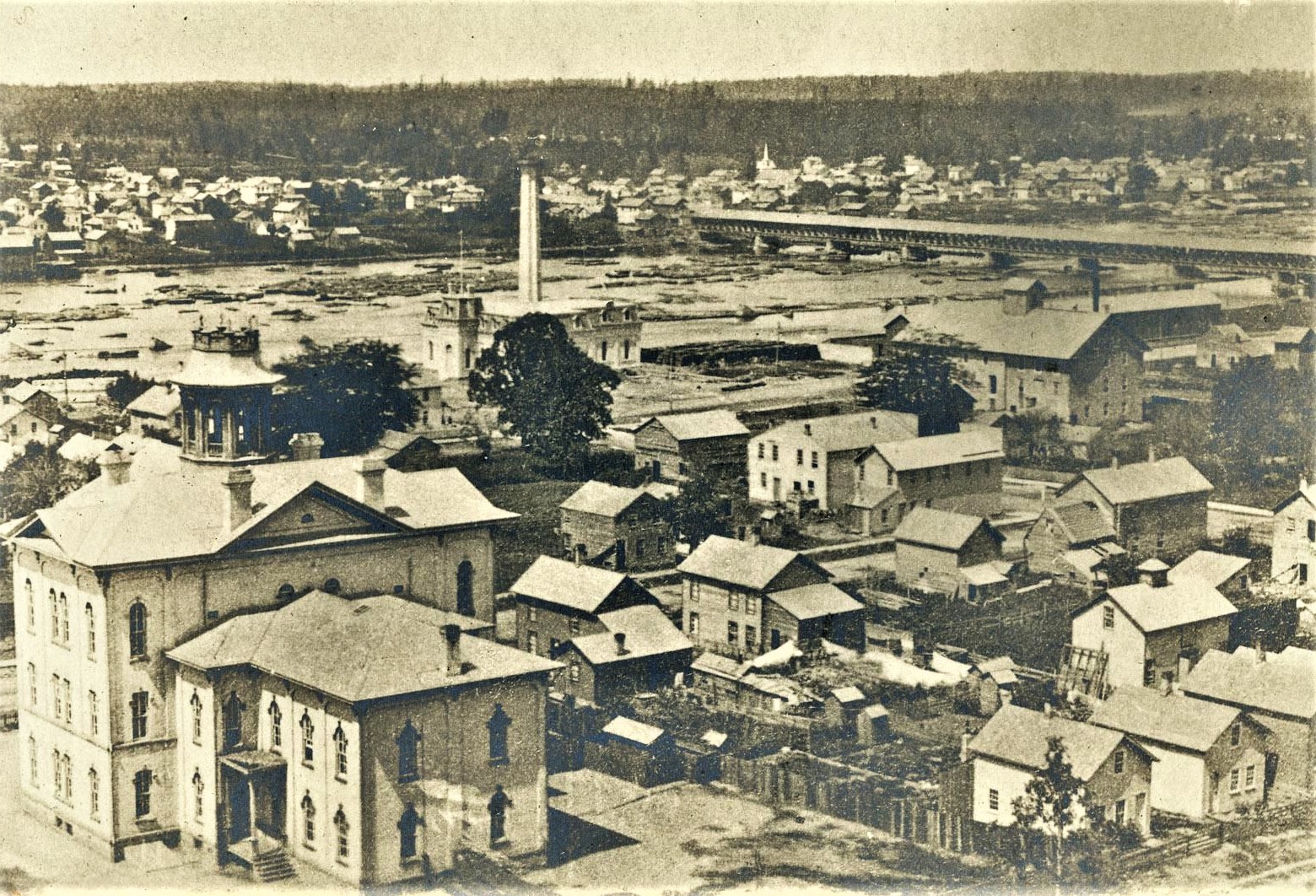 Boys racing homemade bobsleds down the Bridge Street Hill in Grand Rapids hit Willem Hendrik de Lange in January 1874. “On the evening of this accident,” De Lange’s father-in-law reported, “he left our house in good spirits.” Shortly after, six to eight big boys on three sleds “came down with amazing speed–faster than a locomotive at top speed.” One of the sleds ran into De Lange, throwing him “eight feet in the air.” De Lange hit the ground unconscious, fell into a coma, and died two days later.

The recent immigrant had come to the U.S. from the Netherlands only six months earlier. He left a widow and four dependent children. And yet tragedy, however remarkable this incident may be, is anything but uncommon. Why remember de Lange at all, except perhaps in the obituaries of a local newspaper like the Grand Rapids Daily Eagle?

We probably would not remember De Lange but for two fascinating letters, he sent to the Netherlands shortly before his death. The letters described the rapidly growing city from the viewpoint of an unusually skeptical new resident.

In the first of these letters, De Lange shared several unflattering opinions regarding Grand Rapids and its residents. Of the landscape, he wrote, “Nature does not produce much beauty here.” He complained of a lack of natural life–unsurprising as his short time living in Michigan fell largely in the fall and winter. Waxing poetic, he noted, “You hardly see any flowers here except on Sunday when the church seems to be transformed into a flower garden carried into the sanctuary on the hats of the ladies.” As for wildlife, “There are few birds here,” he observed, “and those that are here don’t sing; they seem to be in mourning.” He also found the cold excessive and complained, “It is so cold here that sometimes you have to cover up your whole head–it seems like we have already had three winters here.”

De Lange’s take on the populace was more severe, and he had sharp words for the nationalities he encountered. He found Americans to be wasteful and uninclined to work. He was ethnocentric, with biases he brought with him or learned in the U.S. He described the Irish as “lazy and good-for-nothing.” Although industrious, “They illustrate the fact that that poverty is not restricted to the blacks who were formerly slaves.” De Lange seemed ambivalent even about Hollanders in the New World. He described them as “industrious, and miserly” and said that the “Yankee” Dutch-American children he taught were “uncivilized rascals, and not easily controlled.”

Yet so negative of a reaction was not typical among such immigrants. As Herbert Brinks, former curator of Heritage Hall, writes, “In the correspondence of about 150 other Dutch-Americans, I have found no equally dyspeptic growling. In fact, the vast majority of new-comers were favorably impressed if not dazzled by both the New World and its populace.” De Lange’s age, background, and training seem to have made it difficult for him to adapt to the new American culture.

At 47 years of age, de Lange was transplanted from the thousand-year-old Dutch city of Deventer to a new city containing a bewildering conglomeration of nationalities. Although many of his own countrymen were among the residents, he found them to be ignorant and narrow. In the Old World, De Lange had been an educated clerk in a law office, although poorly paid. This seems to have created in him a sense of distance from his fellow Dutch-Americans, many of whom were working class.

The city itself fared better in De Lange’s initial appraisal than did its populace. He praised its surprising affluence and construction. “Grand Rapids,” he explained, “is about equally divided, half on a hillside and half in the valley. Its area is larger than Amsterdam, but its buildings are not so compressed. It has a population of about 30 thousand from all nations. It has 42 churches, some of which cost $150,000. The Americans place a great deal of value on worship. There are also many factories, large stores, and expensive buildings here, including many wooden houses which are well furnished.” Although originally hailing from a medieval city, filled with centuries of architecture, De Lange was yet impressed with the infrastructure and prosperity of the young Grand Rapids.

Even in his short time in the United States, De Lange experienced some of the social mobility that drew immigrants. In the Netherlands, he would have lived out his years as a clerk, but in America, he became an educator. He attained a position as a teacher of Dutch literacy for the Spring Street Christian Reformed Church (now First CRC) and was very proud of his status. He instructed his former employer to direct any return mail to “W.H. de Lange: Teacher of Dutch.” When asked how he could simply become a schoolteacher, he answered that “America is a free country, and everyone does exactly as he pleases.” “If I wished to declare myself a physician tomorrow,” he continued, “no one would hinder me.” Teachers with diplomas were hard to come by, making an ideal environment for a literate Dutch former-clerk to increase his status.

After several more months in Grand Rapids, De Lange wrote again, but with a softened and more favorable tone. The recession of 1873-1879 had begun to affect the area. Yet, De Lange defended his new home against the impulse of some of his countrymen to return to Europe.

“I don’t advise anyone to leave,” he wrote. “Many immigrants, who have enough money, are returning to the Netherlands, but that will not help them very much because I have heard that life is no bowl of gravy [there] either. Meat is certainly cheap there, according to your letters, but not such a good buy as it is here.” Food was abundant in Grand Rapids, and his life had improved since he and his family left the Old World, despite the recession.

Both the church and the city assembled relief funds for the De Lange family at the urging of the mayor. Nearly $1000 came in from citizens of Grand Rapids and the Netherlands, totaling enough to support the family for about two years. Tragedies don’t come with silver linings, but the notoriety of the dramatic sledding accident helped De Lange’s family survive his death.

Willem de Lange’s sudden death ended what might have been an interesting example of further Americanization. His second letter was far less hostile toward his new home, and he seemed pleased with his prospects and the progress his family was making. We are left to wonder what his sharp eye and strong opinions might have led him to report as immigration and industry continued to transform Grand Rapids and America. What was a tragedy for the De Lange family also was a great loss to everyone interested in this chapter of American and Dutch-American history.

Peter Mouw is a student at Calvin University.

The cover image of this post is of the North Ionia St. School and Grand River from Reservoir Hill in 1874. The bridge is Leonard Street. This scene is west of where Willem de Lange’s accident took place. Image courtesy of HistoryGrandRapids.org (Grand Rapids Historical Commission).

This post is based on a story in the print version of Origins. For the complete story, check out “Grand Rapids: An Immigrant’s First Impressions ” by Herb Brinks, in issue 3:2 (Fall 1985) of Origins: Historical Magazine of the Archives.