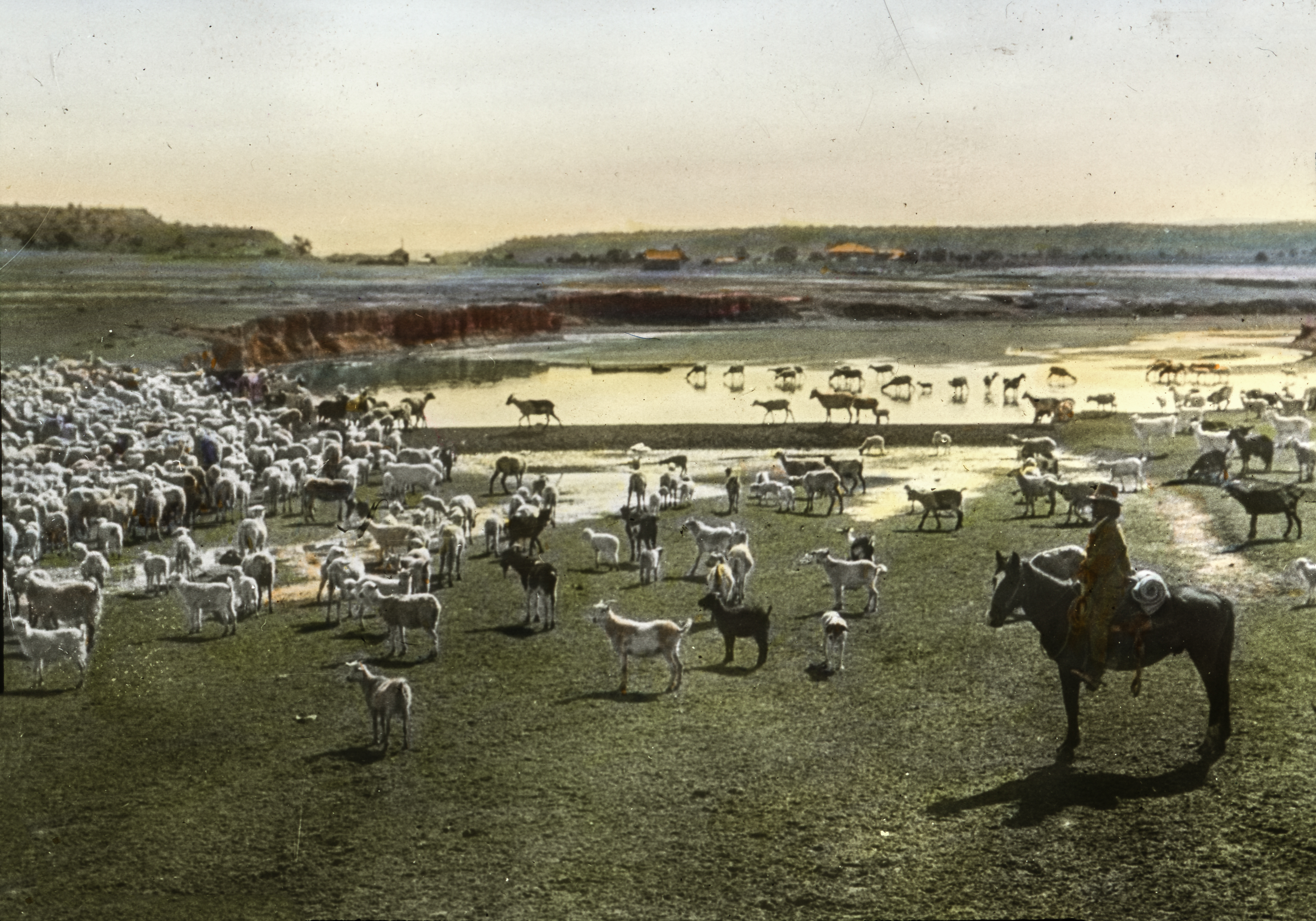 Heritage Hall has several small collections of glass slides, sometimes called “magic lantern” slides. A couple of the collections seem to be the product of traveling in Europe, the traveler buying the slides (perhaps for use in a classroom) rather than photographing sites himself or herself.

Most of our glass slides are related to mission fields, however, in China and among Native Americans in the Southwest. I am most familiar with the slides related to missions done by the Christian Reformed Church (CRC) among Navajo and Zuni communities in New Mexico and Arizona.

Missionaries used these slides when they visited Christian Reformed congregations to describe their work and to encourage prayerful and financial support of it. They told their stories and stories about Navajo and Zuni converts and used a variety of media. Sometimes a Native American Christian went along with them and told his or her own story.

Missionaries told these stories in pamphlets and articles in denominational magazines, of course. But more evocative would have been images, from glass slides in the early twentieth century to film slides and documentary films by mid-century.

Glass slides date back to the 1700s when artists painted pictures on glass and used “magic lanterns” to project them. Showmen would tell stories to go with the slides. In the 1800s and 1900s, technology developed to print pictures onto slides, not just hand paint them.

Glass slide photographs date to the mid-1800s. Their heyday, when they became common and relatively cheap, was the 1890s to the 1930s. The slides were photographed in black and white and could be colored by hand. Film slides were invented in 1935 and quickly replaced glass slides. Digital images have largely replaced film slides in the past decade.

The images you see in this blogpost are from glass slides used by CRC missionaries from the 1910s to the 1940s. They tell several stories.

One story is tourism. Some of the slides have “Sante Fe Railway” printed on the frame. The railroads in the U.S. and Canada promoted tourism in the West and build hotels near national parks and historic areas to get more passengers. Many of the slides we have were made by Edward H. Kemp and his wife Josephine Agnes Sparrow from the 1890s to the 1920s. They traveled around the U.S. photographing various regions. Many of their images are from the Southwest and depict Native peoples such as the Hopi and Navajo. Josephine Kemp wrote about their work and the people they photographed. They were just two artists among many women and men who made their livings photographing and painting landscapes and Native peoples in the West.

Photographs like those of the Kemps were made for tourists, among other audiences. They portrayed the landscape, historic sites of Native peoples (e.g., Anasazi ruins), and indigenous arts and crafts. They also depicted Native people themselves, usually in traditional garb and settings. Hotels, museums, and railroads in tourist areas sold them and also sold Native American artwork and crafts (e.g., blankets, rugs, pottery, and paintings).

The story the photos and paintings often told was of Native peoples dying off as cultures and traditions, inevitably giving way to modern life and industrial progress. The image of the Navajo men and horses looking at the sunset is a classic example of such an image, familiar in late-nineteenth and early-twentieth-century paintings and photographs. The setting sun, fading to darkness, represents a way of life passing away.

Only rarely did photographs depict Native people and communities adapting to modern life and retaining fundamental elements of their traditions and cultures. The cover image of the blog post, of a Navajo shepherd with sheep, is an example. Sometimes a photographer would “photoshop” out modern elements (e.g., photographer Edward Curtis blurring out a clock in a famous image of a Native father and son in a traditional setting and clothing).

Well-off middle tourists in the 1910s-1930s purchased artwork and crafts in large quantities. They were fascinated by the exotic landscape of the region and often drawn to what they saw as the “primitive” in Native arts and crafts. The irony is that Native peoples making and selling blankets, rugs, and pottery, or performing ceremonies and dances for tourists, were making their living in something profoundly modern and capitalist: the tourist industry.

The second story in these slides is about the relationship between missionaries/reformers and Native peoples such as the Navajo. Missionaries used some of the same photos that tourists bought. They shared the “vanishing Indian” mythology that I described above. Reformers and missionaries also typically believed that blending Native ways with modern life was impossible. Moreover, they generally thought it immoral to try. Native Americans had to give up their “heathen” practices and beliefs and become “civilized, Christian citizens of the United States.

“Kill the Indian and save the man,” Captain Richard Pratt put it cruelly (but well-meaning in his own mind). He founded the Carlisle Indian School in Pennsylvania in 1879 to implement this vision. The idea, common among reformers and missionaries, was that Native ways and communities could not be saved. They needed to be abandoned. Native individuals could be saved only by becoming modern and Christian.

Christian Reformed missionaries in New Mexico and Arizona were raised with these kinds of assumptions too. They were men and women of their time. They encountered Navajo and Zuni communities in an era of transition–conquest and coerced assimilation–for Native peoples. In towns where there were churches, a school for Native children, and a hospital or clinic, they worked with Native people in modernized settings. An example of a CRC mission station like this was Rehoboth, NM. When missionaries traveled to more isolated Navajo communities, they encountered people still practicing mostly older ways.

In the two slides below, you see (1) a family outside a “hogan,” a traditional Navajo dwelling; and (2) Reverend Henry Beets, a CRC’s director of missions in the 1920s, with a missionary touring the mission fields in the Southwest. The image of Beets (on the right, below) shows part of a metal frame around the slide. More often, frames were cardboard.

A third story these images tell is of Navajo communities and people. Artists, tourism businesses, and missionaries created and used the slides for their purposes. But we can catch glimpses of Native people, living in both older ways and adapting to modern life, and perhaps glean something of their experiences.

The cover image of this blog post is an example of a centuries-old Navajo practice being adapted by the Navajo in a modern context–a shepherd herding sheep. Sheep had long been part of the subsistence economy of Navajo communities, as a source of food and wool. They also had become a source of cash income, whether selling the wool or making blankets and rugs to sell to tourists. Herding sheep and goats was an economic practice that reformers and the Bureau of Indian Affairs wanted to encourage, but in modern capitalist form and under the control of federal officials.

In the 1930s, Department of the Interior and Bureau of Indian Affairs bureaucrats clashed with the Navajo Nation over its sheep herds. It did not understand that by tradition Navajo women controlled these herds. It did not respect Navajo knowledge of the local environment and forced them to cull their herds during the “Dust Bowl” droughts of the 1930s. This conflict shaped politics within the Navajo nation and with the government in the 1930s and 1940s.

These are just a few of the slides related to missions in Heritage Hall. When missionaries toured churches in the Midwest and Northeast to encourage support for their mission work, they used the tourist slides. The CRC also created its own slides, with images like that of Beets in a horse and buggy, maps of the mission field, and hymns to sing after their presentations.

It is a cliche that “history is written by the winners.” The cliche is not entirely accurate. In recent decades, stories of encounters between Native peoples and missionaries, and larger stories of conquest, forced assimilation, and trauma, have begun to be told from Native perspectives. Such stories have had to fight upstream against the national mythologies of the United States. But they are being told.

It’s perhaps more true to say that the sources we have are those preserved by the “winners.” The material sources we have–documents, cultural artifacts, photos–are predominantly those of Europeans and white Americans. It is easier to find records that provide missionary viewpoints, for example, than Navajo ones. We do have some records that allow us to hear Native voices, but not as many.

The challenge, then, is to learn to analyze sources “critically”–such as seeing multiple stories in these glass slides. Put another way, we can learn to read “against the grain” rather than simply go with it. And, finally, and most importantly, we can seek out and listen to Navajo voices, both those in the past and the present.

The cover image is of a Navajo shepherd and sheep is courtesy of Heritage Hall. It was produced by the Chicago Transparency Co. and sold by the Sante Fe Railway.