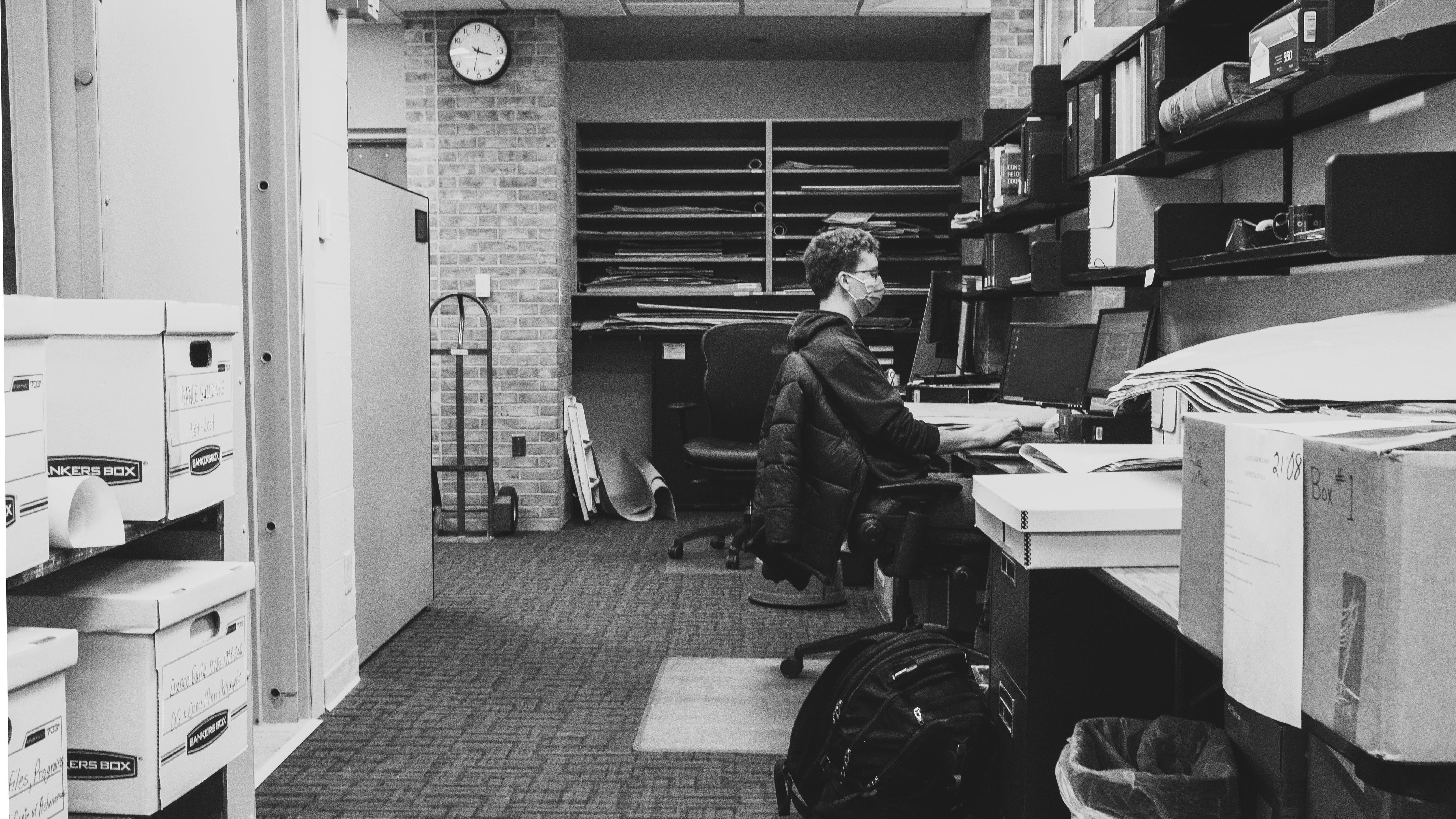 When Dr. Katerberg, the curator of the archives, asked me to write a blog post about what I do here at Heritage Hall, he suggested I use a restaurant analogy, with a ‘front-of-house’ and ‘back-of-house’ divide. I’ve waited tables in past summers, and I’ve gotten to know many of the unseen and unusual people who wash the dishes, cook the food, and make civilized dining possible.

Following this analogy, my job in the archives is roughly equivalent to the person who cuts the lemons in the morning. Prep cooks are necessary in the kitchen. But, before working in restaurants, it would have never occurred to me to wonder who was responsible for the wedge in my water. I’ve worked as a student Archival Assistant at Heritage Hall for a little over a year now; and in that time, I’ve cut quite a few lemons and gained an appreciation for the same kind of back-of-the-house work that goes into archival management systems and other online resources.

Most of my time in the archives is dedicated to our databases—reconciling them with physical collections, reformatting, and uploading them to Heritage Hall’s “Archon” online database. Behind our website’s early 2000s façade, there are thousands of lines of spreadsheet data documenting what can be found in the stacks and where.

I work largely with the university’s own inventory, containing about 1900 boxes of “Calvin College Record Group” documents and memorabilia going back to the university’s early days. A 600-page Word document from years ago became 15 distinct spreadsheets and—after a considerable amount of revision by several student workers over the past few years—is now in the slow process of being uploaded to archives.calvin.edu.

My job of revising spreadsheets and searching through acid-free archival boxes may not seem immediately riveting. But occasionally when I have to look in the collection content, I discover interesting gems from Calvin’s past that make the work interesting.

Of the many documents I’ve come across, one of my favorites is a 1989 design study that considered adding a bell tower and carillon to Hiemenga Hall. (A carillon is a set of bells in a tower, played using a keyboard or by an automatic mechanism similar to a piano roll.) According to the plans, the tower was intended to stand 100 feet tall from its base to the ridge of its roof, with an “upper room” and an “upper upper room,” in the midsection—the latter containing a study and practice space for the carillonneur.

The building’s second story has been implemented (as proposed in the design pictured here), but Hiemenga Hall remains towerless. We can only hope that the tower is included in the administration’s next wave of building projects!

Another interesting piece of Calvin College and Seminary history comes from a box ominously titled “Diekema, Calvin College Issues (1978-1992).”  In what would become a major story, a group of seminary students offered a “Nighty-Night Tuck-In Service” to Calvin’s female students.

According to their October 1981 advertisement in Chimes, they provided “a gentle tucking-in, a bedtime story, a fatherly kiss on the cheek, and lights out.” This service cost $1, with all proceeds going to the Christian Reformed World Relief Committee’s work in Sierra Leone. “Approximately 60 tuck-ins were made,” the group said. And “of the girls who commented, all found the tuck-in to be a pleasant experience,” with a total of $84 raised for charity.

Chimes reported that this service was initially met “with both opposition and delight, but mainly indifference.” This indifference didn’t last, however, as an article about the service was published by the Grand Rapids Press—one that President Diekema and Chaplain Pekelder described as an “incomplete and inaccurate picture” of the situation. The Detroit News, the Ann Arbor News, and a variety of other newspapers in different parts of the country picked up the story via the Associated Press wire. Heritage Hall’s collection has a few of these clippings, as well as dozens of letters of concern and anger about the matter sent to President Diekema.

When asked why this fundraiser was approved, Chimes reported the Dean of Women’s reply; she “believed criticism from the student body would be more effective than any criticism that she could put forth by not approving the service.” Attitudes on issues like this have changed over the years. However, the presence of male seminary students in the dorm bedrooms of female undergraduates likely would be no less uncomfortable for many on campus today than it was for many in the Calvin community in 1981.

Another interesting item, stored on top of the stacks in the college collection, is a small, easy-to-overlook shovel. A plaque on the side reads, “Used in Tree Planting Ceremony by Her Majesty Queen Beatrix, June 26, 1982.” In celebration of the Netherlands-American Bicentennial (Twee Eeuwen Nederland-Amerika), Queen Beatrix took a month-long tour of several American cities, with Grand Rapids among the final stops.

The collection has numerous letters of invitation from president Diekema to notables in the Calvin and Grand Rapids communities to “celebrate the two-hundredth anniversary of the signing of the Treaty of Amity and Commerce between the Netherlands and the United States.” The college had an all-campus outdoor celebration service and other events throughout the day, organized in conjunction with the Netherlands-American Bicentennial Commission.

The tree planted by Queen Beatrix can still be seen in front of DeWit Manor, along with a plaque commemorating the event. The shovel can be found in the Anthony J. Diekema, Ex Officio Activities collection in Heritage Hall.

Notably, this is not the only shovel in our collection. A similar one was used by the House Representative and former Calvin political science professor Paul Henry in a groundbreaking ceremony for a local veteran’s facility just a few years after Queen Beatrix’s visit. It now resides in the archive’s Paul Henry collection.

One item that we recently came across in the archives is the short-lived and relatively unpopular mascot: “Cal.” Although Calvin teams have been the “Knights” since the 1920s, (reportedly due to a mistake by a Grand Rapids Press reporter mistaking “Calvin-ite” for “Calvin Knight”), the university did not have a formal mascot until the early 2000s. In fact, Cal was Calvin’s very first costumed mascot–despite being only about 20 years old today.

According to Lynn Rosendale, in a Calvin news story, Cal was “not strong in appearance (more like a cartoon character). He did not win the hearts of students nor the loyalty of fans.” With an odd, vaguely Mediterranean complexion, vivid blue eyes, a Medici nose, and a distinctly un-knight-like costume, the mascot looks much more like a Roman gladiator than a classic high-medieval knight. Cal was retired in 2006, and replaced in 2009 with our new, well-loved mascot: Joust.

Last on my list, found in the “Related Organizations” section of the college archives, is a pamphlet containing the constitution and bylaws for the “Calvinistic Propaganda Club.” Accepted and approved January 7, 1915, the club’s stated objective was “the inculcation of the principle of the Sovereignty of God, as revealed in God’s word and as applying to every sphere of life.”

The club was designed to employ representatives, each paid $200 ($5500 in 2022), to “distribute its literature, to deliver lectures in various places, to solicit new members, and in general to arouse interest and create activity for the cause for which the club stands.” Among its notable members at that time were William Eerdmans, who had founded his publishing company only four years earlier, and seminary professors Clarence Bouma and Samuel Volbeda.

In my time working in Heritage Hall, my supervisors have been gracious enough not to “muzzle the ox,” and have let me do a little bit of reading and research as I go along. I’ve had the great opportunity to investigate the archives with a much wider net than most researchers—and I’ve shared just a few of the odd and interesting fruits of that process.

Peter Mouw is a student at Calvin University.

The cover image of this post is “Joe Student Assistant Archivist,” AKA Peter Mouw, at work at his desk in the “back-of-the-house” in Heritage Hall.