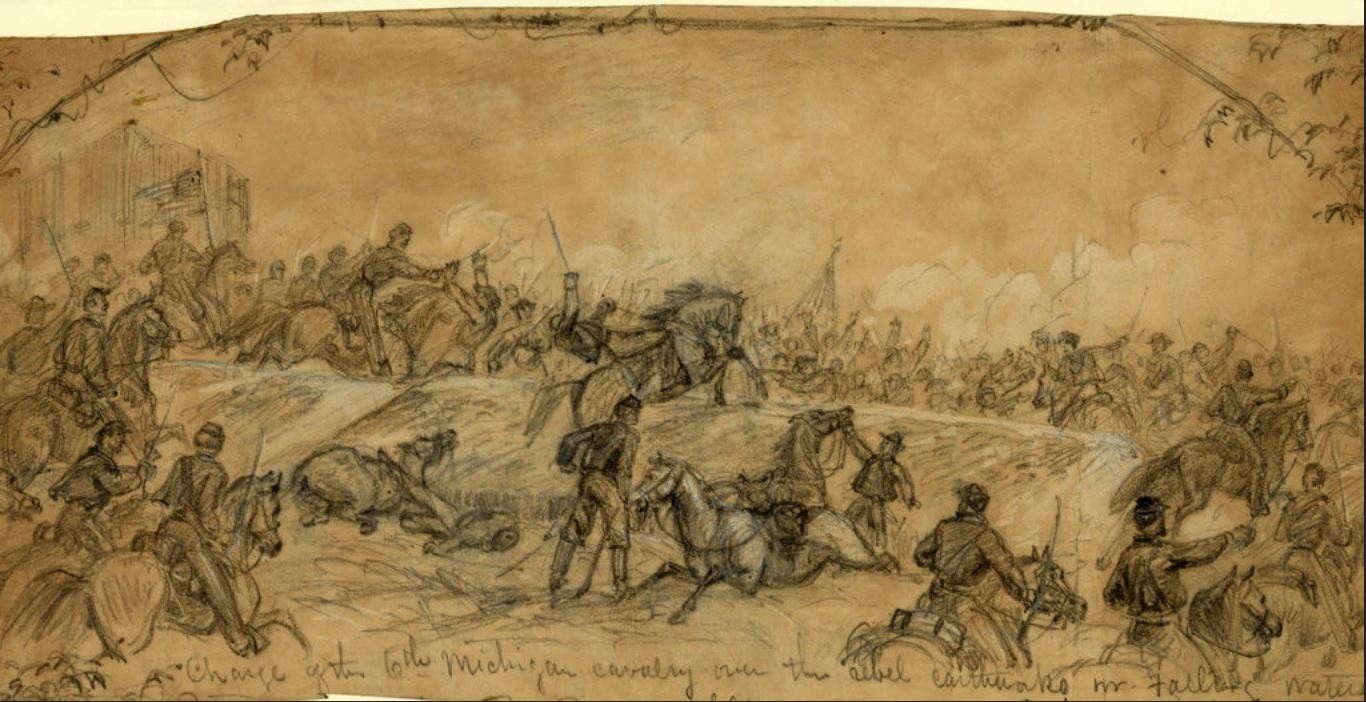 In 1862, the founder of the Dutch colonies in West Michigan, Albertus Van Raalte, began to urge the men of his immigrant flock to enlist. He did not spare his own sons, Dirk and Benjamin. Both joined the Union Army in August, serving with other young men from Holland, Michigan.

Dirk lost an arm at the Battle of Atlanta during the summer of 1864. He was riding through woods, carrying a message, and Confederate soldiers shot him in the arm and shoulder. Surgeons amputated the arm soon after. Dirk himself sent a letter to his parents to tell them in August, with help from his brother Ben. Albertus hurried to go see Dirk, but Union soldiers in Nashville turned him back.

Dirk went on to serve as a hospital steward and was discharged from the army in 1865. He married Kate Ledeboer, the sister of Willie Ledeboer, a fellow Dutch American from Holland in his regiment. Dirk became a businessman in Holland after the war (banking, lumber) and served three terms in the Michigan state legislature. Ben operated a farm.

Immigrants have always participated in America’s wars. And those wars have played a role in Americanizing immigrants. Surging nationalism and suspicion of Germans pushed Dutch Reformed congregations to move toward English language services in World War I, for example. Young Dutch American veterans brought a new confidence as Americans to Calvin College and Seminary and the Christian Reformed Church after World War II.

Party politics and the politics of immigration shaped how native-born and immigrant Americans viewed enlisting in the Union forces. Immigrant groups in West Michigan included the Irish, Germans, Dutch, English, and Canadians. They were a mix of Catholics and various sorts of Protestants.

Into the mid-1850s in West Michigan, Irish and German Catholics, German Lutherans, and Dutch Calvinists all tended to support the Democratic Party. This was true among the Dutch in Iowa, as well. The Republican Party generally was hostile to European immigrants, especially Catholics, while the Democratic Party in the North depended on them. Small numbers of Southerners also had migrated to the region; they were Democrats and did not enlist in the Union forces.

Dutch Reformed folk tended to view the Republican Party as “aristocratic,” like the government in the Netherlands that they had fled. They found the small government ideals of the Democratic Party in the 1840s and 1850s appealing, as opposed to the social and political activism of the Whigs and Republicans. Native-born American Protestants, whether mainline or evangelical, generally supported the Republican Party, as did English and Canadian immigrants.

Early in the Civil War, enlistment by supporters of the Republic Party generally was higher than those of immigrants who identified as Democrats. Irish Catholics were an exception, however, enlisting at a high rate. Germans, whether Catholic or Lutheran, enlisted at lower rates, as did Dutch Reformed men.

Time in America mattered, however. The Dutch Reformed colonies in Holland were a little older and more established than those in Grand Rapids. Men from them enlisted at slightly higher rates than the more recent Dutch immigrant community in Grand Rapids.

In this context, the efforts of Albertus Van Raalte were significant. He had supported the Democratic Party in the 1840s and 1850s. But the issue of slavery and then the war changed things for him. The same was for Hendrik Scholte, leader of the Dutch immigrants in Iowa. Van Raalte switched his support to the Republican in 1859, as did Scholte, and during the war Van Raalte urged fellow Dutch immigrants to show support for their new home by enlisting. Enlistments in West Michigan went up.

In 1862 and 1863, as ending slavery became a part of Northern war aims, Dutch American support for the war effort rose. Support for the Republican Party rose too, but more slowly. In 1864, for exmaple, the majority in Holland still supported the Democratic Party. But by 1868, the majority voted for Ulysses S. Grant, the Civil War general and Republican candidate. This shift was less the case for German Lutherans in West Michigan.

Wartime patterns continued to structure politics in West Michigan into the late-nineteenth century, as in the larger nation. Dutch American became firm supporters of the Republican Party, while other immigrant groups generally continued to support the Democratic Party.

The cover image depicts the charge of the 6th Michigan cavalry over the Confederate earthworks in July 1863, Falling Waters, West Virginia, during the Gettsyburg campaign. Courtesy of the Library of Congress.

This post draws on material from “Dutch Grand Rapids and the American Civil War” by Peter Bratt. For more details about immigrants and native-born Americans from Grand Rapids during the war, check out Issue 22:1 of Origins: Historical Magazine of the Archives (Spring 2004). Also check out an essay by Robert Swierenga, “Getting Political in Holland,” another source for this post. Heritage Hall has many of the papers of Albertus and Dirk Van Raalte.