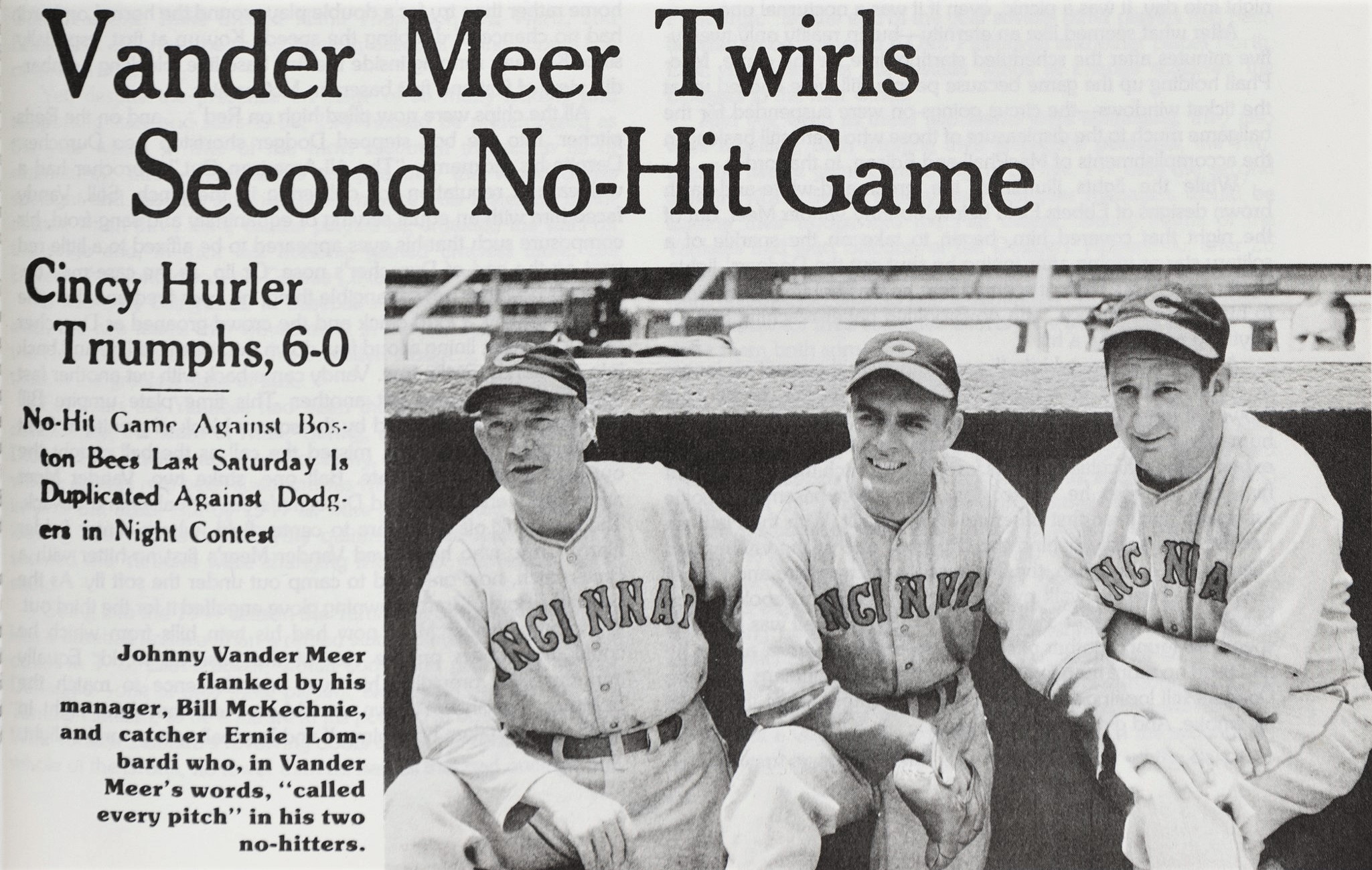 My title — “Play ball?” — really should have two question marks. I picked this topic because I’ve been watching to see whether North Americans will get major league baseball this Covid-19 summer. That’s one question. The other is whether Christian athletes should play on the Sabbath.

I’m not going to answer either question in this blog post. Instead, I’ll look back at the life of Johnny Vander Meer, a Dutch Reformed kid from Prospect Park and Midland Park, NJ, who pitched in the big leagues from the late 1930s to the early 1950s. He also managed several minor league teams in the 1950s and early 1960s, before working for the Schlitz Brewing Company in public relations from the early 1960s to the early 1980s.

I’m not a “true believer” when it comes to baseball. I grew up in Canada watching the Expos and Blue Jays. But I was more a hockey fan (Montreal Canadiens) and basketball fan (LA Lakers), and I played basketball and soccer. What love I had for baseball died in the strike-shortened season of 1994 and the Montreal Expos subsequently moving to Washington, DC, to become the Nationals.

But I remember well the mix of pride and consternation in Dutch Reformed immigrant circles in Canada when some of “our” boys made it to the National Hockey League—notably Pat Verbeek, Jeff Beukeboom, and Joe Nieuwendyk in the 1980s. They made it! But they shouldn’t play “op zondag” (on Sundays).

I grew up in a “liberal” family when it came to this issue. My sisters and I were not allowed to play organized sports on the Sabbath, but we could play “pick up” games, and (somehow) we could watch sports on TV. Many Dutch Reformed kids were not so lucky. They were not allowed to do much more than read theology op zondag. My father, a pastor, and I watched pro sports before and after the 2:30 PM service most Sundays. (I hope I’m not “outing” him here!)

But back to Johnny Vander Meer, “the Dutch Master,” a four-time All-Star pitcher with a blazing, often wild fastball.

Vander Meer inspired the kind of pride and consternation that I experienced growing up. He is most famous for pitching consecutive no-hitters for the Cincinnati Reds in June 1938, during his first full season in the major leagues. Johnny’s first no-hitter was against the Boston Bees. His second no-hitter, four days later, spoiled the celebration of the Brooklyn Dodgers’ first night game under the lights at Ebbets Field.

Johnny was born in 1914. His parents, Jacob and Katie, were blue-collar folk, like most in immigrant communities. Jacob worked for the United Pierce Dye Works his whole career, rising to maintenance foreman. Johnny’s brother Martin also was a good athlete, a catcher who played minor league ball.

Baseball became an issue in the Vander Meer family when Johnny was in high school. His father wanted him to go to a Christian school. Johnny thought that a public school would help his career. Unable to find a compromise, Johnny quit school. He went to work in the dye factor and later as an engraver, and he pitched for semi-pro teams in the area.

Johnny’s big break came in 1933 in an unusual way, when a producer, Joseph Walsh, cast him in a documentary film called Typical American Boy. Walsh partnered with the Brooklyn Dodgers, who signed Vander Meer.

After finishing the film, Johnny went to a Dodgers “farm team” in Dayton, Ohio. He was traded first to the Boston Bees and then to the Cincinnati Reds, playing in their minor league organizations, before making to the major leagues with the Reds.

Jeffer was an organist in the Midland Park congregation. A buddy of his, an usher, sometimes would keep track of Johnny’s games during services, with a car radio, and send notes to Jeffers at the organ about the score.

Despite the criticism of him, Vander Meer was gracious not just to fans in general, but to his local community. He went home and visited family and friends in Midland Park during the offseason, and he pitched in exhibition games for local charities.

Vander Meer was an All-Star four times, but 1938, his rookie season, was probably his best. Injuries and World War II interrupted his career. And long road trips with hot, dusty buses and cheap motels, kept him apart from his wife Lois and their daughters, first as a player, then a manager. Like many in pro sports in the 1940s and 1950s, the low pay meant that Johnny picked up side jobs, first as a player and then a manager. That’s how he first started with Schlitz in the 1950s.

Johnny Vander Meer’s story is a familiar one for immigrants and religious athletes. Success in pro sports – from baseball and football to hockey and boxing – was part of assimilating to life in the United States and Canada and to immigrant groups becoming accepted as part of their new nations. Likewise, religious traditions have long shown mixed feelings about sports, whether amateur, collegiate, or professional.

Jewish athletes, like Christian ones, have wrestled with whether to play on the Sabbath and other holy days. The Detroit Tigers slugger Hank Greenberg got permission from his rabbi to play on Rosh Hashanah in September 1934, deciding it was appropriate on a day of joy. A few days later, however, Greenberg sat out on Yom Kippur, the Day of Atonement. In 1935, however, Yom Kippur came during the World Series, making the choice more difficult. Greenberg decided to play, but he was scratched at the last minute because his broken wrist was too painful. The Tigers won the game without him and won the series.

Three decades later, the Dodgers’ great Sandy Koufax sat out game 1 of the World Series in 1965 because it fell on Yom Kippur. The Dodgers lost the game, and the next two, but came back to win the series, with Koufax pitching two shutouts.

Muslim athletes have had to decide whether to fast from food and water during Ramadan. In February 1995 Hakeem “The Dream” Olajuwon, a center for the Houston Rockets played through fasting and was Player of the Month in the NBA.

Religious colleges and universities have used sports as a way to raise their profiles and promote the faith, from Notre Dame to Liberty University.

And religious communities of many stripes, whatever their views of conflict between sports and religious holy days, have made sports like softball part of community events such as picnics, and they often have organized “church league” baseball, hockey, and soccer.

A sign of change for the Christian Reformed Church can be seen in the hockey career of the Staal brother, whose Dutch grandparents immigrated to Canada after World War II. Eric Staal and his three brothers, all of whom played in the NHL, grew up in First Christian Reformed Church in Thunder Bay, Ontario. When Eric’s team, the Carolina Hurricanes, won the NHL championship in 2006, he got to take the Stanley Cup home to Thunder Bay and First CRC. And he got a writeup in The Banner, where the story was about a hockey family and the way that faith grounds its famous sons.

“‘When I come home,’ [Eric] said, ‘it feels like I’ve barely been gone. Coming back [to First CRC] and enjoying the service and the fellowship, it’s great. My faith is a major thing in my life. It helps me stay focused on what’s really important: God and my family. My church is a big part of that.'”

This post draws on material from “Johnny Vander Meer: The Dutch Master,” by Calvin Cevaal. For more details about the life and career of Vander Meer, check out Issue 25:2 of Origins: Historical Magazine of the Archives (Fall 2007).