A Great Grandfather’s Memories of Immigrating 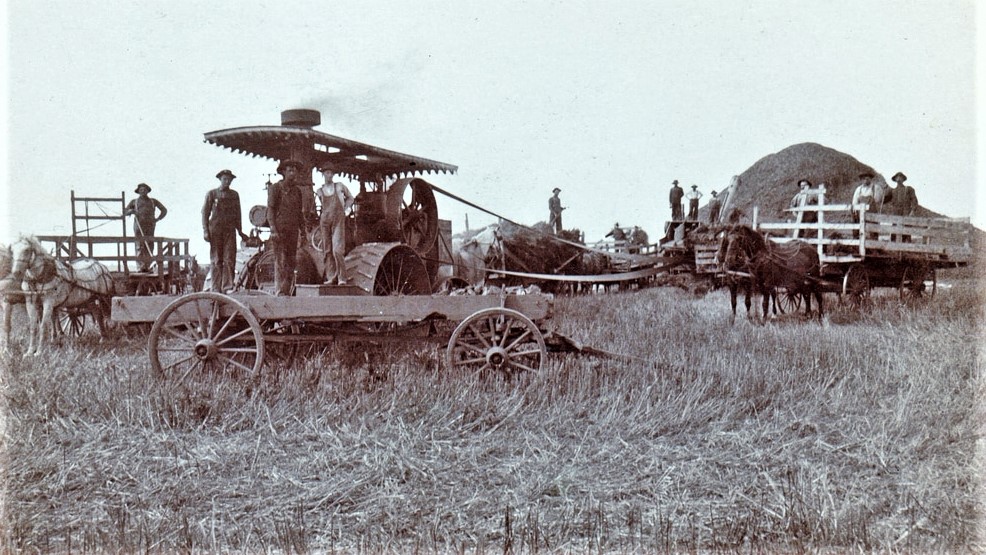 This week’s blog post is based on a paper by Dan Poortenga, who graduated from Calvin College in 1992. In a history course on the Netherlands with Herb Brinks, then curator of Heritage Hall, Dan wrote an essay about his great grandfather, Peter Oudshoorn, who immigrated to the United States in 1904.

For the paper, Dan interviewed his Grandpa Oudshoorn, who was 102 or 103 at the time. A lot of people in his family knew the basic facts of his great grandfather’s life, Dan told me, but no one had written down his story.

Peter Oudshoorn was one of over 380,000 Dutch immigrants to the U.S. between 1820 and 1920. He was unusual for arriving alone, with no friends or family on the journey with him or waiting for him in the U.S. Arriving alone was a common experience among some immigrant groups, but not the Dutch. Most came in groups—only 10 percent as lone individuals.

“The part of the story I like best,” Dan told me, “is when my grandpa, at age 16, by himself in a country whose language he did not speak, has a distant smoke plume pointed out to him.  That’s a thresher, he is told.  Follow that and you’ll find work.  It shows a lot of courage, it seems to me, and also faith – reminiscent, in a way, of the faith of the Israelites.”

Oudshoorn’s journey to the United States was complicated, as this post and a subsequent one will show. His family lived in Capelle aan den Ijssel, near Rotterdam, when he left in 1904.

Oudshoorn arrived in New York only sixteen years old, with a letter from the U.S. government directing him to Minneapolis. He hoped to find better work and opportunity in the U.S. than he could in the Netherlands. A mistake by the ticket agent at the train station sent him to Montreal, in Canada, not Minneapolis.

We pick up Peter Oudshoorn’s story when he finally arrived in Minnesota, as he remembered it, and told by his great grandson Dan Poortenga.

The train rolled into the station in Minneapolis as the sun was disappearing from the horizon. The conductor, who watched as passengers exited the cars, observed Peter’s hesitation and correctly deduced that he did not know what to do. When the conductor asked him where he wanted to go, Peter responded with the memorized words, “to a farmer.” The conductor kindly sent word to a nearby farmer who agreed to take Peter into his employ and showed up at the station with a horse and wagon a few hours later at 9:00 pm. The autumn evening was chilly, and Peter huddled beneath a blanket as the wagon creaked off into the darkness. He exchanged a few words with the tired farmer, a rather young man, recently married but without children. Since it was harvest time, the man had more work than he could handle and was happy to obtain help.

The work was difficult but rewarding. Peter had grown up on a farm, but was unfamiliar with some of the methods and techniques commonly used in America. For example, he had never worked with horses, so the farmer patiently showed him the ropes.

The couple treated him with kindness and respect, for which he was grateful. They took an interest in him and his life, which helped to mitigate the feelings of loneliness and homesickness from which he was suffering. However, when this man’s harvest was completed, so was Peter’s job. The farmer pointed out a plume of smoke in the distance that came from a thresher traveling from farm to farm to assist with harvests. Peter was advised to follow the smoke and to seek work with the thresher.

The threshing crew needed help and Peter spent the next several weeks working on various farms. Some of his co-workers resented his productive work habits. He had been taught in Holland not to steal time by loafing and his industriousness made the other fellows look lazy. They did not appreciate it. One man even warned him that he could get hurt if he kept it up, but nothing came of it.

In the Netherlands, it was common for someone of Peter’s social class to use only fingers and spoons while eating. In America, he was introduced to forks and knives, and he learned how to use these new utensils by glancing unobtrusively at others around him as he ate. It was customary for farmers’ wives to prepare dinners for the large threshing crews, and this resulted in an unexpected bonus for Peter, since the women competed with one another in preparing large and tasty meals.

Because he knew little English, Peter often was lonely and took great pleasure when he came into contact with other people from the Netherlands. One Dutchman, a young fellow who also worked for the threshing crew, had heard about work available in New Jersey. When the harvest was completed, they set out together for the East coast.

Once in Newark the boys split up in order to find work. Peter found employment with a farmer who had seventeen cows. These cows had to be milked both in the morning and at night. This was a task that took many hours to complete and caused Peter’s hands and back to ache constantly.

Because there were Dutch people who lived in Newark, Peter was able to obtain a newspaper printed in Dutch, which in all likelihood had been published in nearby Paterson, a predominantly Dutch town. In it he saw an advertisement for free land in the Holland colony in North Carolina. Not only was the land free, but the advertisement also touted the possibility of two crops a year.

Peter left for North Carolina only to discover, much to his dismay, that although the land indeed was free, it was heavily wooded. Other Dutchmen would help clear it, but it was extremely hard work. The trees had to be felled and hauled away and the stumps chopped, dug, and then pulled out by oxen. His interest faded as he realized how much work was required before he could begin farming.

Although he was not opposed to hard work, he did not have the extra incentive possessed by other settlers who lived with family and friends. They were willing to go to great lengths to make a home for themselves. He was in North Carolina for only a few weeks when he met a boy who had heard about wealthy people for whom they could work in Battle Creek, Michigan. This sounded better than chopping out stumps, so he agreed to accompany the boy to Battle Creek.

Peter had saved almost $300 since coming to America and had deposited it in a bank in Newark. He was unable to withdraw the money before departing for Battle Creek, so he made arrangements for it to be wired ahead. With just enough cash in hand for the trip, he and his friend boarded the train for Michigan. At one of the stations, Peter left the train to stretch his legs and he wandered away from his friend to look at pictures hanging on a wall inside the station.

As he was looking at these pictures, a man approached and engaged him in a conversation. When the man suggested they take a walk, Peter became a little uncomfortable. However, being young and naïve, he followed the man to the back of a building near the station. There they met another man who was seated at a small table.

The two men tried to engage Peter in a game of cards, an offer that the young Dutchman declined. It soon became apparent that the two men were only trying to determine whether Peter had any money. One of them produced a gun, and Peter hastily gave them all the money he had, which amounted to three dollars. The men took it and quickly departed, leaving Peter angry and [feeling] foolish.

Since the incident occurred on Saturday, he was unable to obtain anymore money. The train did not reach Battle Creek until Sunday night, and his chagrin at being taken advantage of was matched only by his hunger. His friend had only a few dollars himself, but shared it with Peter upon their arrival in Battle Creek., and the two boys ate until they felt sick.

Later that day as they were wandering around town a Dutchman whom they had passed earlier on the street came up to speak to them. The boys explained their intent to him and asked him if he knew of any available work. Although he could not help them find a job, he indicated that his mother would be willing to feed them until they found work.

This woman proved good on her son’s offer and fed both Peter and his friend three meals a day for three dollars a week. Initially the two boys shared a room in town, but they soon separated when they obtained employment.

An ice company that cut and stored ice during the winter and sold it in the summer hired Peter. He delivered ice to customers all summer and impressed the boss with his hard work. When autumn arrived, he was retained and given the job of delivering coal.

It was now 1906 and Peter had been in America for two years. The $160 he had borrowed to pay his passage on the steamship from the Netherlands had already been repaid.

Initially, he had borrowed this money from his sister, who had received $200 from the [Dutch] government when she turned eighteen. Their mother had died when Peter was three, and he and his eleven siblings were each entitled to receive $200 on their eighteenth birthdays as part of a government program designed to assist those who had been disadvantaged in this way.

When Peter came to America in 1904 he was only sixteen, and the Dutch government had not allowed him to take his $200 early. In order to get the money together for his passage, Peter and his older sister had hired a lawyer to draft a contract whereby he received her money and she was to collect his money two years later. However, he was able to make enough money in America to repay her during his first year here.

In 1906 Peter Oudshoorn decided to return to the Netherlands. The country had a draft and at age eighteen young men drew lots to see if they were required to serve in the army. Though overseas, Peter felt obligated to his homeland and had his father draw his draft number for him. Unfortunately, he drew a low number and was drafted. Even though he had been getting letters from girl in the Netherlands, a classmate from school, he was heartbroken to leave the United States as he got on a German steamship to return “home.”

Peter would spend the next several years in the Netherlands, marrying, working a variety of jobs, and having a child. He would return to Battle Creek, however, in 1912, again alone. Eventually, he would bring his wife and child to the U.S., start a series of businesses, and sponsor his sister and her family as immigrants to the United States.

Next week, we will continue Dan Poortenga’s story about his grandfather.

Dan Poortenga graduated from Calvin College in 1992. This story was introduced and very lighted edited by William Katerberg, Curator of Heritage Hall.