A Land of Good Success and Personal Happiness? 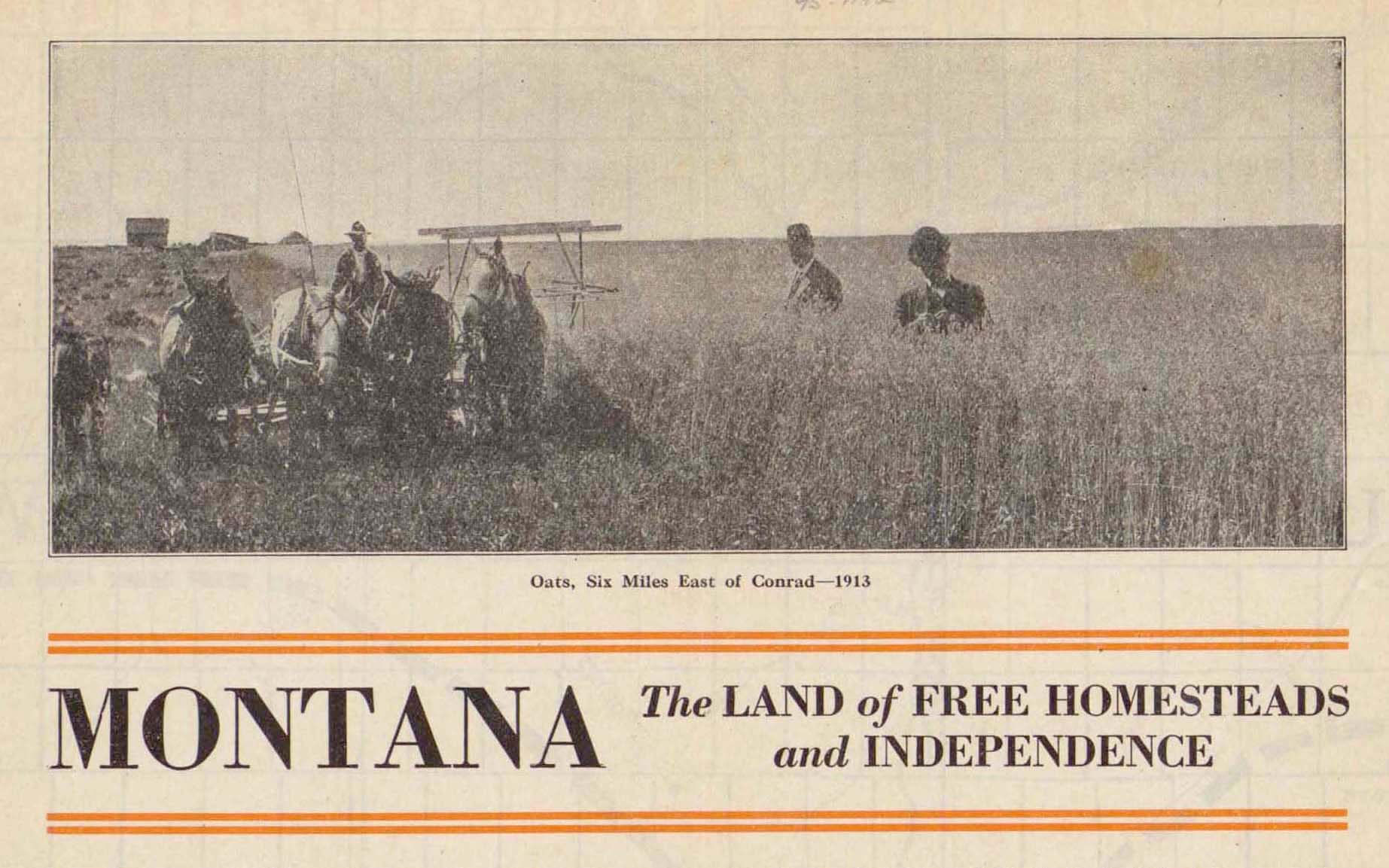 The mythology of the frontier West is that it was a place to escape to and start over. Nicholas Zandstra’s story seems to fit that mythology. Columbus, Montana, gave him his chance.

In 1916, he wanted to escape work in Chicago factories. His one true love had rejected him. He feared that the U.S. was going to enter the Great War, and he did not want to get drafted.

Nick’s father, B.H. Zandstra, had failed as a homesteader in Colorado. And his wife did not want the family to start over in Montana.  When a booster selling land in Montana came calling in Highland, Indiana, just south of Chicago, B.H. and Nick started planning. Maybe Nick could go instead.

The idea was for Nick to start a farm in Columbus, Montana. The profits from the farm would support the Zandstra family. B.H. invested in the venture to help his son make those profits and to test whether Montana might be a future home for the whole family.

Nick did not waste time when he arrived in Columbus. He boarded with neighbors and friends, rather than build a house. He used his tractor to cut through the prairie grasses and break the virgin soil. He also would use it to transport his crops to the nearest gain elevator.

It was not “busy” in Montana like Chicago, Nick told his family; but “It sure takes ambition here.” The tractor was essential. “I could hardly farm without a tractor . . . I have to disc and seed about 130 acres, so I’ll be busy, and then I hope to plow some 50 acres.”

Frontier mythology and cowboy movies set in the West make us think of isolated families. But Nick had a community in Columbus. His go getter attitude impressed the local Christian Reformed Church leaders, and they made him president of the Young People’s Society.

Nick missed him family, nonetheless. Crop failure made it worse, leaving him to feel despair and disappointment. Hail destroyed his first crop. “I was sure discouraged that Sunday night when everything was taken away in about fifteen or twenty minutes,” he wrote. “How happy I was [to think] that I could have helped my folks out with [our] large family, and now it’s all gone.”

A church community and Nick’s own faith helped him. “I had a hard week,” he explained, but the next “Sunday morning [with] the sweet words of comfort for the afflicted [from the sermon of a visiting minister], I could go forth with great joy.”

Nick stuck with it. His family was counting on him, and he was determined. But in September 1918, he wrote that he was sick with sweats and chills. It was influenza, and Nick was a victim of the pandemic of 1918-1919, one of a half million Americans who died. The family had Nick’s body shipped home, unable to bear the thought of leaving him in Montana.

Whatever the mythology, the reality of homesteading was one of failure as much as success or conquest. Hailstorms. Grasshoppers. Drought. Bitterly cold winters that killed cattle. In good years, glutted global markets for wheat might leave a farmer losing money on every bushel he sold. He was competing with farmers on similar frontiers in Canada, Argentina, and Russia. Grain elevators sometimes ripped off farmers. The railroads gouged them to ship their crops. And stores and banks always came calling, demanding that loans be paid.

In boom years, however, a farm family could make good money—paying off loans, splurging on household goods, and investing in more equipment or land.

Many farmers failed time and again. Sometimes they doubted. One in Columbus said,” I don’t believe there is a merciful Lord.” But farmers also persisted. Perhaps rather than failure or conquest, their story is about the endurance of individuals, families, and communities. A farm might fail. But many frontier families moved on and tried again.

Why did they keep trying?

The promise of profits and the winsome songs of boosters beguiled some of them. Advertisements in De Wachter, the Dutch language magazine of the Christian Reformed Church, promised:  “Now is the time to buy your ticket and travel to COLUMBUS, MONTANA, land of good success and personal happiness. Here is the opportunity to gain possession of your own farm. Don’t listen to those who are afraid of this. He who thinks good fortune does not accompany him never gets ahead.” Another ad said: “Land for twenty to thirty dollars per acre. No irrigation, no trees or stumps.”

Dutch Reformed salesmen visited immigrant enclaves in the Midwest and used “magic lantern” slide shows to promote promised lands of milk and honey in the West.

But more than falling for slick sales pitches, perhaps, frontier farmers chose to live the life that called out to them and did it on their own terms as best they could.

We can see these kinds of stories in the Dutch Reformed immigrant families that migrated to places like Columbus, Montana.

Life in Columbus demanded hard work from all members of the family. But it was not without its blessings.

Women carried wood and water, kept animals and a garden, churned butter, baked bread, canned vegetables and fruit, and mended clothes. Young children helped their moms. As they got older, boys began working with their fathers on the farm or worked on ranches, in mines, or cutting timber to bring home money. Fuel was scarce. Settlers burned “cow chips,” wood (aspen, which grew in valleys), and lignite coal, sometimes found in nearby hills, sometimes bought in town.

Families lived in sod houses, tar paper shacks, or tiny frame houses (for those with more money). They might look poor. And in material terms, they often were. But we also should see pride in the pictures they had made of their homes and farms and see hope for prosperity. Someday they might buy the fancy clothes and consumer goods that they saw in the Sears catalogs that circulated in the West. Some families indeed could afford books, a hand-cranked phonograph, records, and some nice furniture.

Like many frontier churches, Columbus CRC did not have its own pastor. It chose lay leaders to read sermons and sometimes it could afford to pay a seminary student preacher for the summer. When visiting pastors came and led a service, they could celebrate communion and baptisms.

In the 1920s, church council records from the Columbus congregation reveal a community in distress. The congregation was short on cash. It advised the classis (a regional church body) to warn against the advertisements of land agents in church magazines. “[The] truth is not revealed to our estimation,” the Columbus church said about land agents and their advertisements, “for in the past it has been learned it can be disappointing.”

The Columbus community and church had always struggled some. The Great Depression brought an end. To pay off its debts, the church dismantled and sold its building. A CRC congregation in Sumas, Washington, bought the the pulpit, benches, and carpets. (Some families from Columbus had moved on to Sumas.) The last remaining families left Columbus in 1939.

Little evidence of the Holland Settlement is left today. The roads are abandoned. In some places you can find flat rocks that were foundations for buildings. Cattle forage on land that once was the church cemetery. Some of the settlers went back to the Midwest. A few families moved on to start over in Gallatin Valley, Montana, and others migrated to California or Washington.

What would the flat stones of the Columbus CRC building tell you if you could find them? Are they signs of failure? Mythologies of conquest would suggest so.

Whatever else it was, a frontier community like Columbus did not offer an escape from the travails of the wider world. It was another place where the joys and sorrows of life played out. We probably remember it best, and see it mostly truly, when we shed simple judgments like success and failure and instead remember the joys and sorrows both.

This post draws on material from “Paradise Lost: Columbus, Montana,” by David Zandstra. For more details and the larger story of Columbus, check out Issue 11:1 of Origins: Historical Magazine of the Archives (Spring 1993).