Suffrage and the Christian Reformed Church – I 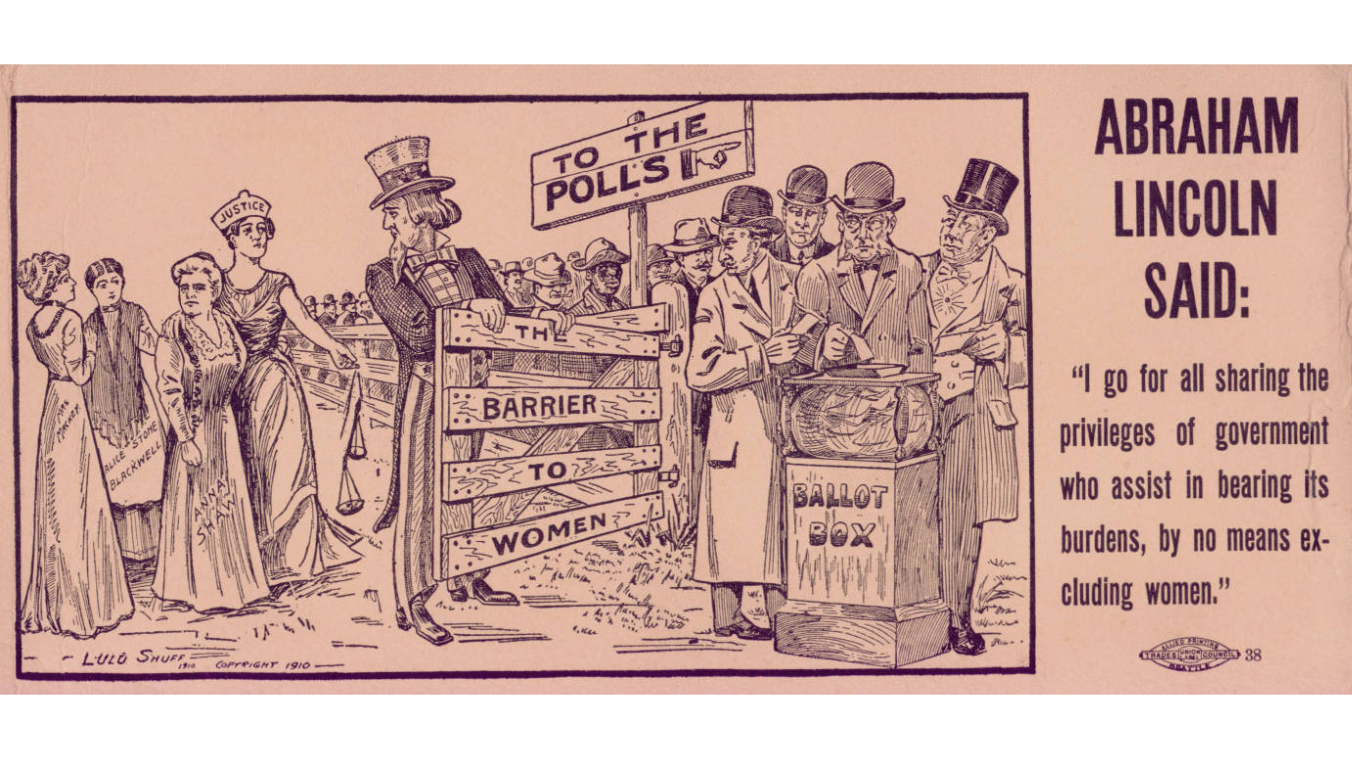 The larger revolution was about equality for women. It is an ongoing one and not just in political life. This blog post will focus on views of the 19th Amendment in the Christian Reformed Church. Next week’s blog post will examine debates about women’s suffrage in the church, in the decades that followed.

Much like majority public sentiment in the nation in the early 1910s, the general sentiment in the Christian Reformed Church (CRC) was opposition to women’s suffrage. In 1912 and 1913, for example, Jacob Vanden Bosch wrote in criticism of women’s suffrage in the denomination’s English-language magazine, The Banner. His articles were entitled “The Equal Suffrage Question” (October 31, 1912) and “Woman Suffrage Again!” (April 13, 1913) .

Vanden Bosch expressed a common perspective by stating that women’s suffrage would upend traditions in society, politics, and the church. He argued that suffrage was opposed to the Bible, which taught that men (fathers and husbands, normally) represent women and properly rule in the family, the church, and society. Society consists of families, not individuals, in this view, and so votes by men represented not just men as individuals but the women and children in their families.

A few Christian Reformed leaders, such as Reverend Johannes Groen of Grand Rapids, defended and promoted women’s suffrage. In a lecture given at Eastern Avenue CRC, his own congregation, he argued that the “present subordinate position of women is not due to any inferiority inherent from creation, but is one of the results of the curse pronounced upon mankind as a result of sin.”

Women’s inequality in American society thus was not an ideal or condition of nature, Groen explained, but a consequence of sin. “You can’t get away from it. In a democracy woman, as a part of those governed, has a right to a voice in the government.” Without the vote a woman was reduced to a “plaything,” he argued. Groen assumed that men and women had different roles in life, but he insisted that women had a right “to assist in regulating” the things that affected their sphere.

Groen was criticized by influential leaders in the CRC. A major question in the church was whether women’s suffrage was a “confessional” issue, a matter related to basic orthodoxy and fidelity to scripture. If it was, then supporters of suffrage like Groen were transgressing Reformed teaching. They might be sanctioned, lose their ordination, and even be excluded from the church if necessary.

In May 1916 The Banner printed a “Report of the Committee on Woman’s Suffrage” (May 4). Later that year, the Synod of the CRC met and affirmed the report’s recommendation to not make suffrage a confessional issue. “Women’s voting right is a purely political matter,” the Synod decided, “and [it] does not belong on the terrain of the church.” Members of the CRC could actively oppose or actively support women’s suffrage.

In August 1920, The Banner published a brief note on the 19th Amendment by Reverend E.J. Tanis, which he assumed would be ratified shortly. (He was right, it would be ratified later than month.] Tanis expected that women in the CRC would not hesitate to use their new right to vote.

“We have talked with a very large number of our women and find that they take an intelligent position of this question,” Tanis said. These women were not put off by claims that suffrage is the devil’s work; they saw much good in the suffrage movement. They knew that “nothing can be gathered from the Scriptures which is a clear and explicit condemnation of woman suffrage.” Tanis also appealed to Herman Bavinck, an influential Reformed theologian and biblical scholar, as authoritative on this point.

Tanis concluded that “woman suffrage is but the consistent, natural, and logical development of the American system of suffrage, according to which the individual citizen, and not the family, is the unit in the state. The American state consists of so many individuals, not so many families.”

Women voting would not “purify the atmosphere” in American politics, Tanis thought. Women too were sinful, not just men. Suffrage was about justice. As for the “salvation” of America, it lay not in women voting, or in the prohibition of alcohol or economic reform, for that matter. It lay in “a return to Puritan principles.” “Not Mary,” Tanis concluded, “but only Mary’s Son, shall save the nation.”

If Tanis was supportive of women’s suffrage in 1920, other CRC leaders remained opposed. In April, in response to the question of whether Christian Reformed women should vote when the state gives them the right to do so, Reverend Herman Hoeksema said no. (Hoeksema was Johannes Groen’s successor at Eastern Avenue CRC.) Not even when an issue dear to Christians was at stake should women vote. It was a matter of principle. “If a thing is wrong in principle, it is wrong always,” he insisted in the Young Calvinist. “We must never look at results to determine whether anything is right or wrong.” No matter what was at stake, Christian Reformed “women should not go to the polls.”

Christian Reformed Church related magazines discussed suffrage on occasion over the next decade. In December 1930, for example,” Jacob De Jager wrote an article in The Federation Messenger on “Ten Years of Woman Suffrage.” The magazine was published by a Reformed men’s society. His goal was to evaluate whether women’s suffrage had been a success.

“Woman suffrage” has been a success according to some observers, De Jager noted. “Women authors” have argued that the 19th Amendment removed the injustice of “American-born women” being “as aliens within their own country.” (Even immigrant men, if they became citizens, could vote.) Women’s presence has cleansed politics and courts, in that these are less “riotous” and “salacious” than they once were. Women have powerful advocates of peace internationally. And they are voting.

De Jager was not convinced by these arguments, however. He did not see evidence that “woman suffrage” had been “a success or a good thing.” Politics was still scandal-ridden and corrupt, he asserted, especially in big cities. Women elected to office mostly had been the widows of men who died in office. They seem to have made their constituents happy, he acknowledged, as some had been reelected more than once. His conclusion was that the time has been too short to judge “the value of so great an experiment as extending the right to vote to women as well as to men.”

Discussions by men from a century ago likely sound patronizing to most twenty-first century ears. This tone is a reminder that “woman suffrage” indeed was a revolution and would be an ongoing one. Women had won equality before the law and in politics nationally, in the formal constitutional sense. But whether (and when) they would experience economic, social, or political equality in real life would require an ongoing revolution, as women’s rights movements and “second wave” feminism would reveal in the second half of the twentieth century and in the early-twenty-first.

Part of this ongoing revolution would take place in the church itself. Next week’s blog post will pick up this story by looking at the debates about women’s suffrage within the church. Should women be granted the right to vote in their churches–e.g., for elders and deacons or in church decisions about calling a new minister? The ongoing revolution in the church was not only a consequence of political change, but also perhaps a consequence of the Reformation itself.