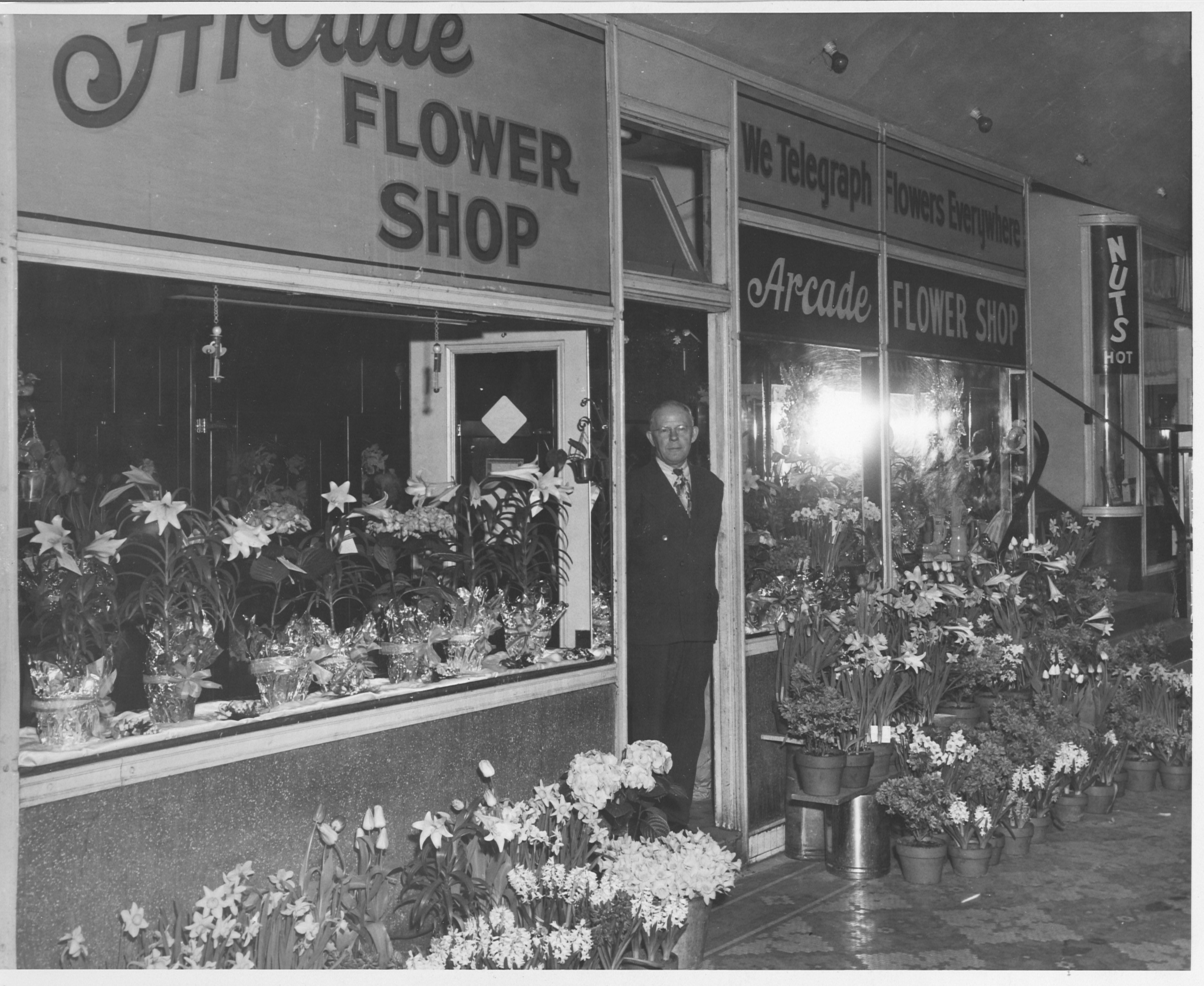 The previous two blog posts started a story told by Dan Poortenga about his great grandfather Peter Oudshoorn. Dan first wrote this story as a paper in a Calvin College history course in the early 1990s. He interviewed his great grandfather and set his story in the larger context of the history of Dutch immigration to the United States.

The first blog post started the story in 1904, when Peter Oudshoorn emigrated from the Netherlands to the U.S. He moved around, working in several states, ending up in Battle Creek, Michigan The second blog post continued the story, following Peter back to the Netherlands in 1906, where he avoided the draft, got married, took over his father’s farm. Peter returned to the United States, alone, in 1912, settling in Battle Creek, Michigan.

Peter brought over his wife and children in 1914 and that same year started running a vegetable and flower farm, owned by a Mr. Post, brother of the founder of the Post cereal company. Peter sold his vegetables in town to a variety of customers and his flowers to a flower shop.

We pick up Peter Oudshoorn’s story in the mid-1910s. Europe was engulfed in the Great War, which we know as World War I. The war largely closed down immigration from Europe to North America. The story is told as Peter remembered it many decades later, and reported by his grandson Dan.

In 1917, Peter and his wife sponsored his sister and her husband, Wilhelm and Kee Vos, and their four children, two of whom were boys and able to work on the farm. Peter paid their passage and then employed Wilhelm and the two boys. Peter allowed the family to live with him and his family in the large farmhouse.

Peter paid Wilhelm the same wage as his other employees, although he was not as productive. Wilhelm did not learn how to use a horse, could not plow, and swore when he made mistakes. Since they shared the same house, Peter was able to hear him through the walls sobbing to his wife because he was unhappy. Eventually, Wilhelm took his family to Kalamazoo, where he was able to obtain other employment.

At this time, Mr. Post decided to sell the farm and wanted Peter to buy it. Although Peter had met with considerable success, he was unable to buy the large farm. Mr. Post told him, “I’ll see to it that you can.” Peter finally purchased the farm, but it turned out to be a mistake. He really could not afford it.

Peter’s largest crop was leaf lettuce, which he sold for 20 cents a pound. The advent of refrigerated railroad cars enabled California farmers to ship head lettuce to Michigan. The head lettuce was so popular that the price of leaf lettuce plummeted. Peter found himself overextended, unable to pay his employees and pay Mr. Post. He had no other recourse but to leave the farm.

His business had gone down the drain, but Peter’s determination continued. He regarded the loss as a learning experience, albeit an unfortunate one, and he emerged from it with the caution and care that characterizes prudent businessmen. He moved off the property with his family and into a house about 15 miles from Battle Creek.

Peter had heard about this house at church. Since it was an estate property, he was able to buy it with only a small down payment. He and his wife had four children at this time—Hillemena, Bert, Henrietta, Johanna, and John. Their youngest daughter, Alberta, was born in this new house. Peter James was born a few years later, but died in infancy.

Peter rented a store in Battle Creek, which previously had housed a bakery. He grew primroses, roses, and other flowers at his home and sold them in the store.

Peter did not have a car and had to walk or hitchhike the fifteen miles into town, carrying a large bundle of flowers. He usually was able to obtain rides from commuters who worked in Battle Creek. A friend had a large storage cooler that he gave to Peter and let him pay for it when he was able.

The cooler enabled Peter to expand his inventory, since the flowers could be preserved longer than if they were left out. He was able to increase his business and repay his friend. Another friend sold him a car very cheaply, which relaxed many of the limitations he had been operating under.

Peter was a lively, energetic man and a hard worker. He enjoyed growing and selling flowers and met many people and made many friends. Like many small businesses, Peter’s was family oriented. His wife and children worked both in the shop selling flowers and at home growing them. Peter found his other employees at church or in the local Dutch immigrant community.

Peter’s oldest son was particularly competent and was able to run the cash register and make deliveries before he was fourteen. He was a rather small boy and sat on pillows behind the counter and in the car to make himself appear taller. Sadly, in his fourteenth year he was struck by a car while riding a bicycle and killed. Tragedy struck again a year later when the Oudshoorn’s three-month old baby died. Although these deaths were agonizing Peter and Hendricka had several healthy children for which they could thank God.

The location of Peter’s store prevented his business from growing and he sought out a new location. On the recommendation of a friend, he approached a dime store owner who had a large display case that was not being used. The two men worked out an agreement whereby Peter could rent the case and keep it filled with flowers. This worked out well until the owner decided to use the case himself. The idea had been a good one, however, and Peter was able to find another store with an empty display window, which he could rent.

One morning, while Peter was placing flowers in the window, Mr. Post happened by and noticed a big bouquet of wildflowers, which Peter had stopped to pick on his way into town. Mr. Post bought the bouquet and asked Peter to deliver it to his office. From that point on, Mr. Post’s secretary frequently ordered flowers from Peter to give to Mr. Post’s customers. Peter’s business grew as it became more popular and soon he relocated to be more centrally located.

Peter found an ideal location on the ground level of the Wolverine Tower building. It was the tallest building in Battle Creek and housed many businesses, including a large bank. Although the store faced the street, it had only one small display window. So, Peter added a larger one and another door. By this time, Peter had built a large greenhouse behind his home and was able to supply his new shop with many fresh flowers. The man in the bank responsible for managing the building told Peter that he had the “nicest flower shop between Detroit and Chicago.”

Tragedy struck the family once again in 1942, when Peter’s wife died from heart complications. The loss was aggravated by World War II and its associated hardships. Peter’s youngest daughter, Alberta, was only 14  years old and he could not leave her home alone. He put an ad in The Banner for a housekeeper. It was answered by a woman who came to his house and, after looking around, said, “I won’t be your housekeeper, but I will marry you.” Peter married her one year later.

In 1948, Peter returned to the Netherlands for a visit. He had just purchased a brand new 1948 Buick Roadmaster, and he brought it along on the ship. It served as a shiny, tangible example of the possibilities that America had to offer industrious immigrants. Such a display of wealth perhaps compromised the pietistic religious tradition in which Peter’s faith was rooted. But Peter had overcome great odds and had weathered the doubts of kinsmen who considered the possibilities for success in America to be overrated. He had difficulty maneuvering the mammoth automobile through the narrow streets in Holland, but its presence undeniably was impressive.

A niece, her husband, and daughter saw the car and, in Peter’s words, “thought that you could get money for nothing in America.” Peter sponsored this family and paid their passage to the United States. The man was a butcher and Peter helped him to set up shop in Galesburg . . ..

Peter finally sold his flower business in 1961 and, at the urging of his wife, reluctantly moved to Grand Rapids. He was 73 years old, but still in excellent health. He soon regretted having retired so young. He helped out at Windmill Floral on Wealthy Street, SE, in Grand Rapids, during busy seasons. He also worked at Kingma’s Market on Kalamazoo Avenue. During the month of May he potted urns for Memorial Day, and during December he made wreaths for Christmas. Peter continued to work for Kingma’s, making wreaths, until he was almost 100 years old.

Peter’s second wife died in 1971. He never remarried. He lived alone in his house on Boston Street, decorating his yard with hundreds of flowers, grown in the greenhouse he had attached to his garage. In 1988, he suffered a stroke while working in his garden. After recovering, he gave in to the pleas of his family and doctors and reluctantly moved to the Holland Home facility on 44th Street in Grand Rapids. In March 1991, he blew out the candles on a cake that could not accommodate the 103 candles it needed to count his age. He died a year later, in early March 1992.

For a local news story about Peter in retirement, see below.

This story was introduced and lighted edited by William Katerberg, Curator of Heritage Hall.