The Strange Story of the Professor and the Dutch Chair 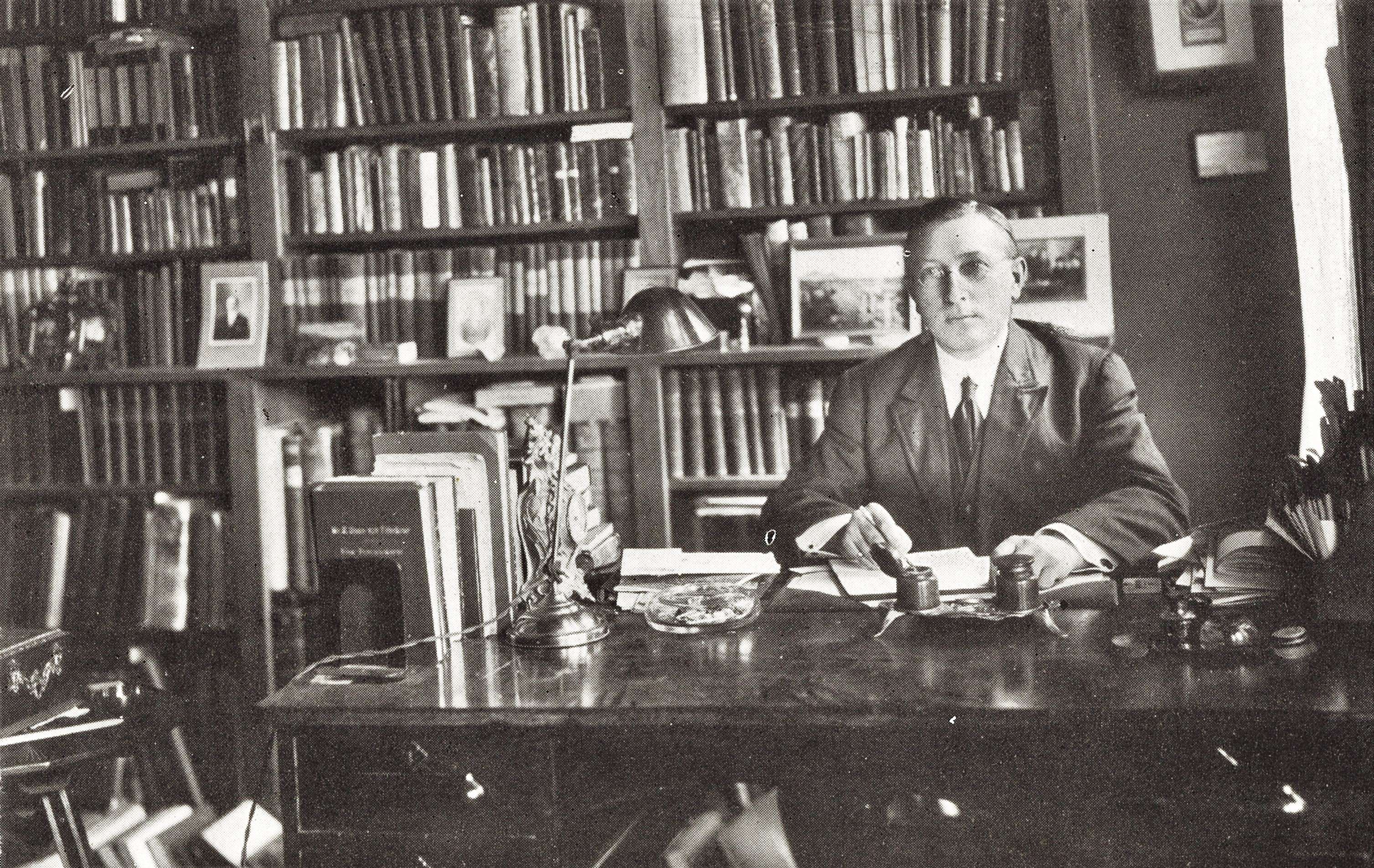 During the early spring of 1911, leading Dutch Reformed folk in Chicago and Michigan were fighting about a professor. The issue was not, as you might think, unorthodox theology or dangerous ideas. It was who should be the new professor of Dutch history, language, and culture at the University of Chicago.

The debate and the position at Chicago are not of great significance, in and of themselves. The job lasted only two years. It was based on “soft” money (fundraising by the Dutch Reformed community). The University chose not to continue it. And the professor faded into historical obscurity.

But the story offers a window into the Dutch American community in the Midwest in the early 1900s and ongoing relations between Dutch Reformed folk in the U.S. and the Netherlands.

Dutch American pride is the place to start.

In the 1890s, the Dutch American community in Chicago was well off enough to start social clubs and promote ethnic pride. Examples include the Holland Society and the General Dutch League (Algemeen Nederlandisch Verbond). These clubs were modeled on older ones in New York or were part of international organizations of the Dutch in the old world and global diaspora. Other ethnic groups had the same kind of clubs.

The Columbian Exposition was held in Chicago in 1893. This world fair, named for the 400th anniversary of Columbus’s discovery of the Americas, brought visitors from around the world to the city. It celebrated modern civilization, the coming of age of the United States, and the accomplishments of the countries that had exhibits.

The Exposition inspired Dutch Americans to organize social clubs and sponsor lectures and publications. The goal was to promote Dutch influence in the U.S. and around the world. They were proud Hollanders and proud Americans.

The General Dutch League, especially, promoted education. It was founded in 1895 in Brussels, Belgium, inspired by an article in a Chicago newspaper, De Nederlander. Current events spurred a meeting in 1899 at Hope College in Holland, Michigan. They included the coronation of Queen Wilhemina in 1898; a visit by the Dutch theologian (later prime minister, in 1901-1905) Abraham Kuyper, in 1898-1899; and support of the Dutch settler cause in the Boer War. Soon there were clubs in Holland, Zeeland, Grand Rapids, Muskegon, Chicago, Minneapolis, and other Dutch American enclaves.

The League sponsored lectures on the influence of the Dutch on America. In 1907, it started raising money to fund a chair in Dutch history and culture at the University of Chicago. Columbia University in New York already had such a chair, funded by the Dutch government. The chair in Chicago was endorsed by President Teddy Roosevelt, other Dutch American politicians, and Abraham Kuyper himself, who also had been a founder of the Vrije Universiteit (Free University, or VU) in Amsterdam.

The University of Chicago agreed to the chair in 1909, if it was financed. The people promoting the chair understood that if the Dutch studies program attracted students, the university would continue to fund the position. The next step was to hire someone. That’s when controversy started—first, whom to hire, then whether the position would last.

In the 1890s, De Vries edited a newspaper associated with Kuyper’s Anti-Revolutionary Party, studied theology and law at the Vrije Universiteit, and earned his PhD there. One of his early publications was on the sabbath, Overheid en Zondagsviering (Government and Sunday Celebrations, 1899).

In the early 1900s, De Vries proposed a Reformed approach to economics, publishing Beginselen der Staffthuishoudkunde (Principles of Political Economy) in 1904. His goal was “a scientific approach to economics on the basis of Calvinist principle.” This kind of project fit well with Kuyper’s vision of Christian worldview and the mission of the VU.

In the book, De Vries argued that “revolutionary and evolutionary streams of thought came up with their own economic theories, which nurtured and worsened the social question.” The solution was a Reformed Christian view of economics. Emphasizing God’s sovereignty, providence, and common grace, he argued that “all economic life as well as the modern science of economics can be seen as fruits of the divine plan.”

De Vries sought a professorship at the VU, but his strong opinions alienated colleagues and one of his rivals won the position in political economy. De Vries continued to write as a Kuyperian-style Calvinist, emphasizing the role of worldview in shaping life. But he turned from economics to history. Notably, he wrote a study of the intellectual-politician who had inspired Kuyper, Mr. G. Groen van Prinsterer in Zijne Omgeving (Mr. G. Groen van Prinsterer in His Environment; 1908).

Looking for new opportunities for a teaching job, and visiting his son, De Vries traveled from the Netherlands to the United States in 1910. In 1911, the Chicago branch of the General Dutch League proposed De Vries as the candidate for the professorship at Chicago.

A window into the controversy over the League’s nomination can be seen in Onze Toekomst (Our Future), a Dutch American newspaper in Chicago.

It is almost impossible to find copies of the Onze Toekomst today. Heritage Hall has a few original issues and excerpts of it translated into English. The excerpts are thanks to President Franklin Roosevelt’s New Deal program, the Works Progress Administration (later renamed the Work Projects Administration). Through the Chicago Public Library Omnibus Project, the WPA paid people to translate material from foreign language newspapers started by immigrant communities in Chicago.

The 24 March 1911 edition of Onze Toekomst included a story on the “Chair of Dutch History, Language, and Literature at the University of Chicago — A Delicate Task.” It seems to have been written by De Vries himself, responding to the controversy about his nomination and acknowledging that most Dutch Americans did not know of him.

The article reprinted a letter of recommendation by Abraham Kuyper, who praised De Vries as a “clever man” of “keen understanding” who was “thoroughly acquainted” Dutch history and language. That letter was followed by one from Herman Bavinck, Kuyper’s younger colleague and an influential theologian and intellectual in his own right. Bavinck wrote that the Dutch Chair would honor “Holland’s name” and that De Vries “would speedily prove that he was the right man there.” De Vries went on to describe his visit to the United States, stopping at a variety of universities, and speaking to branches of the “Holland Society.”

The 7 April 1911 issue addressed the controversy in more detail, in “A Chair of Dutch History, Language, and Literature at the University of Chicago — Obstacles.” It noted the names of professors from Hope College, the “Calvinistic college at Grand Rapids,” and professors from Evanston, Bryn Mawr, Hartford, Lincoln, Trinity College, Bloomington, Lake Forest, and Macon. It also described a “petition” from President Theodore Roosevelt in favor of the Dutch Chair (not a recommendation for a candidate).

The article went on to discuss the “nationalistic” movement among Dutch Americans and their pride in their ancestry, lamenting the long history of Dutch divisiveness and conflict. It also responded to a Hope College professor, “a certain Mr. S,” who wondered why the Dutch Chair did not go to Hope College.

Mr S. feared that a Christian scholar like De Vries would be “overwhelmed and compromised” by the secular atmosphere at Chicago, “like a mouse in a strange warehouse.” Mr S. also wanted the candidate to be examined for his faithfulness to the vision of Groen Van Prinsterer.

The article defended De Vries by arguing that a variety of Christian voices from different denominations could be found and heard at Chicago. It emphasized that Dutch Reformed people should not limit themselves to their own circles. If they do so limit themselves, then they will not be able to exercise influence in American society in any kind of public or national service.

As this debate suggests, the issue at stake was not just pride of place—at the esteemed University of Chicago versus the provincial school in Holland, Michigan. It also seems to have been about whether Reformed folk should stick strictly to their own kind, for the sake of securing orthodoxy, or should exercise influence widely, for the sake of Christian influence.

In any case, De Vries got the job.

During the two years De Vries held the Dutch Chair at Chicago, he not only taught courses in Dutch history, language, and culture, he published pamphlets and books based on his lectures, notably his inaugural lecture, The Influence of the Nations of Europe, Especially of the Netherlands, on the Character, the Institutions and the Development of the American Nation (delivered in 1911; published in 1912). Examples of his books are Dutch History, Art, and Literature for Americans (1912) and What the House of Orange Has Done for America (1913).

The money raised by the General Dutch League to fund the chair ran out after two years. Students in De Vries’s classes—he drew several dozen—advocated for continuing the position, as did some church groups. But the University of Chicago cut the position rather than pay for it. It is not clear what De Vries’s colleagues or the larger university thought about him as a teacher or scholar. The League felt betrayed.

There is little evidence what happened to Tieman De Vries after 1913. He continued to publish. He lived in the Chicago area, was naturalized as a U.S. citizen in 1921, and died in July 1935. His books and pamphlets reflect the kind of work the League wanted him to do, on Dutch culture in America, but also the Reformed thought that had characterized his work in the Netherlands, such Evidence on Christianity and Evolution (1932).

Despite De Vries’s brief tenure, the work of the League bore fruit, but not at the University of Chicago. It paid off for Calvin College.

In 1915, Calvin hired one of De Vries’s students, Henry J.G. Van Andel, who studied at Chicago and earned his M.A. degree there. Van Andel was the first professor of Dutch language and literature at Calvin. A talented musician, and a painter, he also served as the college’s official organist. He taught language, history, literature, and art at Calvin into the 1950s. And he published two textbooks on Dutch language.

The cover image is of Tiemen De Vries in his study. It can be found in De Vries’s book, Dutch History, Art and Literature for Americans,Lectures Given in the University of Chicago (Grand Rapids, MI: Eerdmans-Sevensma, 1912).

In addition to linked sources, this blog post draws on an essay by Herman De Vries, “Henry Van Andel’s Dutch Grammar Books and the Language Problem,” in Dutch-American Arts and Letters in Historical Perspective, and work by Robert Swierenga.