Churches and Migrations in Chicago 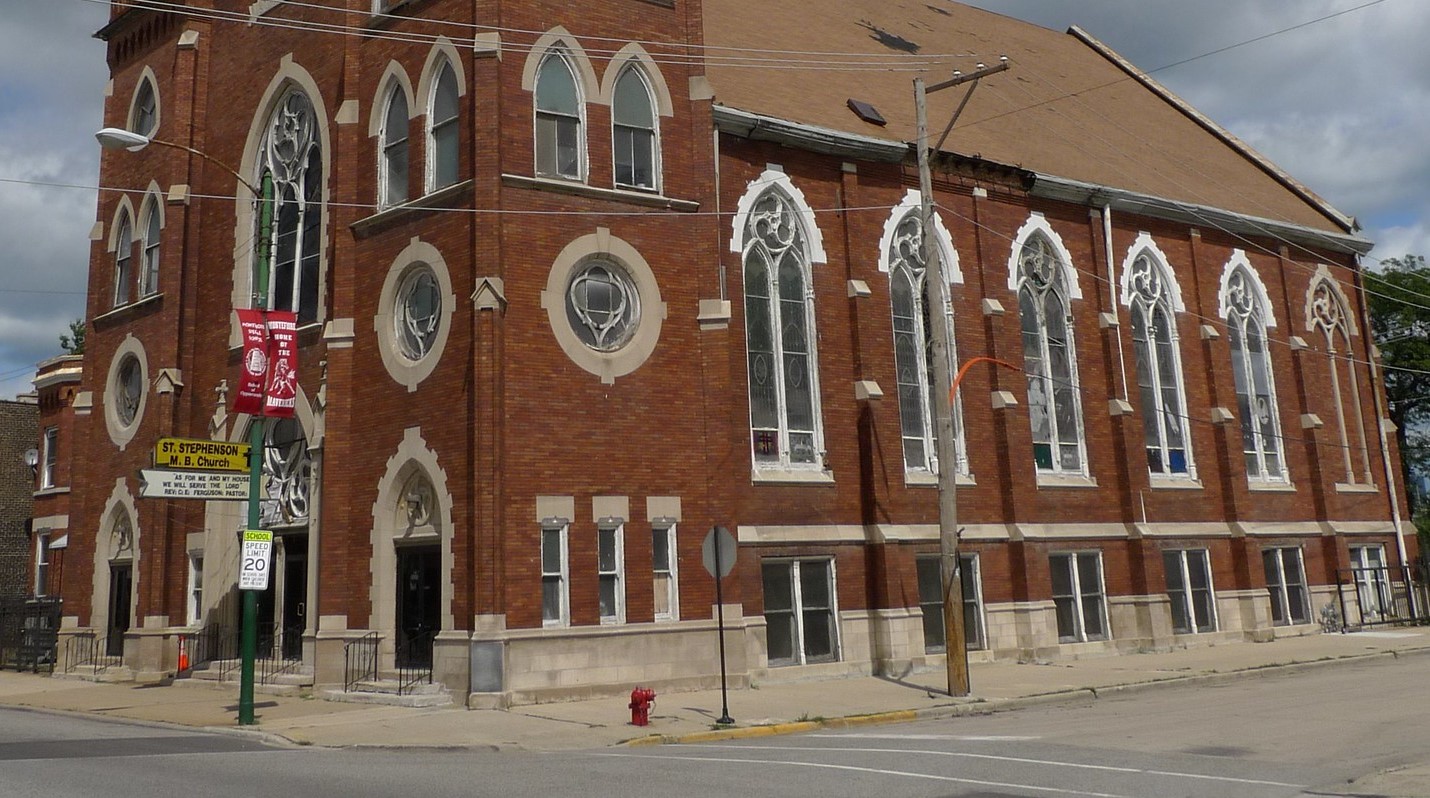 For the past half year, I’ve been doing re-photography posts on Heritage Hall’s Facebook site. Usually it is two pictures, one from the deeper past and a more recent image, sometimes a photograph I’ve taken. Some of the posts include a story about the congregation, from The Banner or something that I have pulled together. I planned to do the same for this week’s post, but I found that I needed to use too many photographs to really tell the story. So, instead, I’m doing a short blog post.

If you’re the right age, Dutch American, and from Chicago, you just might recognize the building in the cover image. But the sign probably won’t be familiar. First Christian Reformed Church in Chicago built the facility in the early 1920s, but it occupied the site for only about 25 years. That seems like a very American story–i.e., moving on. The CRC’s history has been marked by the migrations of its members and their congregations.

The images below are of First Christian Reformed Church in Chicago, mostly of its building on Ashland Avenue. I’ve also included one image of its previous (second) facility on 14th Street and one of its current building in Berwyn.

The story here is not just about First Christian Reformed Church in Chicago, however. That story is interesting enough, as the congregation has moved multiple times. More broadly, First CRC’s history is an example of ethnic succession, first as European immigrant groups moved into and out of neighborhoods, succeeding each other, then in some neighborhoods as white ethnic groups moved out as African Americans moved in. [You can “right click” on the three images below and then click “view image” to see larger versions.]

The larger story, then, is one of migration and succession, along with changes to the neighborhoods themselves, economic change, and political change. And it’s not an equal story.

European immigrant groups, especially those from southern and eastern Europe, experienced discrimination on religious grounds and ethnic ones in the nineteenth and early twentieth century. That discrimination sometimes included informal housing covenants and practices by banks and realtors that kept certain immigrant groups out of some neighborhoods (e.g., Jewish, Lebanese, and Turkish immigrants). But within a generation or two, those immigrants moved on to working class and middle class neighborhoods that were nicer and had better job opportunities.

African Americans migrated from the South in large numbers to places in the Detroit, Chicago, and L.A., as well as smaller cities and towns in the North and West, in the early-to-mid-twentieth century . Compared to European immigrants, they faced enduring housing discrimination that kept them out of many working and middle class neighborhoods (and the better jobs in and near them). Often they settled in the neighborhoods where European immigrants or their children and grandchildren had migrated a generation or two earlier.

There is an elegiac quality to the building’s history. American history is a story of migrations; so too is modern world history generally. People move on, from one part of a nation to another, one country to another, and from rural areas and small towns to cities and suburbs. Church communities sometimes move with them. And yet there is loss, or at least nostalgia. We move on, but our nostalgia and our laments suggest that place matters to us and to our communities.

In these stories, too, we can see the ethnic and racial histories of migration and communities. The freedom to move and settle in new places was not equal among European immigrants, though it became much more so over two or three generations. That same freedom, and the opportunities that come with it, have been constrained and restricted in enduring ways for African Americans in cities from Boston and Detroit to Chicago and L.A.

For the larger story of First Christian Reformed Church in Chicago (and that of First Reformed Church), check out these essays by Robert Swierenga: “A Tale of Two Congregations” and “The Groninger Hoek: Chicago’s West Side Dutch.” You can get more details from his book Dutch Chicago.

For sociological analysis of race relations and churches in Chicago, check out Shades of White Flight by Mark Mulder. (It’s about CRC and RCA churches, but not about First CRC, specifically). Mulder emphasizes the role of place, church polity, and institutions in this history. (Check out this summary of the book.) Note also Mulder’s recent short book on churches and community engagement: Congregations, Neighborhoods, and Places.

For the complexities of race, class, and housing in Chicago from the mid-twentieth century into the past decade, check out this story in The Atlantic. On the larger story of African American migration to Chicago, here’s a short article in the Encyclopedia of Chicago. It has some recommendations about books. On religion and the “great migration” of African Americans from the South to the North in the early twentieth century, including Chicago, check out Milton Sernett’s book, Bound for the Promised Land.