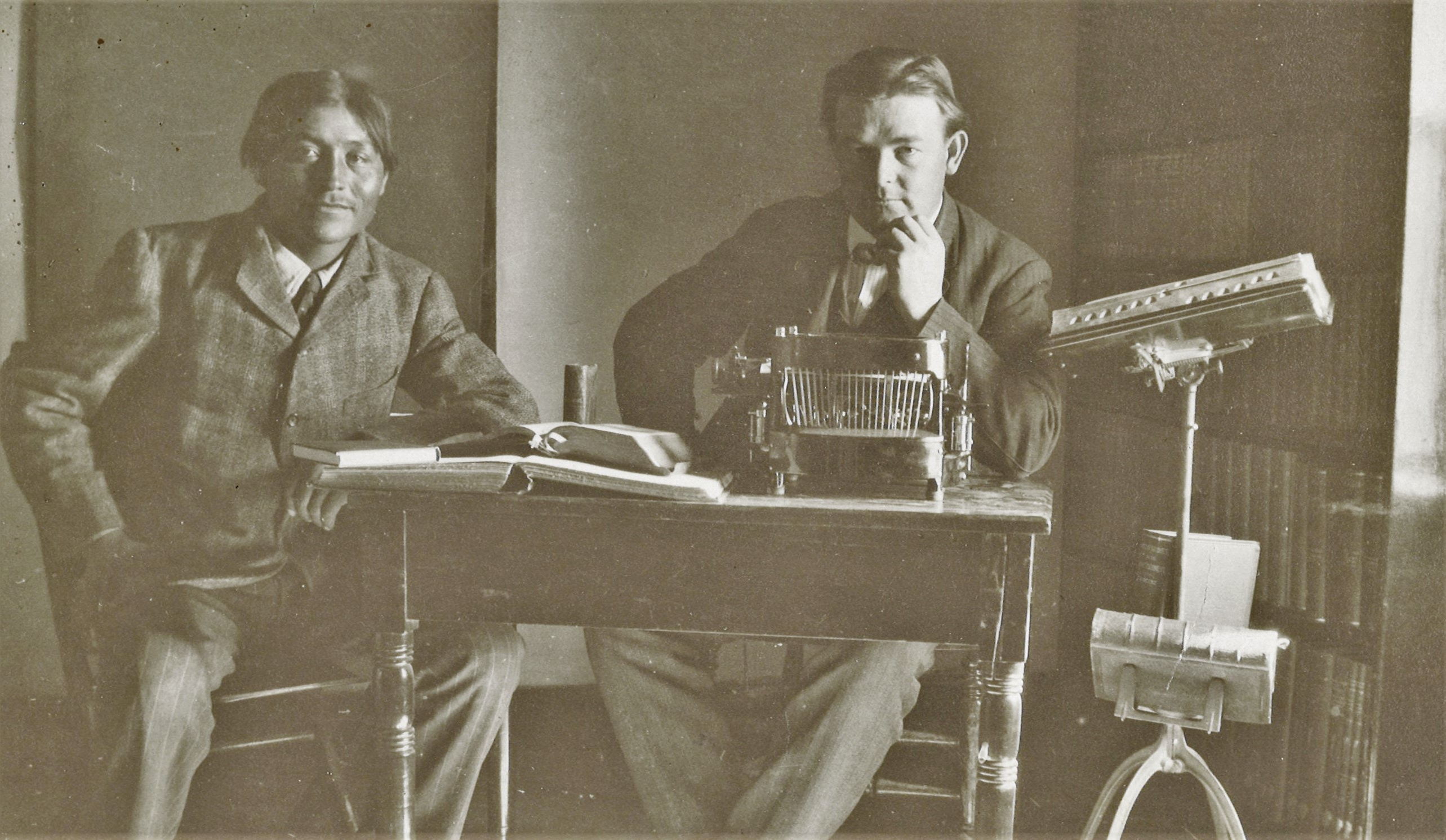 Edward Becenti (1882-1929) was a Navajo who converted to Christianity and worked with the Christian Reformed Church (CRC) as a missionary. We don’t have many of Becenti’s own words on record. But we know that his was a fluent, compelling voice.

I first came across Becenti when I was looking for images of another Navajo leader, J.C. Morgan (1879-1950). Morgan also worked with the CRC as a missionary and knew Becenti. He later became the first chairman of the Navajo Council (in 1938). In histories of missions among the Navajo, a picture of Becenti with a CRC missionary—Leonard P. Brink—sometimes is mistakenly identified as depicting Morgan. [See cover image of this blog post. It shows Becenti and Brink studying together in the early 1900s.]

I discovered this error when researching Morgan and became curious about Becenti. Like Morgan, Becenti was raised by Navajo family and kin who remembered traditional ways and the time before conquest and captivity. His father was a “Chief Judge” among the Navajo and visited the Chicago World’s Fair in 1893. Like Morgan, conquest and assimilation policies forced a young Edward Becenti to find his path among Navajo ways and modern, white, Christian, and American ones.

Most of the material I found on Becenti was gathered by Henry Ippel, who worked in Heritage Hall after he retired from the history department at Calvin University in 1984. Ippel also visited the Rehoboth Christian School community regularly, working on its history as a mission school. In addition to finding material about Becenti in magazines such as The Banner and The Christian Indian, he also got to know some of Becenti’s descendants. Ippel published a short biographical sketch of Becenti in the Rehoboth Christian School News in 2004, on which I’ve drawn.

Becenti first encountered missionaries from the CRC in his teens, in the mid-1890s. He was a student at the Indian Boarding School at Fort Defiance, Arizona, when Herman Fryling and Andrew Vander Wagen started a CRC mission there. With some of the other students, Becenti attended a Bible study the two missionaries organized. Vander Wagen soon moved on to a mission among the Zuni.

Vander Wagen and Becenti met again in 1902 at a trading post northeast of Gallup, NM.  Vander Wagen was looking for a new mission site. He noticed a young man staring at him. A Navajo woman pointed out the young man, Becenti, as someone who spoke English. Becenti asked if the missionary remembered him. It took Vander Wagen a few minutes, as he recalled the names of the students in the Bible class and tried to connect the boys he remembered to the young man in front of him. He eventually recognized Becenti and confirmed the young man’s memory of him. In Vander Wagen’s telling, Becenti exclaimed that Vander Wagen and Fryling “were the best friends I have had in the world!”

Excited by the unexpected encounter, Vander Wagen asked if he could give a brief gospel message. Becenti explained the request to the Navajo at the post and got their permission. Then he translated Vander Wagen’s brief message. Vander Wagen hired Becenti on the spot and Becenti worked at the mission in Zuni, Arizona, for a time. It is hard to know what Becenti’s goals were in this moment. He was not yet a Christian. Perhaps he judged there was opportunity in renewing his connection to the missionaries.

In 1904, Leonard Brink, a CRC missionary in Rehoboth, NM, hired Becenti to haul lumber for the mission. Brink also performed a Christian marriage for Becenti and his wife at Becenti’s request.

Soon Becenti was teaching the Navajo language to the eager Brink, six to eight hours a day, painstakingly helping him with pronunciation. Brink credited Becenti for his knowledge of Navajo. Becenti also helped Brink translate the Bible, catechisms, and other missionary material into Navajo. In the process, he became a Christian. He asked Brink to baptize him in 1909, and his children and wife Johanna eventually were baptized too. She did not speak English and was the first member of the local church who had not attended a boarding school for Native American children.

Becenti became a deacon in the local CRC congregation, the first Navajo man chosen for such ordination. Brink reported, “His opinion is especially valuable as understanding both Navajo and English. lf he is a prophecy of what Navajo Christians are going to be, we may take courage. At present I am giving him special training in Biblical knowledge and he shows wonderful interest and zeal.”

Following his own inclination, and with Brink’s encouragement, in the 1910s and 1920s Becenti served as a missionary in a variety of ways. “I told him that my intention was to send him out off and on to hold meetings with his scattered people,” Brink remembered; “he was glad, and said: ‘I wish I could spend all my time that way.’”

Becenti was not just a translator but helped to interpret the gospel message culturally in ways that made sense to his Navajo people. In the process, he became an effective preacher. Descriptions of camp meetings list Becenti and Morgan as speakers, along with the Dutch Reformed missionaries. Jacob Kamps, a CRC missionary, remembered it this way.

Mr. Becenti was an interpreter, not merely a translator. He sought to convey the spirit of a message as well as the thought and often he said more than he was asked to. Once we were giving a talk on the ten commandments. I had said they served as a mirror to show us our faults and our sins. As he interpreted this part of my message the people began to laugh. I wondered why and felt a little bit uneasy. They quieted down very soon but the next day I asked him what he had said to make the people laugh. “Well,” he said, “just what you told me; only I added that often we look at each other instead of God’s law. If we do, we will probably be just like two men who were laughing at each other. The one said: ‘What are you laughing at me for?’ The other replied, ‘Why your face is all black. But what are you laughing at me for?’ ‘Why?’ he said, ‘your face is black too.’ They all laughed but he soon stopped them by saying in a very convincing way that this was no laughing matter.”

Kamps, who worked at Rehoboth from 1927 to 1951, knew the mature Becenti. He viewed Becenti as genuinely Christian, authentically Navajo, and highly effective in his work. In formal terms, Kamps recalled, “he was a man of limited training.” But he was gifted intellectually and “a convincing and persuasive speaker.” Becenti even followed his father’s footsteps to Chicago, speaking at CRC churches about the work in New Mexico.

How do we recover the voices and experiences of people like Edward Becenti, where we know something of them but mostly through the memories and reports of others? For J.C. Morgan we have a variety of material in his own words—letters, articles in magazines such as The Banner—and a variety of church, political, and government records. We hear Becenti’s words only indirectly, quoted or summarized and remembered by missionaries. Henry Ippel also was able meet some of Becenti’s descendants. So, we know something of his family legacy.

Becenti died suddenly of appendicitis in his late 40s, in October 1929. The funeral was in Rehoboth, and they laid him to rest there. Stories in 1929 and 1930 recounted Becenti’s work and poured out grief at a life cut short. They can be found in The Banner and mission magazines such as The Christian Indian.

Morgan spoke at Becenti’s funeral, saying:  “He was always ready to go. Nothing stayed him. Indeed, he has kept the faith.” Both men worked as missionaries for the CRC, translating, interpreting, and preaching. Both were effective because they remained vitally connected to their indigenous culture and community. Morgan left the CRC in 1937, frustrated at not being recognized as a missionary with the same status as seminary-educated, ordained, white clergy.

We don’t know what Becenti would have thought of Morgan leaving. Doubtless, he would have recognized that the CRC did not see missionaries like him and Morgan as equal in status with CRC clergy. And he would have recognized how this CRC viewpoint echoed the racial assumptions that shaped had the conquest of the Navajo and federal assimilation policies. We have no record of any involvement by Becenti in politics or his views of assimilation policies and Navajo relations with the federal government. So we are left to wonder.

Reading what the missionaries said directly, and reading between the lines, Becenti seems to have chosen to engage with the missionaries, Christianity, and the wider American culture, rather than avoid them. He seems to have found his own way of keeping faith with both his Navajo traditions and the Christian ways that he made his own. And this made a profound impression on the people he worked with.

Perhaps most importantly, Becenti’s and Morgan’s stories are a reminder that the history of Christianity among the Navajo is its own story, distinct from the stories of CRC missionaries. Both sets of stories are important to tell. And they are entangled stories. But they’re not the same stories.