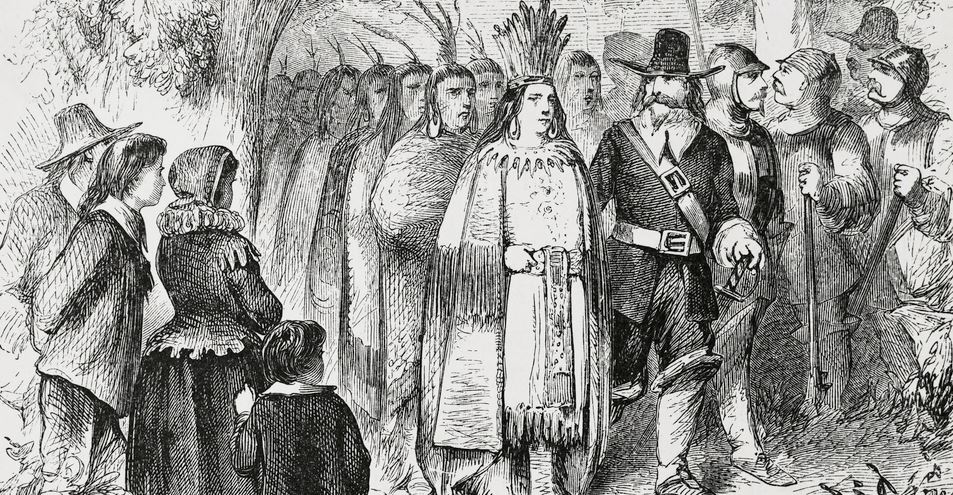 Thanksgiving is, in one sense, my favorite holiday, whether celebrated in early October in Canada or late November in the United States. For years, my wife and I have gotten together with friends here in Grand Rapids and enjoyed a nice meal and a great day. There’s little of the chaos that comes with a commercialized Christmas season–admittedly, only so long as you ignore “Black Friday” nonsense.

On the other hand, as a historian of North America, one who teaches Native American history, I know well the complex, tragic reality behind the happy myths associated with the holiday. The image you see as the cover of this blog post depicts Massasoit, a Wampanoag leader, visiting the Pilgrims, who arrived in Massachusetts in 1620.

The mythic story is about friendly “Indians” who helped the Pilgrims as they struggled to survive in an unfamiliar environment. The history is a story of leaders like Massasoit and their people struggling to manage relations with the invading Pilgrims, the Wampanoag debating what to do, and the Wampanoag and other Native groups competing with each other as they long had done. What impact would the Pilgrims have? Were they potential allies? Were they a threat? What we know today was not so clear in 1620.

Massasoit and other Native leaders like him knew that more settlers likely would follow. And surely they did, with the Puritans arriving a few years later and in much larger numbers than the Pilgrims.

Down the Atlantic coast, in Virginia, the English were settling too, with the planter class trying to enslave Native peoples, importing white indentured servants, and soon importing African slaves. Everywhere in between, and to the North, other Europeans had arrived or soon would follow. French, Dutch. Swedish. And more.

Further to the south and to west, the Spanish had been in the Americas for over a century, conquering, pillaging, killing, enslaving, and setting up colonies. The Wampanoag might have been surprised by sight of the Mayflower the day it arrived. But they had heard of Europeans and knew something of the complex challenges signaled by the arrival of the Pilgrims.

Settlements like the Pilgrim’s Plymouth colony were not just a “new world” for Europeans. The European invaders also were making “new worlds” for the indigenous peoples of the Americans.

We tend to look at the story from East to West, seeing it from European points of view, as they crossed the Atlantic. We also must see it from Native American points of view, looking from West to East, toward the Atlantic and the arrival of ships disgorging merchants, missionaries, soldiers, grifters, adventurers, explorers, and settlers–invaders all from a Native viewpoint.

Here’s three resources from which to see this history in fresh ways, especially from Native American points of view.

Finally: Dutch Thanksgiving. What’s up with that? Two things.

To explore these questions, check out this story from The Dutch Review, “Leiden was the key to the origins of Thanksgiving.”

Also check out a recent 400 year anniversary website about the Pilgrims leaving the Netherlands and landing at what became known as “Plymouth Rock” in Massachusetts. It’s is being created by more than a dozen communities from the U.S., Great Britain, the Netherlands, and the Wampanoag Nation. It includes a variety of celebratory events but also some history curriculum and information. Here’s a link to the education page from the website.

As you’ll see, not unlike the holiday, the website is a mix of myth, history, celebration, and commerce. It promotes not just the history and 21st century ideals of diversity and inclusion, but also tourism inspired by the 400 year anniversary.

If you read between the lines a little, you can see the strains associated with 400 years of contested history.