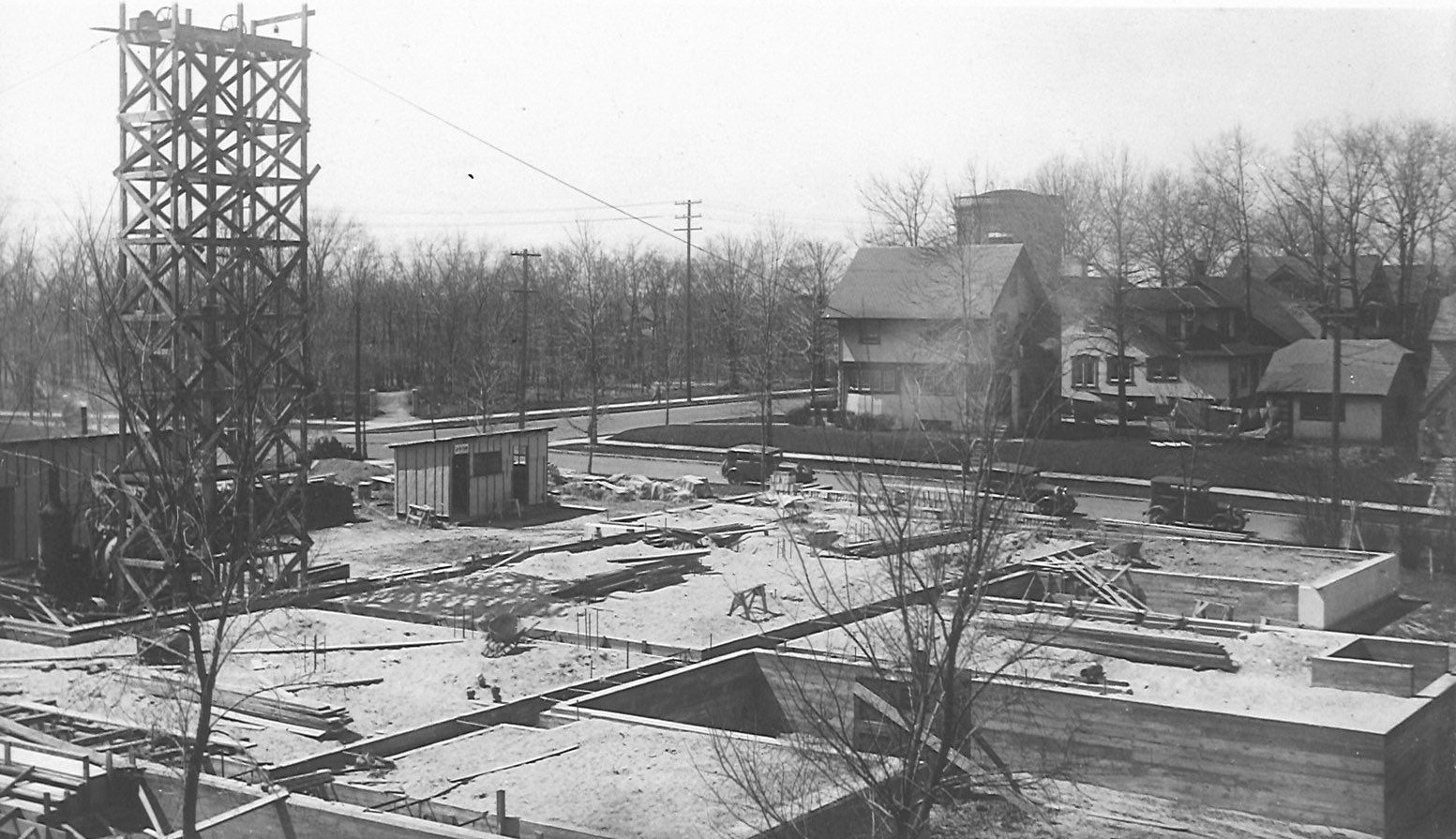 In the course, we learn together what historical thinking looks like, how it works, and what its value is for society. I require students to write a paper on some aspect of historical theory or practice, with these larger issues in mind. A couple of the students are going into teaching, and I’m helping them with paper topics related to the history education.

Training teachers was one of the leading reasons for creating Calvin College in the 1910s, first as a junior college then as a bachelors degree granting college. The Christian Reformed Church (CRC) did not just need well-trained pastors; the Christian schools associated with it needed well-trained teachers.

The Theological School and its preparatory department began teacher education in 1890, with a course called “Pedagogy.” The course was meant to help graduates of the preparatory school pass county and state exams to qualify for teaching in elementary schools.

The 1902-1903 yearbook (i.e., catalog of classes and programs) listed three programs of study: seminary, college, and teacher preparation. And in 1911, the institution had 24 seminary, 33 college, and 169 preparatory students. Professor Jacob Vanden Bosch emphasized that the “worth of our College” for the church is not just the clergy it educates, but the teachers it trains for “our free Christian schools from the Atlantic to the Pacific.”

The church—or at least some sectors of it—were not sure that the CRC should be running a college and preparatory school. Many people thought that the latter especially should be cut loose and given to a school society to run.

Professor A.J. Rooks, principal of the college and the preparatory school, responded to this challenge in the 1910s by promoting the idea of Christian schools adding grade 9 and 10. He recognized that high schools would reduce the number of his own preparatory school students. But he hoped that the demand for teachers for grades 9 and 10 would increase the number of college students at John Calvin Junior College, as the college was named then. The trouble was competitors in teaching training.

Christian high schools in Chicago, Rochester, NY, Hull, IA, and Grand Rapids, MI, were developing “normal school” programs to train teachers. “Normal schools” in the U.S. were high schools that trained teachers for elementary schools. In Europe they were colleges that trained teachers for primary and secondary schools. The creation of a normal school society in Grand Rapids in 1918 especially was a danger to the success of Calvin’s program.

Other colleges also provided competition, notably Grundy College in Iowa. Grundy was founded by German-speaking Reformed immigrants and was associated with the CRC. By 1919 it had a preparatory program and a normal school.

Professor Rooks viewed normal schools and Grundy College as competition not just for Calvin Junior College and its teacher training program, but for the larger dream of a four-year, bachelors degree granting college. A four-year college would need at least 10 programs and 200 students to be accredited by the North Central Association. Rooks tried diplomacy with the emerging Grand Rapids normal school association, but it and its leader, Rev. Herman Hoeksema, rebuffed him.

In 1919, the new president of Calvin College, Rev. J.J. Hiemenga, proposed and helped organize a Christian high school society, succeeding in 1920. He also promoted cooperation between the college and high schools associated with the CRC. His goals were (1) to ensure the quality of the education at those schools, so graduates would be ready for Calvin College programs; and (2) to get graduates to come to Calvin for post-secondary education.

Calvin added a fourth year in 1920, becoming “a full-fledged college.” Hiemenga envisioned the college as “the center” of “higher education” for CRC communities in the U.S. He believed that Calvin would be able “to compete with any institution of its kind.” Like Rooks, he worried that competing programs—Calvin, normal schools, and Grundy—might put the CRC “in danger of losing our strength in the field of higher education.”

To implement his vision of Calvin College and CRC-related high schools supporting each other, Hiemenga hired William Henry Jellema as a professor for the college. The Jellema hire freed Professor Johannes Broene to focus his time on developing the education program.

Meanwhile, Broene started building the education program at Calvin. To “Principles of Education” and “History of Education,” he added “Practice of Education,” School Administration,” and “Principles of Secondary Education.” Other departments added secondary methods classess in history, English literature, math, biology, and foreign languages. By 1922, six graduates of Calvin qualified for the new A.B. (baccalaureate) degree and the state certificate as teachers.

The pitch that Hiemenga made to donors built on Broene’s work. Hiemenga stressed unity, rather than “too many separate, local institutions” and “unnecessary duplication.” He explained that the first goal of the new, four-year college would be to train teachers. And he emphasized that with its resources, Calvin College easily could add a normal school program.

A final challenge to Hiemenga’s plan was the National Union of Christian Schools, founded in 1920 by leaders of the Chicago Alliance of Christian Schools. The leaders of the CACS and NUCS were not sure how to achieve uniform standards and Christian normal school training, however. Some wanted a society run normal school program. Others thought that NUCS should merely define uniform standards for training.

In the space created by this uncertainty, Hiemenga saw opportunity. He proposed cooperation between Calvin and NUCS in working out a program of study. Calvin’s program would be the nucleus for it; NUCS could provide associated instruction. Calvin and NUCS could not agree on who would pay NUCS instructors in the program, however. Hiemenga again took action, hiring Henry Van Zyl, the principal of the elementary school in Hull, Iowa. Van Zyl would teach practical work and direct the normal school program at Calvin. The college gave Van Zyl leave to get his A.B. at the University of Chicago and proposed that he start at Calvin in 1923.

Things came together in 1922. Broene continued to the build the education program, adding courses in psychology, child psychology. Courses in “practical work” would start whenVan Zyl arrived. The state of Michigan approved the new normal school program at Calvin. Graduates would receive a three-year state certificate; after three years of teaching, they could qualify for a lifetime certificate. By 1924, the college offered a bachelor’s degree in education.

Calvin’s success, and trends in higher education, came at the expense of its competitors. Several Christian high schools continued to offer normal school programs for prospective elementary school teachers. Hiemenga urged that they be closed, for the sake of efficiency. Accrediting associations like North Central also discouraged such programs in high schools. Only in Iowa did a normal school program last long, at Western Academy (later Western Christian High). It’s program continued into the 1950s, shutting down when Dordt College opened its doors.

Grundy College closed down in 1934, amid the Great Depression. It was revived in new form after World War II, however, first as Midwest Christian Junior College (1953) and then Dordt College (1956), now Dordt University, in Sioux Center, IA.

The context for Dordt was the G.I. Bill and the massive expansion of higher education in the U.S. Trinity Christian College (Chicago), King’s University (Edmonton, Canada), the Institute for Christian Studies (Toronto, Canada), and Redeemer University (Hamilton, Canada) eventually joined Calvin and Dordt as institutions associated with the Christian Reformed Church in North America.

The story of teacher education at Calvin College–like the stories of normal schools, Grundy College, and the other universities associated with the CRC–are a reminder of two things. The first is vision; the second is the practical matter of resources, whether raising funds or recruiting students.

A “Reformed way of thinking,” Calvin Professor Samuel Volbeda explained in 1926, “craves unity, organic unity,” and “completeness.” The vision of Christian education was incomplete with only primary schools, high schools, and a college. Without a university, there would be a “missing link.”

The post-World War II boom led Calvin to jump from a few hundred to a few thousand students. Likewise, it allowed other CRC related colleges and universities in the U.S. and Canada to join Calvin and grow rapidly.

The cover image for this post is the Franklin Street campus of Calvin College under construction in the 1910s.

This blog post is based on work by Peter De Boer, a long time teacher at the high school and collegiate level, who taught in the education department for many years. It draws on material from “To Train a Teacher,” by De Boer. For more details and the larger story check out Issue 8:2 of Origins: Historical Magazine of the Archives (Fall 1990). Also note De Boer’s book length treatment, Origins of Teacher Education at Calvin College, 1900-1930: And Gladly Teach (Lewiston, NY: Edwin Mellon Press, 1991).