A Home for Dutch Sailors and Immigrants in Hoboken, NJ 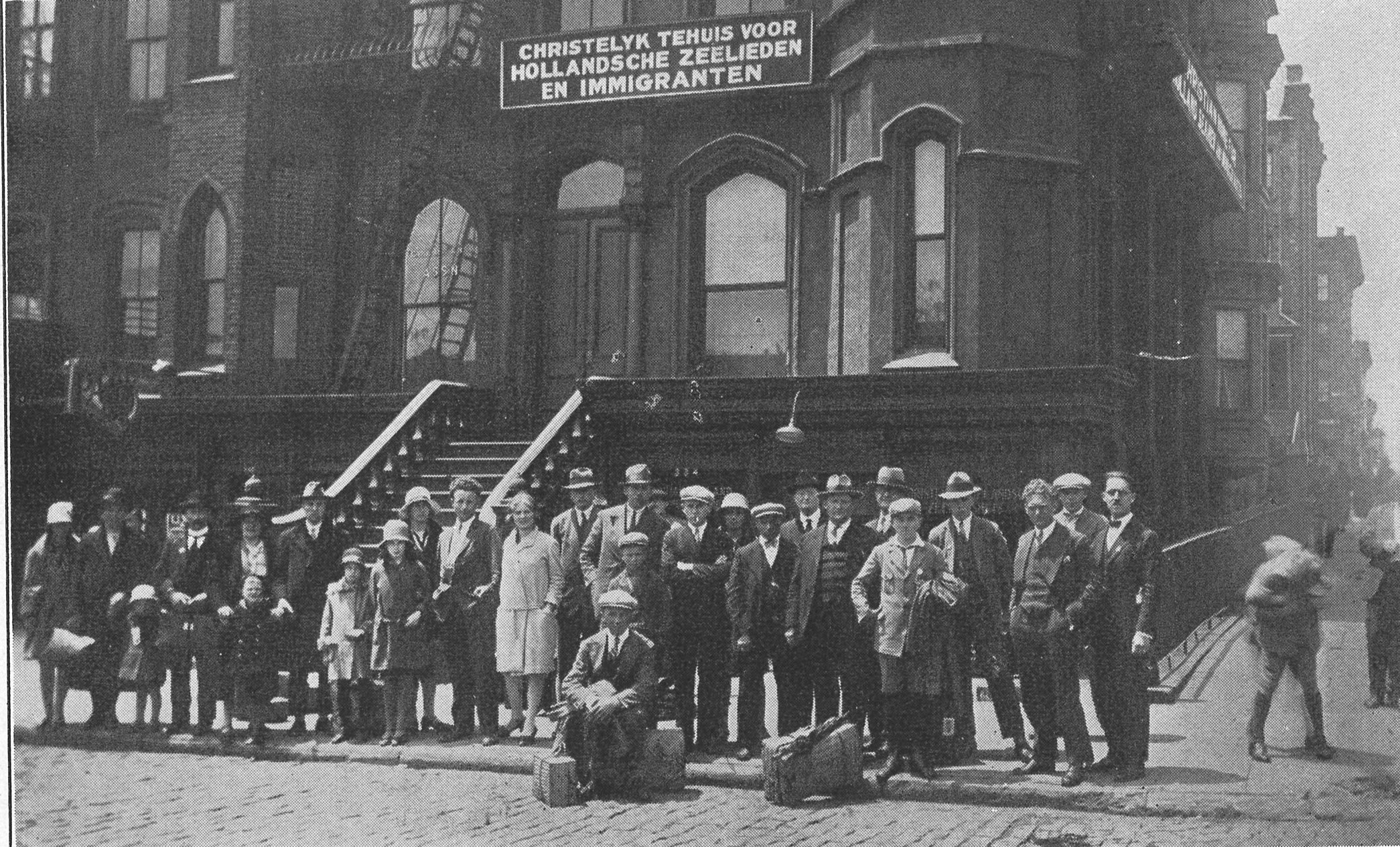 Last week, Calvin University got word that alumnus and long time librarian Conrad Bult had passed away. Conrad was a periodicals and reference librarian and a historian, and he was much loved in Hekman Library, Heritage Hall, and the history department.

This morning I was thinking about Conrad and browsing through the large postcard collection that he and his wife Dee created over many years. Heritage Hall acquired the collection from them a few years ago.

This postcard (left) caught my eye. It depicts the Christian Home for Holland Seamen and Immigrants in Hoboken, New Jersey, at the corner of River and 4th streets. The Holland America Line used the port facilities in Hoboken, rather than ones in New York City.

The postcard brought back childhood memories for me. I grew up hearing and reading tales of immigrant ships like the “Groote Beer” and arriving in Montreal and Halifax. I also remember visits to my family and church by Rev. Hans Uittenbosch.  For several decades, he ran the seafarer’s ministry in the port of Montreal, Quebec. I remember helping to make Christmas parcels this his ministry gave to sailors a long way from home over the holiday.

The Christian Reformed Church in North America (CRCNA) has had a variety of such ministries over the past century. They are associated with ports from New York and Hoboken to Montreal, Halifax, Vancouver, Seattle, and Los Angeles.

This blog post about the Christian Home for Holland Seamen and Immigrants in Hoboken is dedicated to Conrad.

The Synod of the CRCNA called for missions to seamen and immigrants in 1910. The denomination and local classes started organizing the Christian Home for Holland Seamen and Immigrants in Hoboken in the early 1910s. The mission opened officially in 1915, at 310 Hudson Street, in the building’s basement. Rev. J.J. Hiemenga of Passaic, NJ, later president of Calvin College, presided at the opening ceremonies for the home.

The demand on the facility quickly outgrew modest basement space, however. And, as noted above,  the mission purchased and moved to the larger building at 332-334 River Street in 1920.

In November 1920, The Christian Intelligencer reported that the Christian Reformed Church was securing $30,000 to build “a home for seamen and immigrants arriving at the port of New York. The denomination maintains a missionary and supports a home for seamen, but those in charge feel the need of a lodging house for newly arrived Holland immigrants, who usually disembark at Hoboken, NJ.” Conditions for immigrant families and sailors were bad enough that the CRC felt it necessary “to build a house that will contain sleeping quarters for a larger number of temporary lodgers.”

The CRCNA in the 1920s and 1930s viewed the Hoboken facility and mission as part of the work of its Board of Missions. The CRCNA also did “home missions work” in Jewish communities in Paterson, NJ, and Chicago, IL; among sailors and immigrants at Ellis Island in New York City; in new Dutch enclaves in various parts of the U.S. and Canada; and among the Navajo and Zuni peoples of the Southwest. The CRCNA also developed its first overseas missions in China and Africa in this era, and it supported Reformed churches in South America.

The Hoboken mission to immigrants and sailors provided a variety of services for people it served. Sailors could rest and relax after the stresses of a voyage. They could read newspapers and magazines, talk in their home language, and drink coffee free of charge. They could talk with Christian people interested in them and their lives. Staff from the home visited sailors who ended up in hospital. Perhaps the primary motive was “to battle against ‘king alcohol’ and ‘queen vice'” and promote “the moral, social, and spiritual uplift of Holland sailors.”

Immigrants could get help connecting with relatives and churches in the United States and get honest, friendly aid for bus or rail transportation to other parts of the U.S. (rather than be ripped off by “eager railroad and land agents” out to make a buck on “innocents abroad”). The Hoboken building also provided rooms for families stuck in the New York area for a day or more. The CRCNA did not want immigrants to be scattered and disconnected from family, kin, ethnic community, or church.

The CRC was not unique in its efforts to support seaman and immigrants in port cities such as Hoboken and New York. The Roman Catholic Church and other Protestant denominations and the ethnic groups associated with them did so too, as did Jewish immigrants. Nor were missions like these unique to the “new world.” Similar missions to sailors could be found in port cities in Europe.

Indeed, the CRC mission was not the first ministry to Dutch immigrants who arrived in Hoboken. “Before the Seaman’s Home opened Dutch immigrants passing through Hoboken were assisted by a series of ministers, mostly from the Reformed Church in America,” explains historian Bob Schoone-Jongen. “Rev. Thomas DeWitt of New York’s Collegiate Church, assisted the first arrivals in 1846. He then organized a committee of local ministers and businessmen who would meet incoming ships from Rotterdam. For about twenty years, Rev. Helenus Nies, pastor of the Union Reformed Church in Paterson, New Jersey, regularly met immigrants as they debarked at the Holland-American Line dock. He also had access to Ellis Island, where he looked after individuals being held there for further scrutiny. The Seaman’s Home represented the ‘coming of age’ of the Christian Reformed Churches in New Jersey, along with the Paterson Hebrew Mission, as home mission outreaches.”

Homes for sailors and immigrants like the one in Hoboken also should be seen as part of a larger set of social agencies created by churches such as the CRCNA. By the interwar years, retirement facilities, often named “Holland Homes,” could be found in larger, well off Dutch enclaves in Michigan and New Jersey. There also were CRCNA facilities for mental health and chronic illnesses such as tuberculosis. And there were Christian schools. Whatever the overlap with secular social service agencies, in practical terms, the Hoboken mission emphasized that it did not see the people it served as mere “clients” or “cases” but “Souls.”

Again, the CRC was not unique in this regard; a wide variety of immigrant groups created such ethno-religious institutions. The institutions were “immigrant to American” and “cradle to grave” in scope. In the short run, these institutions promoted strong ethno-religious ties that transplanted old world ways to the U.S. and Canada. Over the long run they helped settle and Americanize immigrants and their children and grandchildren. They went from being “immigrant” communities to “ethnic” communities.

The River Street area in Hoboken did not just cater to the needs and desires sailors and immigrants with social and religious services, however. It also had flop houses, hotels, cafes, taverns, and brothels. These institutions ranged from seedy “dives” to respectable facilities. Hoboken, as a story in the New York Times put it in March 1928, is “Where the North Sea Meets North River.” Parts of River Street were “Quaint and Quiet as a Holland Village,” the Times reported. The famous Dutch American painter, Willem de Kooning stayed at the CRCNA’s River Street facility in the 1920s.

River Street was a much “Europe” as “America,” Robert Coates observed in the New York Times story, noting that “in warm weather the place suggests the Old World rather than the New, and men sitting there with glass and sandwich may well fancy, as they stare across the quiet street, at the grass-growth docks and the steamers lazily unloading, that they are at home again in one of their toy-like villages of the Lowlands.”

Change the details, I imagine, and you would have a description of many immigrant neighborhoods in the U.S. and Canada. And the evidence suggests, they too are “Americanizing” or “Canadianizing” as children and grandchildren are U.S. and Canadian born.

By the mid-1950s, the Hoboken mission had begun to “outlive its usefulness.” Fewer immigrants came to the U.S. from the Netherlands, and many who did come arrived in airplanes not on ships. Tourists and immigrants more likely had some familiarity with English. And the Dutch government required ocean-crossing ships to have chaplains.

The organizers from local classes and the CRC began discussing the future of the mission. They closed down the Hoboken house in 1964-1965.

In its last report, in 1964, the Board of the mission said, “Almost fifty years have passed since our Church instituted this work of Christian mercy to immigrants, many of whom were brethren in the Lord. In later years when immigration tapered off, more emphasis was given to the work with seamen. Changing conditions and finally the moving of the Holland America Line [from Hoboken] to New York City clearly indicated that we had outlived out usefulness.” Their mission had been accomplished.

A year later, in its last meeting, the Board members reported on the business of ending Hoboken Seamen’s and Immigrants Home–transferring money from the home to classical funds, discontinuing as a non-profit organization, and requesting classis to record “the final dissolution of this body.”

The members of the Board also took time to thank each other “for their faithfulness” in the work of the mission and give thanks that “they could have been useful in this area of kingdom work.” Then they closed in prayer.

In the early 1970s, developers tore down the building in which the Christian Home for Holland Seamen and Immigrants had been located. They built in its place the John J. Grogan Marineview Plaza apartment towers and parking decks. Once a neighborhood of immigrants and transient sailors–blue collar folk–today the River Street area has luxury condos and real estate agents advertise “riverside chic” and “views that sweep the river, skyline and New York Harbor.”

Though the mission to immigrants and seamen in Hoboken ended in the mid-1960s, ministries to sailors in port cities by the CRCNA have continued into the present. The Ministry to Seafarers led by Hans Uittenbosch in Montreal from the 1960s to the 1990s has evolved over the years. It is still part of the CRCNA and is located in the larger Mariners House of Montreal. And it still collects Christmas parcels every November and December and hand them out to seafarers far from home.

The cover image for this post is immigrants in front of the Christian Home for Holland Seamen and Immigrants in Hoboken, from the mission’s report in 1930.