Harold Botts, Community Church, and the Detroit Riots of 1967 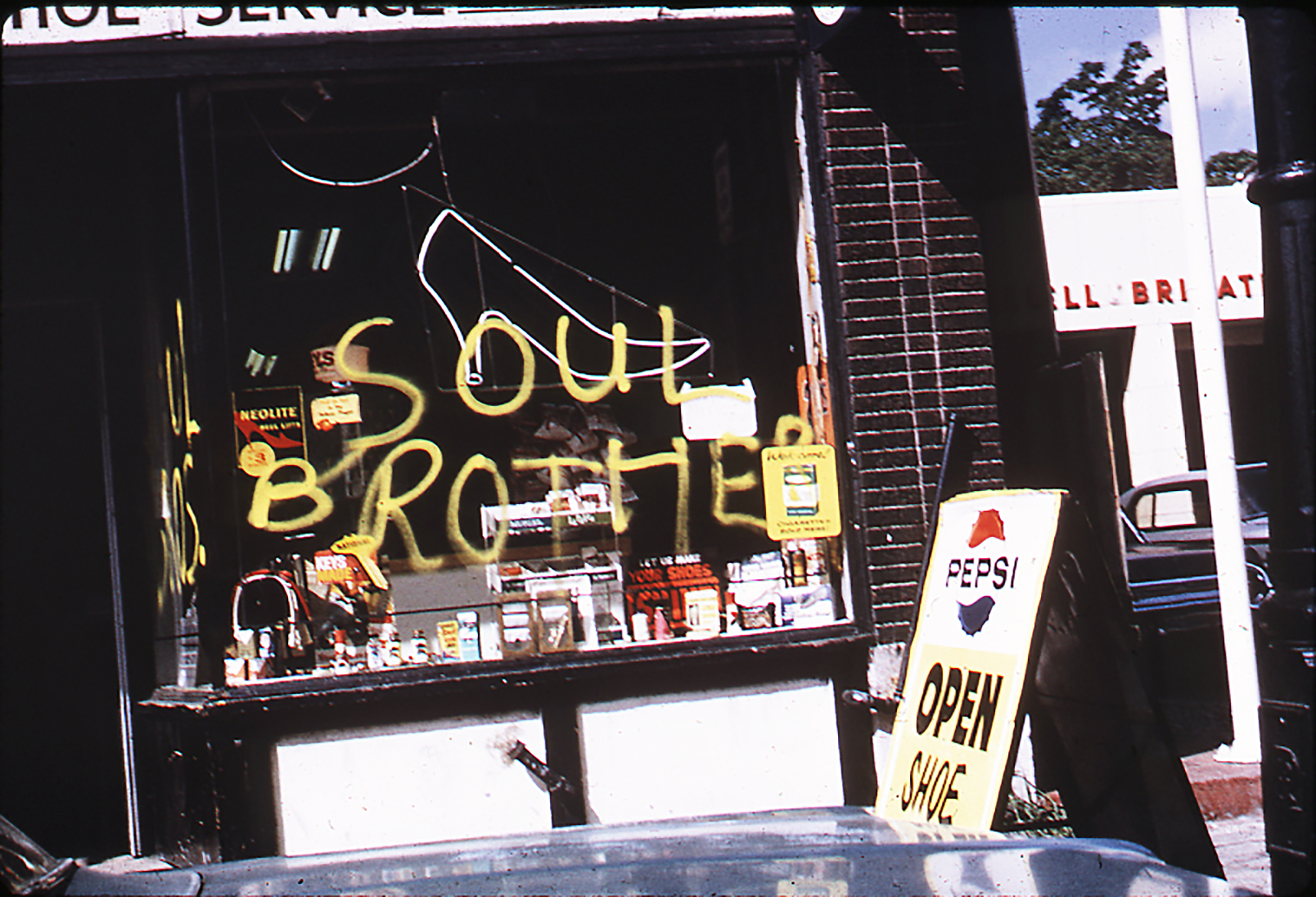 Reverend Harold Botts sensed a call to start a church in the African American community of Detroit in the early 1960s. He followed it and decided to serve a population that recently had been displaced by “urban renewal.” He had no idea that his church would be caught up in the “race riots” in the city in late July in 1967.

In the decades before World War II, over 120,000 African Americans had migrated from the South to the Motor City. They were seeking the good wages available in the city’s factories and an escape from the oppression of Jim Crow. During World War II and in the decades that followed, 50,000 more joined them.

When they arrived in Detroit—eight trainloads a day in some years—African Americans discovered that restrictive neighborhood covenants allowed them to settle in only a few small neighborhoods. The two largest communities, housing some 75 percent of the city’s African-American population, were the adjoining neighborhoods of Black Bottom and Paradise Valley.

Housing segregation forced people in these neighborhoods to crowd into poorly maintained tenements. Sometimes multiple families lived in one apartment. Rents were high because of the demand. To accommodate the many single workers in the area, boarding house owners developed the practice of “hot sheets.” Male workers would rent a room for just eight hours and sleep between shifts. City services, including garbage collection and law enforcement, were inadequate. Rats and criminals roamed the streets.

By the 1950s this “urban blight” in the shadow of Detroit’s thriving downtown had become an unacceptable eyesore for suburban commuters. The problem for city leaders was not the racism that created the blight and the lack of opportunity for its residents. It was that the neighborhoods were literally in the way of economic development. Mayor Albert Cobo pushed forward a plan for “slum removal” that called for Black Bottom and Paradise Valley to be completely bulldozed and replaced by an expressway, what is now known as the Chrysler Freeway extension (I-375). Rather than renewal for the people living in the two communities, the plan caused more upheaval.

For ten years the plan was on the books, but little progress was made. This only made things worse. Landlords refused to invest in tenements that would soon be demolished. The city gave little assistance to the relocation of the neighborhoods’ residents. It left them on their own to find new housing. Many moved to Virginia Park, a formerly Jewish neighborhood being vacated as its upwardly mobile residents moved to suburban Birmingham and Bloomfield Hills.

Virginia Park was the neighborhood Harold Botts chose to start a mission church. A tall, athletic man filled with energy, Botts was no stranger to the Detroit area. He had already planted a church in suburban Inkster but “had a heart” for the African American community. First CRC of Detroit (located in Grosse Pointe), the Dearborn CRC, and the newly formed Classis Lake Erie endorsed Botts vision.

Botts conducted a study of the area. His findings likely were similar to those of the Kerner Report of 1968. Riots shook cities across the U.S. in 1965, 1966, and 1967. The rioting in Detroit in 1967 was the worst in terms of length of time, property loss, injury, and death. The governor called in the National Guard to restore order. In its wake, President Lyndon Johnson created the National Advisory Commission on Civil Disorders, chaired by Otto Kerner, governor of Illinois, to investigate the causes of the riots. The Kerner Report described the community where Botts planted his church:

On either side of 12th Street were neat, middle class districts. Along 12th Street itself, however, crowded apartment houses created a density of more than 21,000 per square mile, almost double the city average. The movement of people when the slums of Black Bottom had been cleared for urban renewal had changed 12th Street from an integrated community to an almost entirely black one, in which only a number of merchants remained white. Only 18 percent of the residents were homeowners. Twenty-five percent of the housing was considered so substandard as to require clearance. Another 19 percent had major deficiencies.

With the support of the Home Missions agency of the Christian Reformed Church (CRC), Botts leased space on the first floor of an apartment building located on the corner of 14th Street and Pingree, where he began services almost immediately. Additional support from the Mission Board allowed him to purchase the entire building. He had the second floor renovated to provide a more spacious place for conducting worship services as well as Sunday School classrooms.

This was only the fourth outreach effort by the CRC to an African-American community, following the Manhattan CRC in Harlem, New York City, in 1952 and the Lawndale and Garfield Park churches in Chicago in the early 1960s. The leaders that established the two Chicago churches had both served as student interns in Harlem, but Botts was unique in that he was not trained in the Manhattan Church. He seemed to know instinctively what mission would require of him.

Botts brought the church to the people. He spent mornings in the office doing administrative work and preparing services for the following Sunday. Once noon hit it was out onto the streets and visiting people in their homes. Walking the streets gave Botts opportunities to meet children who attended Sunday School classes and teenagers who came to Youth Group. The job of a pastor, in his mind, was to bring the gospel to the community and then become an advocate for the community. And the Virginia Park community needed an advocate.

In his walks through the neighborhood, Botts discovered that there were many needs other than the spiritual concerns that could be addressed on Sunday morning. Parents worried about the education of their children, so he started a preschool and a tutoring program in the apartment building converted to a church. His wife Norene began classes in the church building to teach women to sew. Good paying jobs were scarce. Botts networked with Sam Van Till from the Dearborn CRC, an executive with the A&P grocery chain. Van Till helped a number of the neighborhood residents to obtain good-paying jobs with the company. This brought much-needed financial security to some of the residents of the community.

We don’t know much about what African Americans in Virginia Park thought about Botts and his community church. As often is the case, records reveal more about the missionaries than the local community. We can only glean African American perspectives indirectly.

A powerful indication of how African Americans viewed Botts and his work in the neighborhood became apparent three years after he began the ministry. In late July of 1967, Detroit experienced the worst “race riot” in the nation’s history. The riot began when the police raided a “blind pig,” an unlicensed drinking establishment located on Clairmont and 12th Streets. As the Kerner Report argued, the deeper cause was the economic and social problems created by racism and segregation. The week-long riot left 43 people dead, 342 injured, and 1,400 buildings burned.

Botts, a white pastor, had become a “Soul Brother.” He had spent many hours over the previous three years walking the streets of the neighborhood, getting to know people, and helping care for the community. People in the neighborhood saw him and the mission as part of the community. The apartment building housing the Community Church came through the week undamaged.

The rioting forced grocery stores to close. In response, Botts and seminary intern Wim Dirksen brought carloads of food to the church. Six white students from Unity Christian High School in Hudsonville, Michigan were serving on a Summer Workshop in Ministries (SWIM) team. They lived in the church apartment building just six blocks from the corner of Claremont and Twelfth Street where the riot began. They spent the week when the riots were raging handing out the donated food.

Douglas J. Vrieland grew up in Detroit and Grosse Pointe and has served as a pastor in the Christian Reformed Church and chaplain in the U.S. Navy.

For more about Reverend Botts, the church, and the civil rights movement in Detroit, see Vrieland’s recently published book, The Fort: Growing Up in Grosse Pointe During the Civil Rights Movement (2020).

The cover image of the blog post is from the digital collections of the Detroit Public Library. ” View of a storefront window spray-painted with “Soul brother” during the 1967 riots in Detroit.”