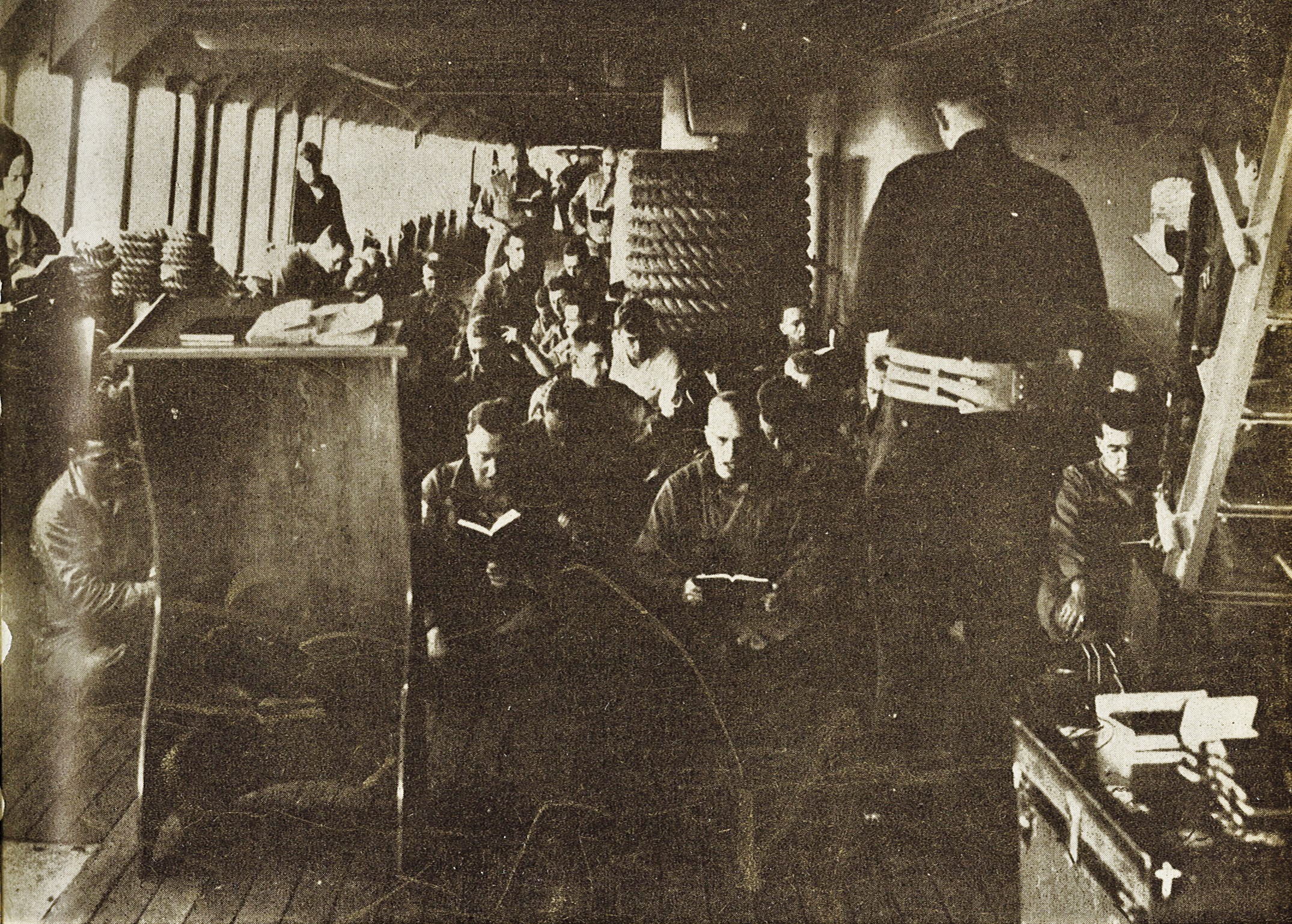 “Christianity isn’t passive–it’s active,” said a WWII veteran in 1945, recalling the lessons he learned during the war. Over 16 million Americans served in the United States Armed Forces during WWII. In 1991 the Christian Reformed Church conducted a survey of veterans and their experiences. Typically, veterans served three to five years in one of the US military branches (army, navy, marines, coast guard). Many of those surveyed described the culture shock that followed being drafted and the significance of their experiences in the military.

Not only did the war profoundly influence American soldiers and sailors. Their return home at the end of the war changed American culture and society. The Christian Reformed Church (CRC) and Calvin College and Seminary were deeply influenced by veterans.

During the war, the federal government passed the Servicemen’s Readjustment Act of 1944, more commonly known as the GI Bill, to help the returning soldiers reacclimate to civilian life. By 1956 more than 7.8 million WWII veterans had participated in G.I. Bill-sponsored education and training. Calvin College, for example, grew from several hundred students in the early 1940s to over 2000 by 1960. Additionally, Christian Reformed leaders started two more colleges, Dordt in Iowa and Trinity Christian in Chicago.

The influx of soldiers attending college led to an increase in educated CRC members who settled into productive long-term careers in the economic boom years of the 1950s. Many of those graduates became pastors and teachers, and many more joined church councils. According to the CRC’s survey, 87 percent of respondents became elders or deacons and only 5 percent took no position at all.

Religion and faith were tremendously important to American soldiers in WWII. Religious beliefs and practices and ideas of freedom of religion are basic elements in American culture and this ethos naturally extended to the US military. Several agencies took charge of caring for the spiritual needs and morale of the US Armed Forces, including the Chaplain Corps. Typically, there was one chaplain for every 1000-1200 soldiers and these chaplains varied in religious affiliation.

According to the CRC’s survey, Christian chaplains included Baptists, Lutherans, Reformed (CRC and RCA), Roman Catholics, and Presbyterians. Baptists were the most highly respected by those surveyed, taking 23 percent of the vote. It is unsurprising that Baptist chaplains had the highest approval rate as they represented the largest religious group in the US. Thus there were significantly more Baptist chaplains in the armed forces than chaplains from any other denomination.

Although the CRC clergy were only a tiny minority of WWII chaplains, Christian Reformed chaplains and soldiers sought each other out. Only this factor explains CRC chaplains being represented in the survey at all.

Soldiers’ experiences of religious diversity are perhaps the most interesting findings in the survey. When asked about the religious affiliation of their three closest friends, the responses of CRC veterans varied drastically from the chaplain list above. Friendships with Roman Catholics represented the largest percentage (22.3), while friendships with Baptists, Lutherans, and CRC soldiers followed further behind with 13.6, 11.6, and 10 percent respectfully.

A common term among US soldiers and veterans was “fox-hole” conversations. These usually were life-changing events or radical experiences. “Fox-hole” conversations often are assumed to occur during life-threatening moments. But, according to the CRC’s survey, most of those surveyed indicated that their “fox-hole” experiences happened in ordinary worship services. Fifty-five percent of respondents indicated that church worship in various settings contributed the most spiritual importance to their religious journey. Just five percent of the surveyed veterans said that more literal “fox-hole” events were their most significant religious experiences during the war. One soldier asserted that “there are unbelievers in fox-holes.”

Over all else, however, soldiers cited “gaining an appreciation for other faiths” as the greatest religious lesson they learned during the war. Many explained that their best friends were of different religious backgrounds. Despite their growing appreciation for other religious denominations, the soldiers did not necessarily choose to change their faiths. Fifty-four percent of those surveyed indicated they returned to the CRC in order to expand its ecumenical horizons and 65 percent said their respect and appreciation for the CRC increased. Twenty-three percent expressed discontent with the narrow definition of orthodoxy that the CRC held and one veteran asserted that the CRC should be “careful not to substitute Dutch blood for Christ’s blood.”

These numbers give us real insights into the experiences of the soldiers, but their stories tell us even more. One CRC chaplain, Sydney Newhouse, recalled a debate among soldiers over exactly when religious conversion takes place. He asserted that the Holy Spirit moves like the wind and just like a wind suddenly changing direction, we cannot find the exact moment a person’s faith changes. He also remembered a night when 23 men found themselves packed into the kitchen of a war-torn German farmhouse. He read Psalm 23 to them, and the next day the soldiers beat a path through a minefield. It was the last Psalm one of the men heard before reaching his end that day.

In June 1945, on a Sunday morning after the war had ended in Europe, Newhouse and his fellow American soldiers peered outside their billet window to the church next door, listening to the service. Hearing familiar hymns sung in a foreign language deeply affected them all, Newhouse recalled. He had never seen so many grown men crying at once.

Another veteran spoke about the overwhelming sense of God’s presence during an epiphany on a train leaving Kansas. Although he saw the doom and gloom of that day, and war ahead, seeing the stars in the sky reminded him of God’s infinite power and love.

One veteran explained he was assigned to stay in a makeshift second-floor apartment in a German farming community during a mission, sleeping the night there. The German family woke him the next morning and asked him to join them for breakfast. The father led his wife, daughter, and the soldier in a prayer. The veteran was stricken by the fact that he was a US soldier in enemy territory, sharing a humble meal with a small family whose son-in-law was fighting on the Russian front. In that moment Christian unity and love for God transcended even war.

Although numbers do not represent the full experiences of people, the data the CRC collected in its veteran survey yields a valuable picture of the life and religious experiences of soldiers during WWII. War is a lamentable thing. Although we hope to avoid it, those who must fight, and survive, often come back with a new perspective on life and faith. This survey showed us just how much a combat experience can change a person’s outlook on religion and how much the collective experience can change a denomination or nation.

This post is based on a story in the print version of Origins. For the complete story, check out “50 Years Ago: US Veterans from World War II,” by H.J. Brinks, in issue 13:1 (Spring 1995) of Origins: Historical Magazine of the Archives.