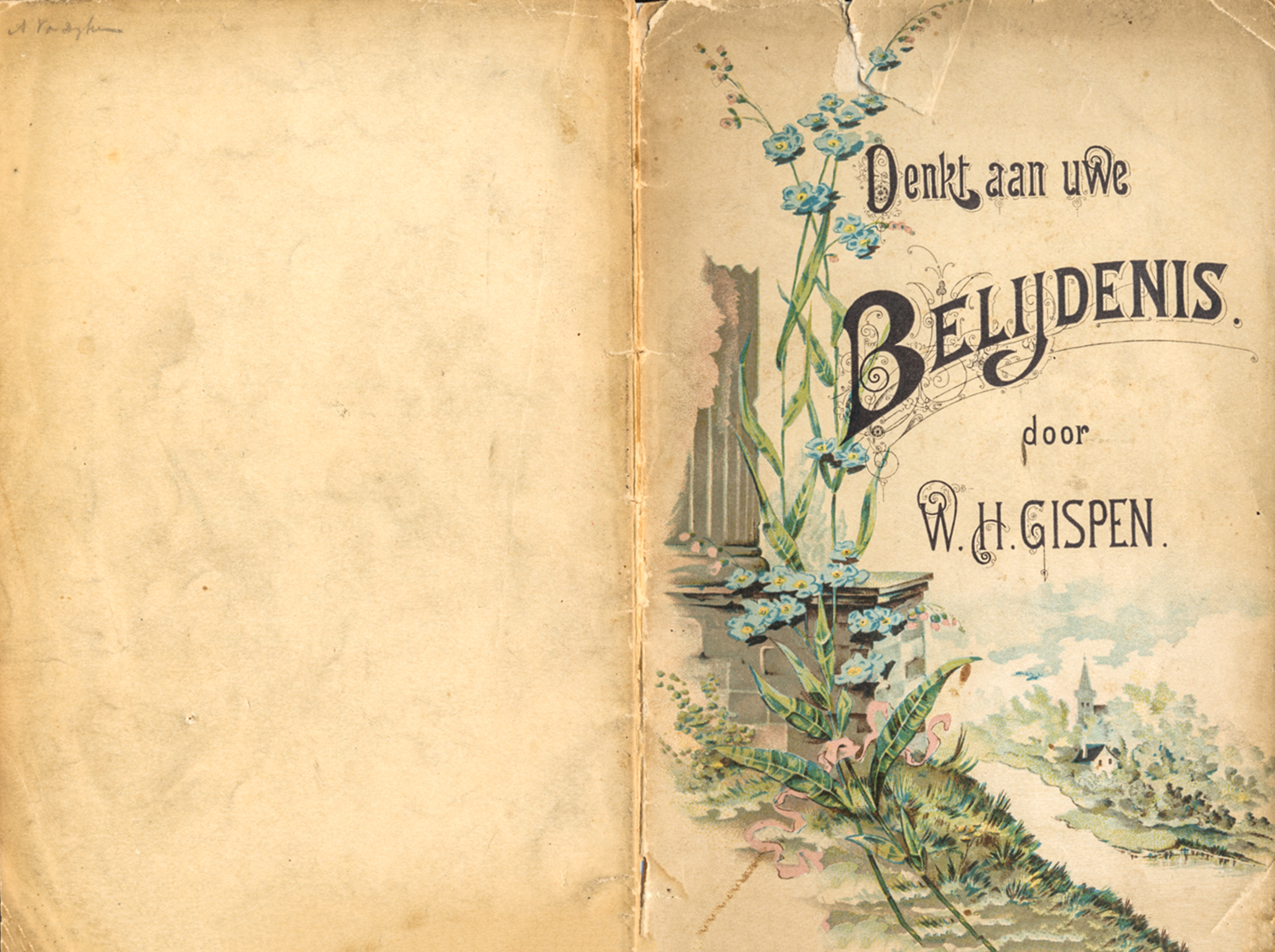 This week a patron donated a couple of small items to Heritage Hall. Our thanks to him. We often get donations when a family member finds something in the attic or wants to clear a shelf. It’s often a book, such as a Dutch psalter (a book of psalms set to music) or a Bible that has been passed down over generations. We can’t take everything, of course. Our shelves overflow! But we regularly get little treasures.

One of the items donated this week is a common type of photograph from the 1930s. It’s a portrait of attendees at the 8th Annual Convention of the National Federation of Reformed Men’s Societies, held at Immanuel Christian Reformed Church in Muskegon in April 1938. The Banner had a brief note on the event.

During this era, these kinds of photographs were popular with church groups and congregations. They also were used for landscape photography. Sometimes the images were stitched together from separate negatives. Sometimes the photographer took these pictures with a camera mounted on a tripod that used a small clock motor to “pan” the camera.

This photograph is about 36 x 8 inches. I scanned it with a large photocopier, creating three JPEGs. Then I stitched together the JPEGs in Photoshop. The left side and middle of the original photograph were a lot brighter than the right side, so I corrected some of that in photoshop.

The second item is the cover image of this post. It is a booklet, in Dutch, of the sort that Christian Reformed Church congregations gave to young women and men when they did “confession of faith” and became full members of the church.

This booklet was written by W.H. (Willem Henrik) Gispen and published in 1900 in Kampen, Netherlands. Kampen was home to the Theologische School of the Gereformeerde Kerken in Nederland. The school and denomination were “parent” institutions of the CRC and the Theologische School in Grand Rapids (later renamed as Calvin Seminary). Gispen also wrote books on law and grace, the Belgic Confession, and the doctrines of saving grace and common grace.

The title of the booklet, in English, is Remember Your Confession:  A Word to Young Members of the Church After They Have Made Their confession of Faith.

The booklet presumably was given to Anna Van Dyken by her church in 1907. It is signed by her minister, Samuel (Sietse) Volbeda. He was the “dominie” at Alpine Christian Reformed Church in Grand Rapids at the time.

Volbeda was born in the Netherlands in 1881 and with his family emigrated to the United States. He graduated from the Theologische School of the CRC in Grand Rapids in 1904 and served Beaverdam CRC (1904-1905) and Alpine Avenue CRC (1905-1911), both in West Michigan, before earning a doctorate in theology at the Free University in Amsterdam (1914). He then taught at Calvin Seminary from 1914 to 1952, serving as its president in the last part of his career.

In 1907, Anna Van Dyken was one of Volbeda’s charges. We don’t know much about her, other than that she confessed her faith that year. We don’t know whether she treasured the booklet or even read it. We can guess that she took her faith seriously and that Volveda, the church council, and the congregation took her measure in this regard. Confession of faith was a serious public statement and a commitment to the faith and a way of life, not just a coming of age marker.

We know less about most of the men in the panoramic photograph than we do about Anna Van Dyken. She would have been their age in 1935. Their presence at the convention presumably was a sign that they remembered their confessions of faith. They also presumably enjoyed the companionship and social connections fostered by men’s societies.

The photograph and the booklet are reminders of the many small acts that shape the lives of individuals and church communities: confessions of faith, meetings of men’s societies, mementos to remember events and their significance. The names associated with Remember Your Confession remind us of the connections between the “new world” and the “old,” whether those names are part of church lore, as in Volbeda’s case, or are largely forgotten except in family memories, as with Van Dyken–and the crowd of men at the convention.