The Rivals – The Origins of Basketball at Calvin 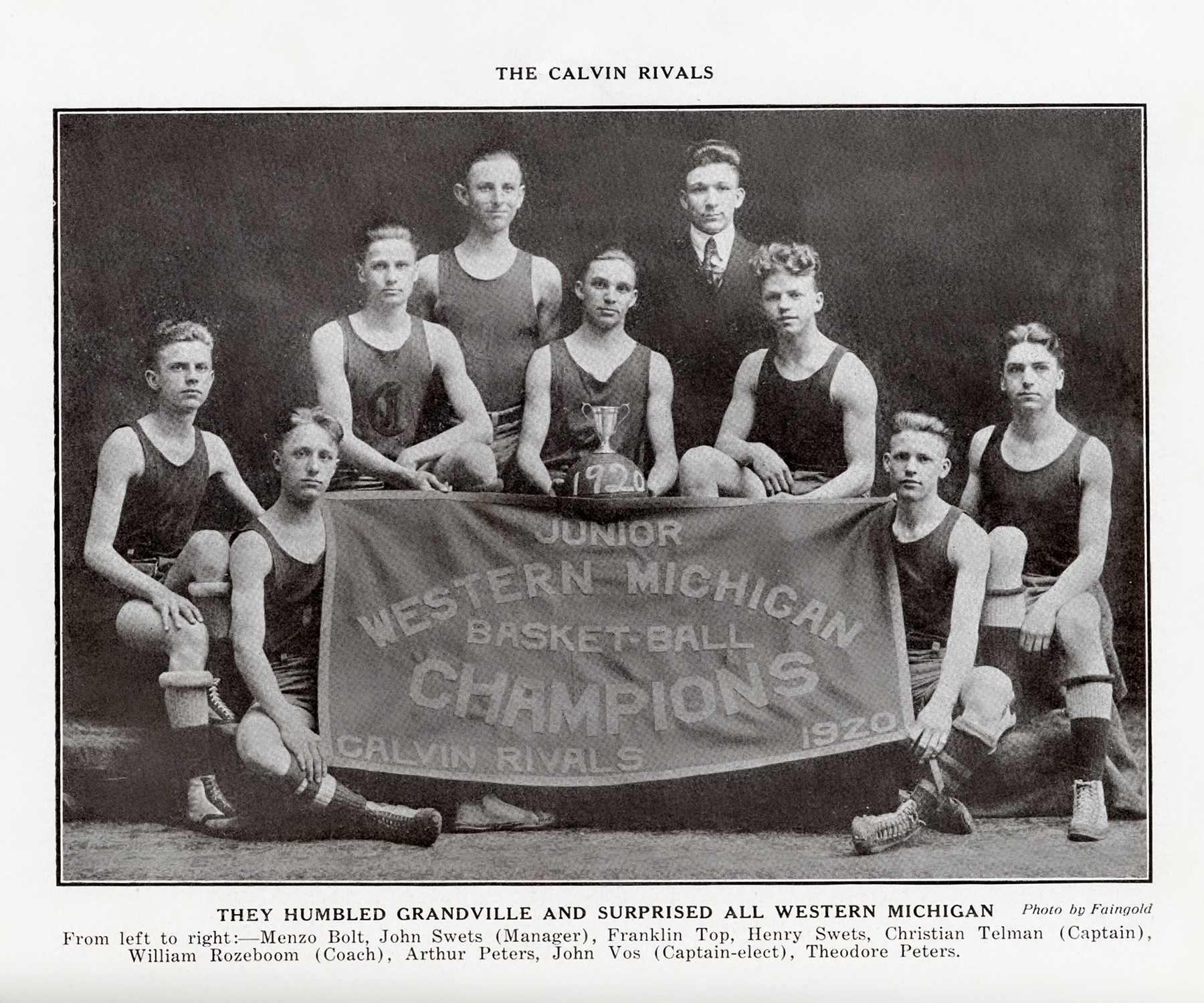 While researching the origins of the Calvin-Hope men’s basketball rivalry, I was intrigued by references to a group of Calvin students around 1920 who played basketball under the name “The Rivals.” Who were these guys? Who were they rivals for (if anyone)? And was the name in any way a reference to the relationship between Calvin and Hope?

I discovered that the Rivals were the team that gave Calvin students the confidence to finally convince the faculty to approve of intercollegiate sports on campus. But their story doesn’t end there. They were shrouded in moral suspicion.

On March 20, 1920, the Grand Rapids Press proclaimed the Rivals the best junior team (18 years old or younger) in West Michigan. Calvin College student William Rozeboom had coached this group of Calvin Prep School students to an enviable record. (The prep school soon would become a Christian high school.) The boys were short but quick and scrappy. And the newspaper’s proclamation of their prowess came with a dare. Any team believing itself better could challenge the Rivals in a play-off.

This was how basketball worked in its early decades, before official post-season tournaments. Any team that had done well by season’s end could lay claim to a title or have a sponsor do so on its behalf. Then that team could challenge or be challenged by any other team with a worthy record. This was the case with the Rivals.

A week later, the Grand Rapids Press dubbed the “Rivalettes”–a women’s basketball team at Calvin–the Champions of West Michigan. And the same challenge followed for any team of women bold enough to vie for the title. No competitors had the courage to challenge the undefeated Rivalettes, so the Calvin women retained the title.

The Rivals, on the other hand, had challengers. The Press accepted four other squads as viable candidates for the championship title—the East End Independents, the Galewoods, the Franklin Reserves, and the Second Congregationals. So the five teams engaged in a play-off. The Rivals beat the Galewoods in a three-game series and then beat the Franklin Reserves to claim the title of Western Michigan Champions.

The Rivals are often confused with another early Calvin team–Calvin YMCA. And they are part of a larger story of sports and student culture at Calvin in the 1920s.

While the college faculty and Curatorium (the trustees of the college and Theological School) began to permit intercollegiate teams to officially represent Calvin in 1920, the school’s athletic history dates back a decade. During the 1910s, Calvin students often spent free time at the Grand Rapids YMCA, making an almost three-mile trek from campus and back. By 1917, to conform to standards set by the University of Michigan, Calvin began requiring physical activity hours of its students.

Chimes, the school’s student-run newspaper, observed that while gymnastics activities took up some of these hours, most “Calvinites” played basketball. The March 1917 issue of Chimes notes that Calvin had two unsanctioned men’s basketball teams–a first team and a second team, both of which played local competition such as Grand Rapids Junior College and South Christian High School.

In December of 1917, a team of Calvin students ventured to Hope College for a basketball game and lost badly. This group of men, who had trained together at the YMCA, could not call themselves the Calvin College team. So, according to Garrett Kempers, a player on that team, they came up with the name of the Calvin YMCA to skirt the college’s prohibition of intercollegiate sports. This was not the Rivals, but the Calvin YMCA team influenced the Rivals, who began playing informally on the heels of the one-off loss to Hope.

Calvin YMCA guard William “Rosie” Rozeboom coached the Rivals. Although the origins of the team name is not known, it is very well possible that “Rivals” came from the idea that this team was created in part by the Calvin YMCA team to eventually represent Calvin in playing—and beating—Hope.

Chimes mentioned the Rivals as early as 1918, noting their games against outside teams. A photograph in Chimes from June 1919—entitled, “Rosie and his team ‘The Rivals’”—suggests that Rozeboom played a strong role in organizing and perhaps coaching the team. This foreshadowed Rosie’s future role as a leader in Calvin athletic circles, as he would serve as the business manager of Calvin’s first official Athletic Association in 1920.

In January 1920, Chimes note that Calvin College had five basketball teams, a surprisingly high level of interest for a school whose faculty still prohibited intercollegiate sports. The “Calvin College Team” was listed as defunct because it wasn’t allowed to play. A team of “Theologians” had existed for two years. There also was a “girls” team that was exceptionally talented; a girls prep team (the Rivalettes squad that won the local title that year); and the Rivals, which Chimes described as consisting of “young fellows.”

By the 1922-1923 school year, most of the original Rivals basketball team members had entered Calvin College’s undergraduate program. The Prism yearbook from 1923 mentions as much, indicating also that the team had turned into a student club.

The club’s purpose, Prism stated, was “to foster a keener brotherly love among its members, to secure one another’s welfare, and to promote the best interests of Calvin College.” This mission statement about love, welfare, and collegiality comes across as ironic, considering that the club’s name implies values such as challenge, competition, and jealousy. The team seems to have become a sort of fraternity, defining ideals in a deliberately grand fashion so as to be satirical (and perhaps to convince college officials of their good intentions). In an early unpublished draft of his memoirs, a contemporary, Garritt Roelofs, says of this group, “‘Rebels’ would not have been a misnomer.”

This quasi-fraternity continued to schedule and play basketball games, but since its members had become college students, the club’s functioning also included irregular meetings and dinners that involved singing and speeches. With this extra-basketball programming, the Rivals sought status as an official college club. This proposition, which included an official club constitution, was approved by the faculty in 1922.

Between 1923 and 1924, however, the college’s faculty put the Rivals on probation, requiring the club to prove to prove its genuineness before they would reinstate it. The Rivals petitioned for reinstatement, but the faculty were skeptical. The minutes of the 11 March 1924 faculty meeting note the “existence of irregularities” between the Rivals’ virtuous sounding ideals and constitution and what the professors thought was the unseemly reality of the club.

In November 1924, the faculty gave four reasons for denying reinstatement of the Rivals. First, it “would be contrary to school policy.” No policy was cited by the faculty, and the club’s “contrary” status was simply taken to be fact rather than demonstrated by citing details. Second, “the Rival club should have no privilege over other clubs.” It is not clear that the Rivals were asking for special privileges, but this statement implied that they were. Third, “approval of a club is no guarantee that the club will always live up to its constitution.” This speaks to the wariness the faculty had toward the club. And fourth, “the club is still under probation.”

Alongside the final rejection of club status for the Rivals came a severe reprimand by the faculty. The club’s members were not allowed to take final exams in the spring of 1925. And those who were graduating could take exams but were not allowed to participate in commencement activities.

In this fashion, the Rivals received the proverbial final nail in their coffin. It was a dishonorable discharge for the young men representing Calvin’s first basketball championship. Students in the 1920s and 1930s would continue to inspire faculty reprimands at Calvin. Nonetheless, the Rivals had tipped the scales when it came to sports, leading the college faculty to approve intercollegiate athletics at Calvin. Perhaps faculty thought that official status would allow them to better contain the rambunctious impulses of their students.

Chad Carlson is associate professor of kinesiology and director of general education at Hope College. His research focuses broadly on the socio-cultural aspects of sport, including sports history.

The images of Calvin College teams and students are courtesy of Heritage Hall. The image of the YMCA in the 1910s is courtesy of the Library of Congress.