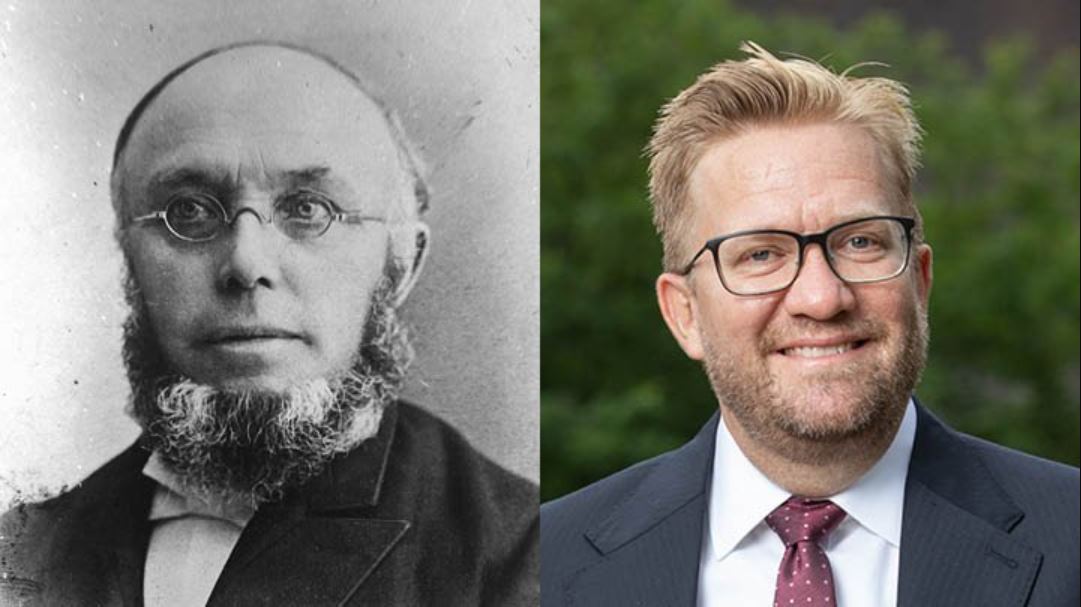 The answer to the multiple-choice question is trickier than you might think. Anyone who tells you that facts are facts is half wrong. The answer depends less on simple facts and more on the story we tell and how we decide when Calvin University originated.

Boer is the second president of Calvin University by the strictest definition. Calvin became a university in name in 2019 during the tenure of his predecessor Dr. Michael Le Roy.

If we define the school’s origins by when Calvin College became a four-year, bachelor’s degree-granting institution—in 1920—then Boer is Calvin University’s tenth president.

The board of trustees created the office in 1918, appointing Rev. John J. Hiemenga to the position in 1919. The first baccalaureate class graduated in 1921. The Theological School, as the seminary was then known, and Calvin College took on the name Calvin College and Seminary in 1930.

The first leader of Calvin College as a distinct institution was Albertus John Rooks. In 1894, the literary curriculum of the Theologische School, as Calvin Theological Seminary was then known, began admitting non-seminary students for the first time. In 1898, instruction in the literary program switched from Dutch to English.

The theological school “spun off” the literary department as a college preparatory school in 1900 and named Rooks as its principal. It admitted its first women students in 1901.

In 1906 the preparatory school became John Calvin Junior College with a three-year program. In 1914, Rooks began the process of developing a four-year curriculum for Calvin College. If Rooks was the first leader of Calvin, as its principal in the 1900s and 1910s, then Boer is Calvin University’s 11th president. We’d be conferring the title of president on Rooks in retrospect.

The deep origins of Calvin University go back to 1876, when the Hollandsche Christelijke Gereformeerde Kerk (Dutch Christian Reformed Church) founded the Theologische School to train clergy for the HCRC. It also offered literary training for young men not ready for the school’s theological program. Synod called and appointed Rev. Geert Egberts Boer to be the first professor at the Theologische School.

If G.E. Boer was the first leader of the theological school and its literary preparatory program, which evolved into the seminary and university we know today, then Wiebe Boer is the 12th president of Calvin University. We’d be conferring the title of president on G.E. Boer in retrospect. That seems especially appropriate since Wiebe Boer is a distant relation of G.E., a few generations removed.

The deep story of Calvin University and its leaders thus goes back to 1876 when a Dutch immigrant denomination—the Hollandsche Christelijke Gereformeerde Kerk—founded the Theologische School with a literary preparation program. Everything followed from that. Of course, that story too has deeper roots still in the longer history of Christianity and Christian education.

The vision of the literary program, junior college, baccalaureate college, and university have evolved to meet the needs of their times. Today Calvin University is a diverse institution, with students from many ethnic and racial backgrounds and Christian traditions. They come from around the world. Geert Egbert Boer was a Dutch immigrant to the United States. Wiebe Boer is a U.S., Canadian, and Dutch citizen who was born in Nigeria to parents who graduated from Calvin College and Calvin Theological Seminary. Boer also worked and lived in Nigeria for many years as an adult. If the vision of Calvin University has evolved, its mission remains the same.

And for these reasons, we have decided that Wiebe Boer is the 12th president of Calvin University. But perhaps we should have had a fifth choice: “All of the Above.”

The two photos, of course, are E.G. Boer and Wiebe Boer. First and twelfth presidents of Calvin University, as I’ve told the story.

This blog post was published first as a story in the “News & Stories” section of the Calvin University website.