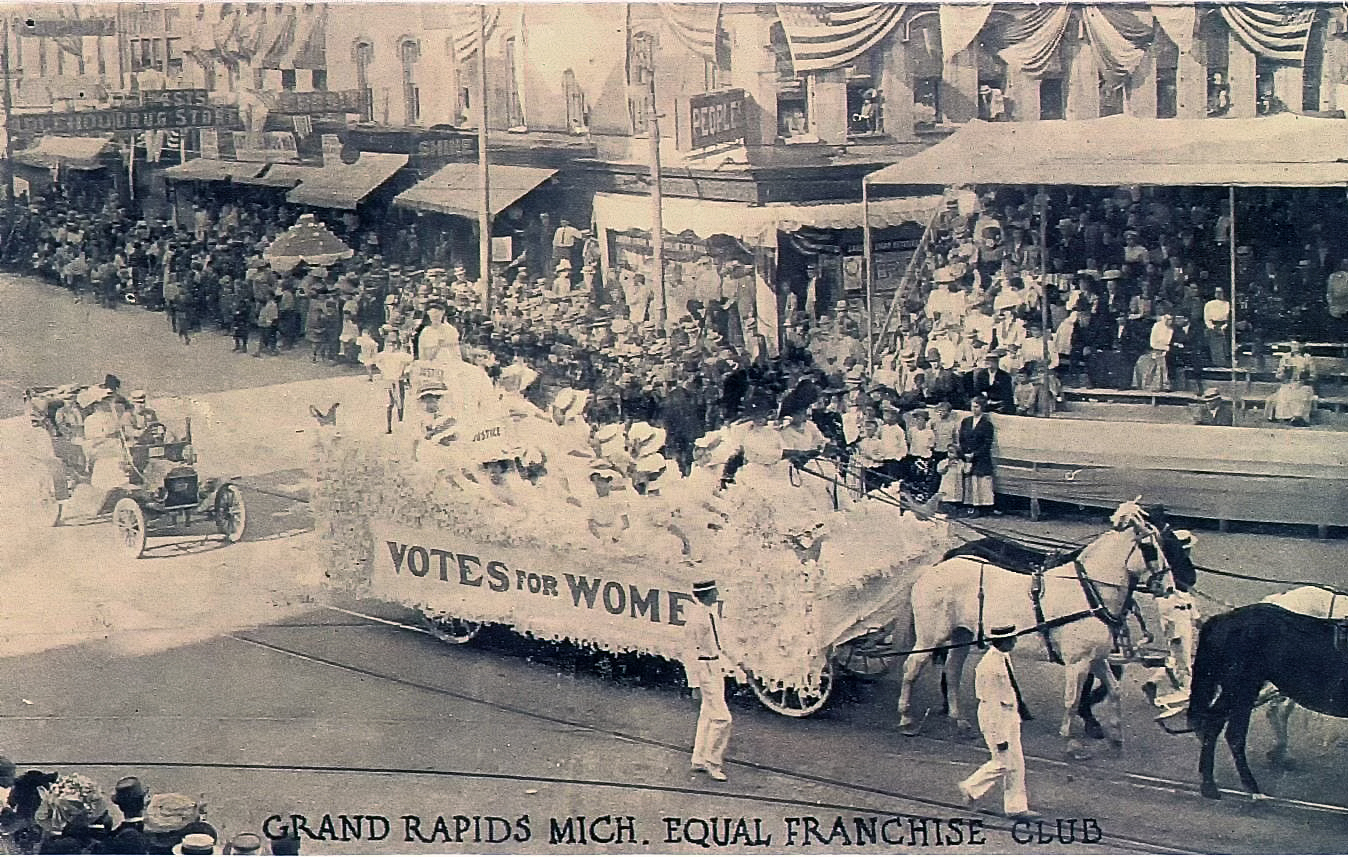 In our last blog post, we looked at a general overview of Reverend Johannes Groens’s life and ministry. We saw that Groen was a dynamic speaker who was loved by many who knew him. We also saw that conflict characterized parts of his ministry. In this post, we will take a closer look at some of that conflict, especially in relation to the issues of women’s suffrage and union membership.

Dutch Reformed immigrants in West Michigan, like other residents, wrestled with the disruptive, changing currents of modern life. Among the most controversial issue were changing roles for women and responses to labor conflict. The waves of Dutch immigrants from the mid-nineteenth century to the early-twentieth brought a mix of mostly conservative folk, but a minority were more progressive, especially in later waves. Changes in the U.S. came with an American cultural “accent,” of course, but they were similar in important ways to changes taking place in the Netherlands.

Issues regarding women’s suffrage generated some of the strongest antipathy that Groen faced. During the first two decades of the twentieth century, most people in Christian Reformed circles felt that the Bible spoke against women voting. In 1912, Calvin professor Jacob Vanden Bosch argued in The Banner that since the Bible seems to designate men as the heads of households, it ought to be men, not women, who speak on behalf of the nation’s households in the voting booth. In 1913, in an article entitled “Congratulations,” Christian Reformed minister Rev. John Vander Mey commended the voters of Michigan for having recently voting down a proposal in favor of women’s suffrage.

In this same article, Vander Mey wrote: “It has been deeply lamented, and there has been strong disapproval that several pastors defended the women’s party.” Here he undoubtedly had Johannes Groen in mind. Groen had delivered a lecture from his pulpit at Eastern Avenue CRC in which he forthrightly defended the cause of women’s suffrage.

Groen’s speech made the case that the subordinate position of women arose from sin rather than from some divine creation ordinance. Groen likened this subordination of women to slavery and exhorted his audience to “militate” against it “with all our might.” Groen also made the case that “since schools, child labor, playgrounds, amusements, manufacturing of clothing, preparation of food, the saloon, morals, [and] wages all belong to the women’s sphere . . . she has a right to assist in regulating them.”

This speech was condemned in the Grand Rapids Press by several Christian Reformed ministers. This did not deter the strong-willed Groen, however. He continued to author pro-suffrage articles and give speeches. Much to the chagrin of many within his own congregation, he even facilitated the use of Eastern Avenue’s sanctuary for pro-suffrage meetings. At one point, some congregants circulated a petition castigating Groen for unscriptural views.

This conflict reached a climax when a neighboring consistory brought a formal complaint against Groen and his pro-suffrage actions to the 1913 meeting of Classis Grand Rapids East. The classis had so many spectators eager to witness the “Groen case” play out that the meeting had to be moved to a larger building. Groen spoke in his own defense at the classis meeting, as might be expected. He argued that political opinions were not an “ecclesiastical matter” and that he had the right to speak on social positions whenever he deemed it necessary.

This defense did not win Groen any friends, but the classis dropped the case. At Synod in 1916 the Christian Reformed Churches would rule along the same lines of Groen’s argument, judging that “Women’s voting right is a purely political question and does not belong in the terrain of the Church.” Although many in the denomination still opposed women voting, suffrage as such no longer could be considered a transgression against official church teaching.

In addition to his stance on women’s suffrage, Groen also took up the cause of labor unions. Between the years 1881 and 1914, twelve Christian Reformed synods had dealt with issues regarding union membership. They had all come down against it.

Despite this, when there was a large strike in Grand Rapids in 1911 among furniture factory workers, Groen supported the strike action. (Some Christian Reformed members were part of the union, a few even leaders.) Three years later, Groen served on a study committee for the 1914 Christian Reformed Synod and wrote a minority report which made a bold case for labor unions and against the abuses of capitalism. In 1917, at the invitation of a local union, Groen delivered an address that argued that Christianity and labor unions could be compatible. This furthered his unpopularity among his more conservative church members.

Though Groen often took progressive stances on social and political issues, he also was very much a son of his rigorously Reformed denomination. He held to supralapsarianism, a theological position sometimes labeled as “hyper-Calvinist.” He warned against “liberalism” in American churches. When it came to Church discipline and Sabbath observance, “he was as stern as any other.” Looking back on Groen’s life in 1953, Jacob Vanden Bosch characterized Groen’s thinking and life as those of a “progressive conservative.” Groen had a “dislike of anything stagnant” and held a firm conviction that his views would serve for the betterment of his denomination and society.

Christian Reformed leaders and laity shared a firm theological orthodoxy in the early-twentieth century. But they differed in their response to the currents of modernity. Most saw much to oppose and resist and criticized “worldliness” in American life. Others, like Groen, found things compatible with the gospel and Christian tradition, responding with interest to ideas they thought Reformed Christians could make their own.

The differences—and conflicts–between more socially progressive Dutch Reformed folk like Groen and conservative ones would continue to shape the denomination—and Calvin College and the Seminary—through the twentieth century and into the twenty-first.

The cover image for this post is of the women’s suffrage club float in the city’s 1910 Homecoming Parage. Eva Hamilton, who went on to become the first woman in the Michigan State Senate, held the reins.

This post is based on a story in the print version of Origins. For the complete story, check out “Johannes Groen: Groen in West Michigan Society,” by Harry Boonstra, in issue 23:1 (Spring 2005) of Origins: Historical Magazine of the Archives.