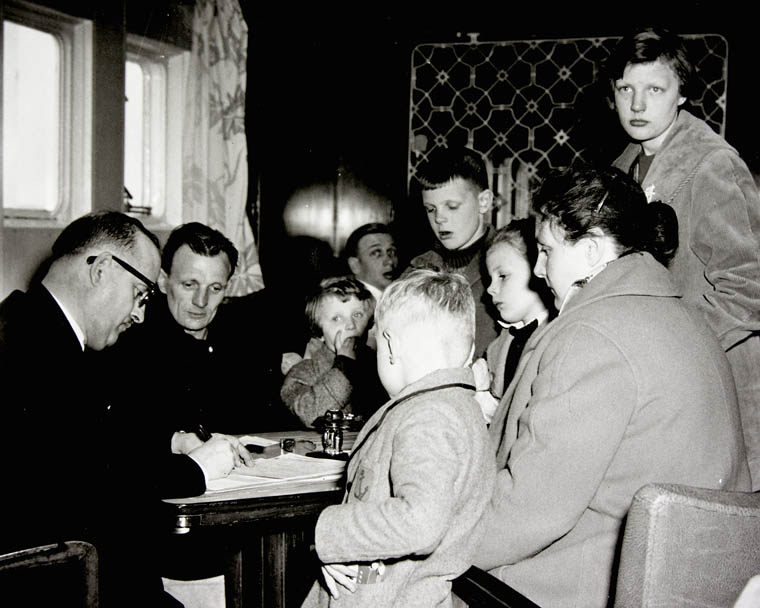 “Immigration is taking place under greatly changed situations, and in a different land. So in that very real sense, history is not repeating itself.”

If you read this quotation with current headlines in mind, you might have wondered whether it is about debates over immigration to the United States today–from Central America, Africa, or the Middle East.

That is a reasonable guess. But it’s wrong.

The Christian Reformed Church (CRC) was helping recruit these immigrants (as an earlier blog post about my maternal grandfather and his family shows). My mother’s family was part of that wave of immigrants, arriving in 1949.

Some people in the CRC worried about foreign influences on the denomination, however. Part of this worry was cultural differences between recent Dutch immigrants and assimilated Dutch Americans whose families had come decades earlier. Part of the worry was strains of Reformed Christianity with flavors subtly different from those familiar to people in the heartlands of the American CRC.

The Banner (the weekly magazine of the CRC) discussed the new wave of immigrants in a series of articles from the late 1940s to the mid-1950s. Here are a few examples.

In “The Canadian Melting Pot,” in September 1952, John C. Verbrugge discussed how Dutch Americans had “melted” into American society. He wondered how that story would play out in Canada. He also noted that Reformed Christianity had evolved in distinct ways in the Netherlands and the U.S. since the waves of Dutch immigrants to the U.S. in the late 1800s and early 1900s. The immigrants and assimilated Dutch Americans in the CRC would have to adjust to each other.

“The adjustment involves not only a matter of language but of customs and traditions,” Verbrugge observed. And, more importantly, the adjustment will be “denominational in scope.” “The truth of this assertion,” he explained, “will become increasingly evident in the future at Classical meetings, Synodical assemblies, and such organizations as the Young Calvinist Federation.”

Verbrugge described the challenge for the CRC in his “melting pot” article. He followed up in December 1952 with advice about what to do in an essay called “Each Counting the Other Better.” Assimilated Dutch American and newly arrived Dutch immigrants to Canada might find each other strange. But these strangers could learn from the best of each other.

I understand this “adjustment.” The child of Dutch immigrants to Canada, I found Calvin College and the CRC in West Michigan strange when I arrived on campus in the late 1980s. Calvin was not weirdly “Dutch” in my experience; it was weirdly “American.”

“Holland immigrants” to Canada and “old-timer” Americans would have a “modifying influence” on each other, Verbrugge hoped. “Different ways” are not necessarily inferior. “We must absorb one another’s cultural strength.” “The ability to use two languages is not a liability but an asset, an enrichment.” Such an approach would lead to “the more glorious development of the Church and the Kingdom.”

This adjustment would not be easy, even for people who shared Dutch and Reformed roots, Verbrugge acknowledged in his September article. “When two or three rivers join to make one larger stream, the waters are turbulent for a while. Farther downstream the water flows smoothly again. If this is kept in mind, it will be possible to work with confidence toward the strong fusion of the divergent elements; and the Christian Church of America, in the United States and Canada, will grow internally and exert a blessed influence externally.”

The Banner did not just discuss Dutch Reformed immigration. It also addressed the larger context of immigration history and policy in the U.S. In “The Problem of Immigration in the U.S.A.” (March 1954), John M. Vander Kieft responded to recent legislation that had revised U.S. immigration policy. He criticized both the “National Origins Act” of 1924, written after World War I at the height of anti-immigrant agitation, and the modest revision of 1952.

U.S. legislation from the 1920s to the 1960s was defined by “national origins” quotas. These quotas were designed to maintain the ethnic and racial makeup of the nation. They discriminated against immigrants from eastern and southern Europe and favored those from northwestern Europe. Early-twentieth century legislation closed the door to immigration from Asia entirely.

Vander Kieft condemned the racism of national origins quotas on Biblical grounds. He called CRC folk to support policies shaped by Christian values. “Let us as Christians not fail to see [the problem of immigration] in the light of the coming Day,” he wrote. “In a world of increasing woes we must respond to the command to love and show mercy in this life, imitating him.”

These stories in The Banner on a small scale reflect the hopes, fears, and debates that shaped the United States and Canada both when it comes to immigration. People often notice even small cultural differences, even among fellow Reformed folk from the Netherlands. And they experience turbulence.

The Banner‘s stories also reflect a familiar pattern: the descendants of immigrants often forget their own experiences of prejudice. Some Dutch immigrants faced anti-immigrant sentiment, even violence, during World War I. Some of their descendants were worried about the new immigrants from the Netherlands after World War II, with their ethnically and religiously foreign ways. For their part, as in the past, the new immigrants brought a wariness about America (and Canada) with them from the old world. I brought mine with me as a Dutch Canadian student to Calvin College in the 1980s.

History does not teach us simple lessons. And it does not repeat itself, as Verbrugge noted in 1952. But the past can be a “different mirror” that we hold up to get perspective on ourselves. I agree with Verbrugge that it is dangerous to “refuse to let the past teach us” and foolish to forget the past. In this case, the danger is that we forget that we too once were strangers in the land.

The cover photo for this story is from Library and Archives Canada. The caption says: “Here an Immigration Officer examines a Dutch family of seven onboard S.S. Groote Beer as they approach the Port of Quebec in May 1956.” The “Groote Beer” was a famous transport for Dutch immigrants to Canada after World War II, my father’s family among them in the mid-1950s. Like many immigrant transport ships, it started as a troopship in World War II. I remember reading about it as a child.